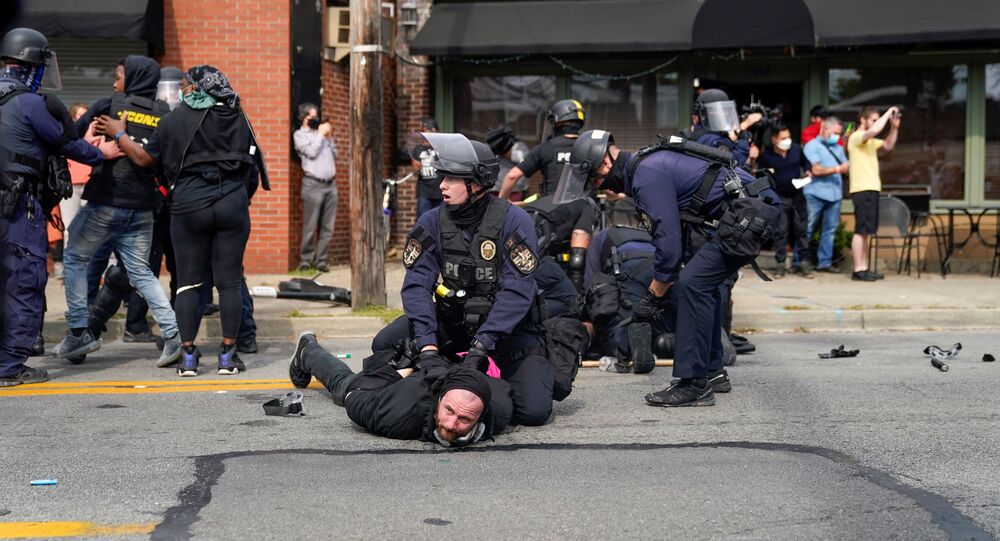 Earlier in the day, US federal agents, along with members of the Kentucky National Guard, were deployed in Louisville to help curb the potential for unrest that could follow an announcement that the police officers involved in the killing of an African-American woman, Breonna Taylor, would receive no criminal charges.

The city of Louisville saw clashes between US police and protesters after it was announced that police officers involved in the killing of Breonna Taylor would not be prosecuted for her death.

Earlier in the day, Kentucky Attorney General Daniel Cameron said the use of deadly force by two police officers involved in Taylor's killing was justified, in order to protect themselves, indicating that, in his legal understanding, state law prohibits his office from pursuing criminal charges against them.

Minor clashes with police begin after riot police move in to make arrests. This is just the beginning for Louisville PD pic.twitter.com/EiPnn5bzEo

The National Guard is on standby in Louisville as the city braces for severe unrest in the wake of the Breonna Taylor announcement #Louisville #BreonnaTaylor pic.twitter.com/roViaqE6Lt

​Other footage revealed protesters near the Breonna Taylor memorial in downtown Louisville lighting trashcans on fire and expressing outrage after a grand jury decision to indict one former police officer for endangering residents who lived in an apartment next door to Taylor's, where the fatal police raid happened in March.

An African-American woman, Breonna Taylor, 26, was shot dead on 13 March after police officers mistakenly stormed into her apartment in what appeared to be a "no-knock-warrant" raid, while looking for two suspected drug dealers.

While no narcotics were found in Taylor's apartment, cops, according to Taylor's boyfriend who opened fire at them, failed to identify themselves as police and fired multiple shots, five of which struck Taylor.

Her killing, along with that of an African-American Minneapolis resident, George Floyd, in May, sparked a new wave of nationwide protests against racism and police brutality in the United States.