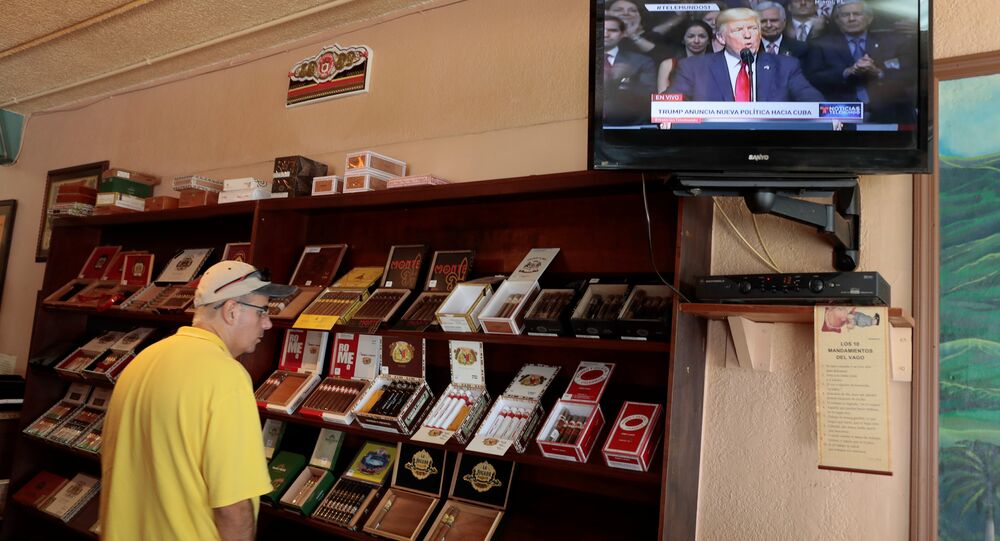 The trade restrictions against Cuba have been prolonged for another year "in the national interest of the United States", according to a US presidential determination issued by the White House on 10 September.

US President Donald Trump has announced new sanctions on Cuba.

"Today, as part of our continuing fight against communist oppression, I am announcing that the Treasury Department will prohibit US travellers from staying at properties owned by the Cuban government. We're also further restricting the importation of alcohol and Cuban tobacco", Trump said in a statement.

“These actions will ensure that US dollars do not fund the Cuban regime and go directly to the Cuban people", Trump added.

The statement comes after US President Donald Trump on 10 September extended trade restrictions against Cuba for one year.

Prior to this, US Secretary of State Mike Pompeo announced in August that Washington had banned private charter flights to Cuba except in some limited cases, such as for medical purposes. According to Pompeo, the move was made in order to cut the revenue that the Cuban government obtains from landing fees and stays at government-owned hotels.

In 2014, the United States and Cuba expressed their intention to begin working on improving bilateral relations. Then US President Barack Obama lifted many restraints that the United States had imposed on Cuba, including travel restrictions.

© AP Photo / Ramon Espinosa
Cuba Ends War With Dollar in Attempt to Kickstart Economy Amid US Sanctions Pressure, Coronavirus
However, current US President Donald Trump toughened the policy once he came to power in 2016, limiting travel, boosting the economic embargo on Cuba, and imposing sanctions on Cuban officials.

The United States terminated diplomatic ties with Cuba in 1961 in response to the nationalisation of American property on the island. Following the severing of relations, Washington declared the imposition of a trade and economic embargo against the Caribbean country. Since 1992, Cuba has annually submitted to the UN General Assembly a draft resolution on the need to withdraw the US embargo. Most members of the international organisation invariably vote in support of the document.