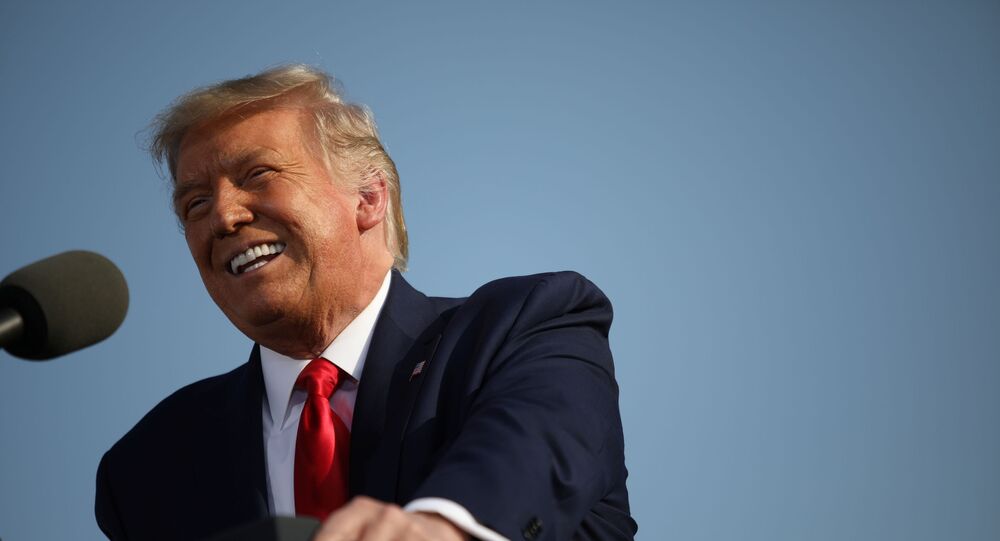 Months away from the November presidential vote, yet another woman, Amy Dorris, who was reportedly introduced to Donald Trump in 1997, has come forward, accusing him of accosting her at a national tennis event that same year, with the claims dismissed by POTUS' legal team as another bunch of the election-associated  lies nobody would listen to.

Former model Amy Dorris, the latest woman to have accused President Donald Trump of sexually improper behaviour, appears to have been in touch with the then-real estate entrepreneur for over a year after he allegedly tried to shove his tongue down her throat, getting “very gropey” with her as the two attended the 1997 US Open tennis competition in New York City, the Daily Mail reported, citing exclusive sources.

According to the husband of her former roommate, Dorris, now 47, continued to regularly – and calmly -  speak  to Trump over the phone at the apartment in Boca Raton, Florida, which she shared with two other women for over a year after the “groping” incident.

“Amy never talked about Donald Trump like she was scared of him,” said Stacey Plymale, who now lives in a remote suburb of West Palm Beach, stressing the tone was in no way suspicious and implied that nothing had happened.  “It was a surprise to hear her story,” she said.

Stacey’s husband, personal injury lawyer Shaun Plymale, also overheard the discussion, saying he was dating Stacey at the time she lived with Dorris and another woman and remembers seeing Trump's name on the caller ID of the condo's landline phone.

“I know it was for Amy because she was the only one who had those connections,”  he claimed, explaining it with Amy’s work specifics:

“She was modelling in South Beach and she was in those circles. It wasn't uncommon to hear her talk about celebrities,” the man said, adding he also remembered discussions around the time about Dorris joining Trump on his jet to New York for the landmark tennis event.

Three people - Donald Trump, Amy Dorris and her then-boyfriend, Miami publisher Jason Binn - were at Trump’s VIP box at the US Open in New York City in 1997, when Dorris alleges the then 51-year-old businessman sexually assaulted her.

In a much publicised recent interview to The Guardian, Dorris, the mother of 13-year-old twins who is now going through a divorce from her long-time husband, said she felt “sick” and “violated” after the alleged assault at the national tennis centre on 5 September 1997.

*Another woman comes forward to accuse Donald Trump of sexual assault, according to @guardian.
*Former model Amy Dorris says alleged assault occurred at US Open in 1997.
*”His hands were very gropey…”https://t.co/UVGsPPUOiJ pic.twitter.com/2BoXuM77So

Trump's legal team vehemently denied the claims of the woman, who said Trump forced his tongue down her throat and held her in a “tentacle” grip that she could not escape.

“He just shoved his tongue down my throat and I was pushing him off,” Dorris recounted, 23 years after the alleged assault, saying it happened despite her boyfriend’s presence. “And then that's when his grip became tighter and his hands were very gropey and all over my butt, my breasts, my back, everything,” she went on.

Dorris, then aged 24, was reportedly introduced to Trump a short while before the tournament by her journalist-boyfriend at Trump Tower.  Two days after the alleged incident, on 8 September, 1997, Dorris said she attended a memorial service for Gianni Versace with Binn and Trump.

Asked why she went on spending time with Binn and Trump in the days after the alleged assault, Dorris said: “I was there from Florida and I was with Jason. I had no money, nowhere to go. We were going from event to event and it was overwhelming.” She stressed that  she did not fully process what had happened until later, further choosing not to come forward with her accounts in 2016 over concerns it could harm her family.

“People spend years around people who have abused them, that’s what happens when something traumatic happens, you freeze,” she claimed.

Lawyers for Trump said Dorris’s version of events did not stand up to any scrutiny and had there been any inappropriate behaviour by Trump in the VIP box, there would have been numerous witnesses. They argued that it seemed incredible that Dorris would voluntarily opt to be in the vicinity of Trump, further on at the Versace memorial, just a couple of days after the alleged assault, adding Binn had raised similar questions about Dorris’s account.

Cardi B, Her Sister Reportedly Sued For 'Defamation' After Exposing 'Trump Supporters Harassment'