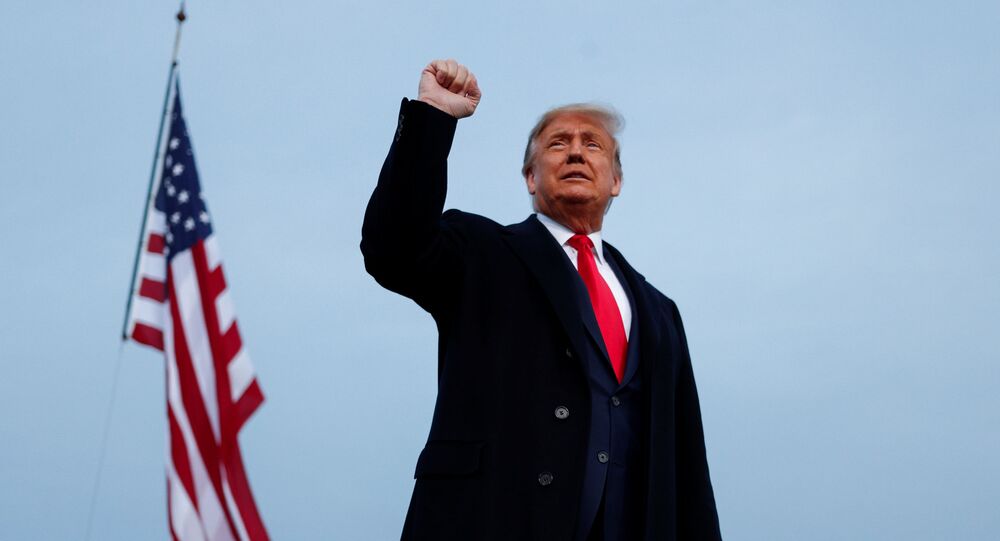 The death of Associate Justice Ruth Ginsburg has added to the political polarisation in Washington: while Donald Trump is about to fill the Supreme Court seat, Democrats are appalled at the prospect of a court controlled by conservatives for decades to come. US academics have discussed potential scenarios of how the partisan struggle may evolve.

Trump's potential nominee is likely to push the current conservative edge over liberal justices in the Supreme Court from five-versus-three to six-versus-three. Democratic politicians have subjected the president's plan to criticism, arguing that he should suspend a confirmation vote. To justify their stance, they cite a 2016 precedent when Senate Majority Leader Mitch McConnell refused to consider the candidacy of Barack Obama's Supreme Court nominee, Merrick Garland, just before the election.

For his part, on Sunday, Democratic presidential nominee Joe Biden lambasted Trump and the GOP for nothing short of "abuse of power". However, the conservatives retorted that in 2016 Biden himself argued that it's the Senate's "constitutional duty" to give the president’s nominee a vote.

Battle Between Dems & GOP is Likely to Escalate

"The likelihood is this will be a bitter battle between Republicans who will push for Trump’s nominee to be appointed before the election and Democrats, who will argue that since Republicans prevented Obama from appointing Merrick Garland in 2016, Republicans should wait to see who wins in November", observes Emma Long, a senior lecturer in American Studies at the University of East Anglia.

Since Republicans have the majority in the Senate to vote on a nominee, Trump may get his third appointment no matter what the Democrats do, she suggests, adding that Democrats can try to delay but it’s not clear how successful they can be.

"That said, it may spur on both sides in the election and it throws a new issue into the debate about who wins in November," Long remarks.

President Trump is likely to name a nominee on Friday or Saturday, predicts Charles Anthony Smith, professor of political science and law at the University of California Irvine. He expects that the Democrats will be reaching out to some Republican senators informally to urge them not to allow a vote. At the same time, "if Senator McConnell pushes through a vote before the election, his chances of being Majority Leader in January probably drop," Smith suggests.

Nevertheless, McConnell has repeatedly signalled that the Senate will vote on Trump's nomination for the Supreme Court this year. Despite being accused of "hypocrisy" by Democrats, GOP politicians insist that the 2020 case is different: while in 2016 the White House and Senate were controlled by opposite parties and only voters could break the deadlock between them, now there's no controversy between the Republican-controlled Oval Office and the Senate.

Why Barbara Lagoa Appears a "Better" Pick for Trump

The question then arises as to who Donald Trump's pick to replace Ruth Ginsburg will be. The president has already offered a hint by saying that it would be "a very talented, very brilliant woman".

"The conventional wisdom that it will be Amy Coney Barett is probably wrong", says Smith. "I expect President Trump to consider the Electoral College impact of his choice. My guess is he will nominate Barbara Lagoa, a Cuban-American from Florida."

First, Lagoa has "a shorter record and fewer controversial public statements", according to the political scientist.

Second, she is from Florida which is currently a "toss-up": "Trump can't lose Florida and her nomination might activate the Cuban American community there," he stresses.

Among other candidates reportedly considered by the Oval Office are deputy White House counsel Kate Comerford Todd and Joan Larsen, an American attorney currently serving as a judge with the US Court of Appeals for the Sixth Circuit.

How Trump's Move Can Change The Domestic Balance of Power

The appointment of a new conservative justice by Donald Trump is seen by the Republicans as a leverage which will help motivate their supporters to vote in November, "especially after some of the Court’s rulings went against them this summer", Emma Long presumes.

As for the Democrats, they hope it will do the same for their supporters, she notes: they will try to get more votes in the Senate to stop this from happening in the future.

Charles Smith believes that Dems' fears over a conservative taking the sixth seat in the Supreme Court are overestimated: in fact, conservatives already have a bulletproof majority of five votes.

"If another conservative is added to the Court, there really is no difference between a 6-3 ruling or a 5-3 ruling", he underscores.

If the vote is pushed through and Democrats take control of the Senate, then one can expect a few things to happen, he foresees:

·         Second, there will probably be an expansion of the judiciary, which hasn't happened since Jimmy Carter was president.

·         Third, there may be an expansion of the Supreme Court by two - which would be the number of seats Democrats believe should not have been filled by President Trump.

However, the political scientist doubts that the necessary background checks and vetting, as well as hearings for Trump nominees in the Senate could occur before the election. He expects that the vote on the president's pick will not occur until after the election, when the future balance of power in the Senate and Oval Office would become clearer.