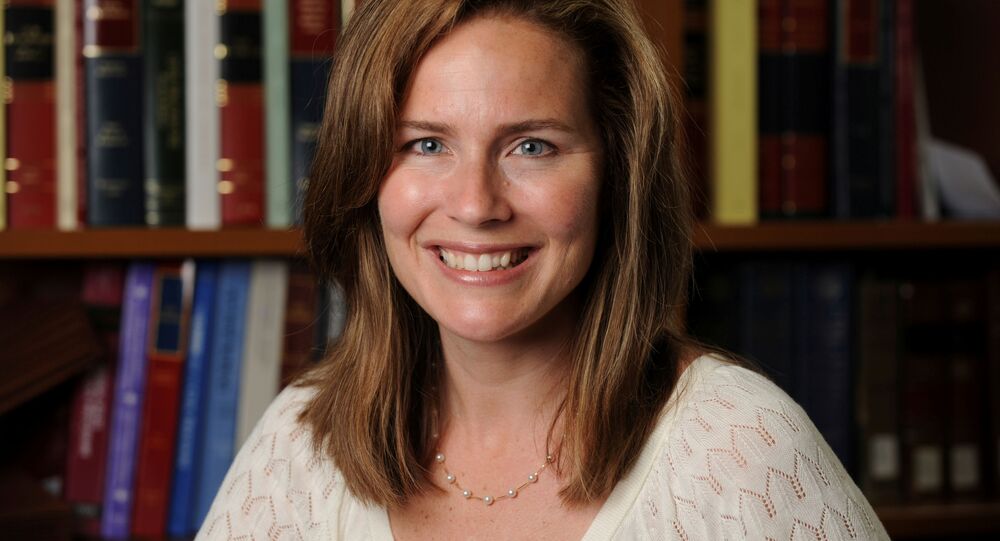 A vacancy at the US Supreme Court emerged following the death of Ruth Bader Ginsburg, who died on Friday of metastatic pancreatic cancer at the age of 87.

Judge Amy Coney Barrett is viewed by some in the US media as an early favourite candidate for the US Supreme Court, which is reportedly echoed by US President Donald Trump, who, according to Fox News, met Barret on Monday.

Trump said he will announce his candidate by the week's end, after services for Ginsburg, who passed away on Friday, are over. He earlier said that he intended to pick a female candidate for the SCOTUS vacancy.

"She’s one of the people that’s very respected, but they’re all respected," Trump said, commenting on potentially picking Barrett as his candidate. "She is certainly one of the candidates, yes."

According to Bloomberg, Trump described Barret as "a smart, hard-nosed, conservative jurist who would also come across well during televised confirmation hearings". He is also reportedly confident that she "won't be wobbly" on major conservative issues including abortion, gun rights and health care.

Barret, 48, is anti-abortion and a Roman Catholic. She was one of Trump's finalist candidates for former Justice Anthony Kennedy's spot in 2018, but the position was taken by Justice Brett Kavanaugh. According to reports, Barret is also considered to have an advantage because she previously underwent the vetting process.

Apart from Barret, reports say that the White House is also considering Appeals Court Judge Barbara Lagoa, a Cuban-American from Florida. Regarding her candidacy, Trump said that she is "highly thought of", pointing out that he does not know her, but "I hear she is outstanding".

Media sources outlined, however, that Lagoa comes second after Barret, with Bloomberg alleging that Trump "expressed scepticism" over her conservative credentials, since she drew 27 Democratic votes when appointed at the Eleventh Circuit Court of Appeals.

Trump earlier told Fox News that he has a list of four or five finalists and will announce his candidate by Saturday.

“I’m looking at five [potential nominees] very seriously and making a decision either on Friday or Saturday. I will announce it either Friday or Saturday,” Trump said, later telling reporters at the White House that he was zeroing in on one or two candidates among five considered.

A seat in the Supreme Court became vacant after the passing of Justice Ruth Bader Ginsburg, 87, who died Friday of metastatic pancreatic cancer. Trump's move to quickly fill the vacancy has met criticism from some Democrats who insist that the November election should be held first, and then the winner can choose a new SCOTUS candidate.

Trump, however, dismissed arguments and asserted "that would be good for the Republican Party, and I think it would be good for everybody to get it over with". His party expressed support for his move to fill the vacancy before the presidential election.

Trump’s Taxes Still Hidden After SCOTUS Ruling, But for How Long?