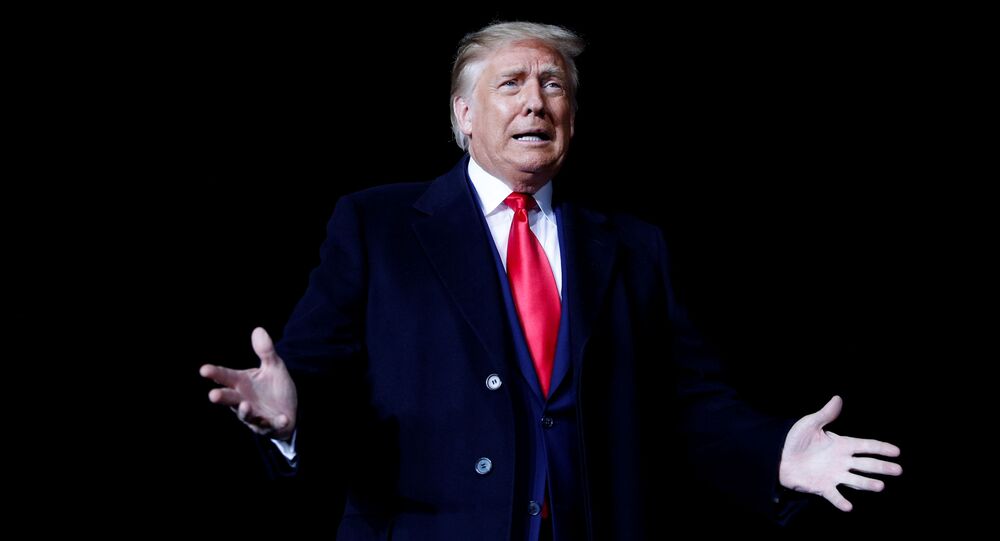 US President Donald Trump called his Democratic Party rival Joe Biden a "dummy" in the dummy, saying defeated 2016 candidate Hillary Clinton was the "smart one" of the two. But Trump admitted that Biden was more popular than his predecessor.

US President Donald Trump has warned that he will not tolerate violent unrest against his presidency if he is re-elected in November.

In an interview with The Dan Bongino Show podcast, released on Sunday, Trump was asked about threats of nationwide disorder if he wins the November 3 election.

Bongino pointed out that the Transition Integrity Project think-tank had already predicted a "street fight" if Trump is elected for a second term of office.

"We want to win, and once we win, we’ll take care of business," the president replied.

Bongino also referenced an opinion piece last week by Wall Street Journal columnist Peggy Noonan. Noonan warned chances were high of the big two parties contesting the election result, highlighting that both Trump and his Democratic rival Joe Biden have accused the other of plotting to steal the election.

© AP Photo / Paul Sancya
Chuck Schumer Backs Bernie Sanders' Call For Regime Change Plan To Force Trump From Office
"What many people will fear in such an atmosphere is the possibility of violence", she wrote. "We’ve just been through a round of street violence this summer. It is not beyond imagining that in a tense national environment we would see it again.

"Maybe it will be Black Lives Matter and antifa versus white nationalists and QAnon. Maybe it will include honestly enraged citizens who believe their side was wronged," Noonan speculated.

"Yeah, they're going to do something Dan, something's going to happen", Trump said. "They're going to screw it up with the ballots" adding that Democrat-governed states had sent out an estimated "50 to 80 million unsolicited ballots" to voters by post.

But he said his campaign was already making progress in court challenges to those moves, including in Pennsylvania.

And he accused "crooked" polling companies of trying to suppress the vote among his supporters by inflating support for Biden .

"These polls are crooked. They are suppression polls, meant to depress the voter and even the candidate," he said. "We didn’t get too depressed last time. Last time, it was worse. Going into election day we were down in eight or nine swing states... and we won every one of them."

The president also compared Biden unfavourably to former secretary of state Hillary Clinton, who Trump beat easily in 2016 despite polls indicating she would win.

He said Clinton was "such a different candidate from Joe. You have a smart one and a dummy. But I think he's a little more popular, I don't know why."

Bongino, a former Secret Service officer and Republican congressional candidate, was one of a number of supporters and legislators who were harassed by Black Lives Matter protesters outside the Republican National Convention in Washington D.C. this August.