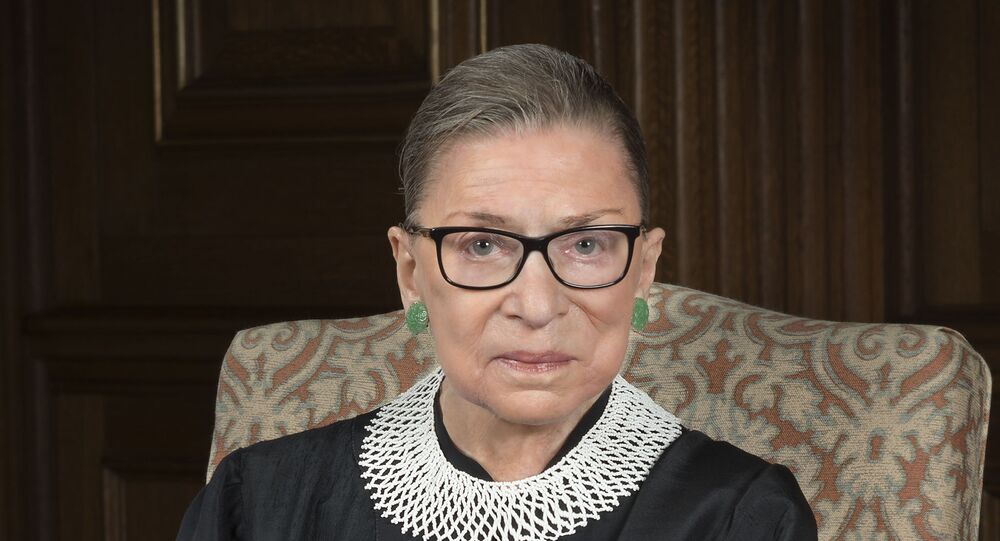 Associate Justice of the Supreme Court of the United States (SCOTUS) Ruth Bader Ginsburg, 87, has passed away from complications related to pancreatic cancer, SCOTUS announced Friday.

"My most fervent wish is that I will not be replaced until a new president is installed," Ginsburg, the second woman to serve on the Supreme Court, dictated to her granddaughter, Clara Spera, in the days leading up to her death.

Statement from the Supreme Court: pic.twitter.com/74d2k9POD5

The justice has repeatedly and publicly criticized US President Donald Trump, including one instance in which she apologized for calling the then-Republican presidential nominee an egotistical "faker" who refuses to release his tax returns.

"He has no consistency about him. He says whatever comes into his head at the moment. He really has an ego. ... How has he gotten away with not turning over his tax returns? The press seems to be very gentle with him on that," Ginsburg told reporters in July 2016.

Justice Ginsburg of the U.S. Supreme Court has embarrassed all by making very dumb political statements about me. Her mind is shot - resign!

After the then-candidate clapped back via social media, Ginsburg admitted her statements were "ill-advised" and that she did "regret making them."

After graduating with a Bachelor of Laws degree from Columbia Law School, the Brooklyn, New York, native devoted her youth to activism - specifically as it pertains to women's rights - and was a catalyst for the launching of the Women’s Rights Project of the American Civil Liberties Union (ACLU) in 1971.

Prior to her 1980 appointment as a judge in the Washington, DC, Court of Appeals, Ginsburg served as general counsel for the ACLU starting in 1973, as well as the organization's National Board of Directors beginning in 1974.

Ginsburg carried her foundational liberal ideology with her to the Supreme Court following her August 10, 1993, swearing-in ceremony.

Following news of Ginsburg's death, Senate Minority Leader Chuck Schumer (D-NY) took to Twitter and declared that the vacancy "should not be filled until we have a new president," despite Trump's possible reelection in November.

Trump shocked many Americans earlier this month when he released an updated list of potential SCOTUS nominees, including Sens. Tom Cotton (R-AK) and Ted Cruz (R-TX).

However, not everyone listed has expressed interest in filling the SCOTUS seat.

I appreciate the President’s confidence in listing me as a potential Supreme Court nominee. But as I told the President, Missourians elected me to fight for them in the Senate, and I have no interest in the high court. I look forward to confirming constitutional conservatives

Trump, who nominated SCOTUS Justices Neil Gorsuch and Brett Kavanaugh in 2017 and 2018, respectively, issued a warning alongside his list about a "growing radical left movement that rejects the principle of equal treatment under the law."

"Radical justices will erase the Second Amendment, silence political speech and require taxpayers to fund extremely late-term abortion," he said on September 9. "It will give unelected bureaucrats the power to destroy millions of American jobs. They will remove the words under God from the Pledge of Allegiance. They will unilaterally declare the death penalty unconstitutional, even for the most depraved mass murderers."

ABC News Senior Editorial Producer John Santucci reported that "multiple sources close to President Trump" have claimed the US president will announce a SCOTUS nominee to fill Ginsburg's seat in the coming days.

A third appointment by Trump would likely give conservatives a 6-3 majority in the Supreme Court.