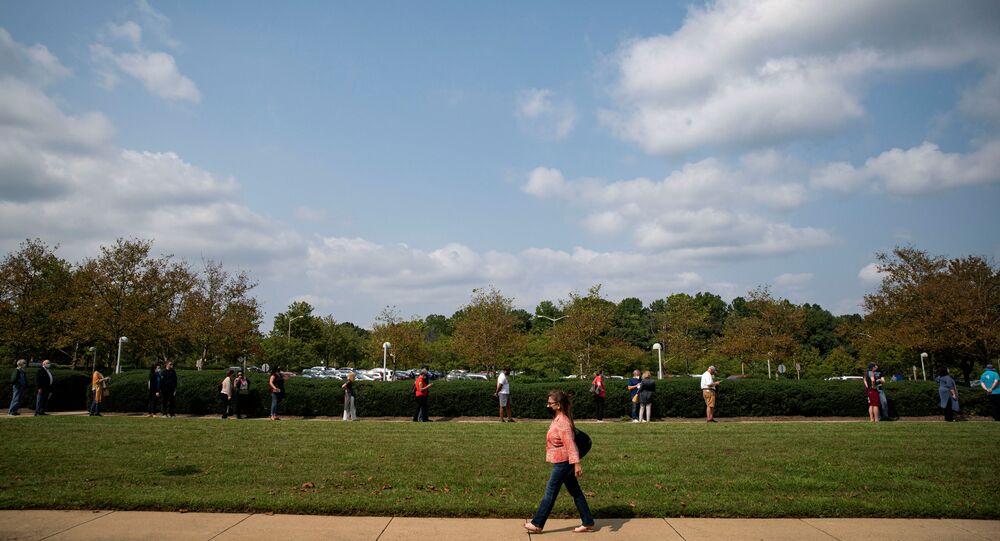 The in-person early voting kicked off in four US states on Friday, with Minnesota - a critical "battleground" state - also registering a high turnout, prior to the visits of presidential candidates Donald Trump and Joe Biden.

A large number of Virginians have lined up for in-person early voting across the state, ahead of the 3 November presidential election.

There may be 6+ weeks until Election Day 2020, but early voting in Virginia actually starts today — and there are dozens of voters in line to vote in person even before the building here in Richmond, VA opens pic.twitter.com/LchWhknggp

Some have suggested that people are voting in-person despite the pandemic because they do not trust mail-in ballots. Democrats have been promoting mail-in ballot voting as a safe means to avoid going out, while it has been criticised by President Trump, who said that such a system could lead to fraud in the election.

Look at that line for early IN-PERSON voting in Fairfax, Virginia today!

This is a sign that people don't trust the mail-in ballot system. pic.twitter.com/hshes7l870

People waiting for hours in Virginia to cast their ballots. Despite this massive line, no complaints here. Voters tell us they are excited, and not taking any chances. pic.twitter.com/44gwG9tE6v

As the election is looming, Trump addressed Americans in Virginia on Twitter, slamming Democratic Governor Ralph Northam for his "liberal agenda", including tough gun laws and support of abortion, and pledging instead to protect their rights under the Second Amendment.

Voting starts in Virginia TODAY, and we are going to WIN. You have a crazy Governor who wants to take away your guns, which he will do without me in office. He is in favor of executing babies after birth - this isn’t late-term abortion, this is a step way beyond! Vote for me...

In total, more than 35 other states will arrange in-person voting ranging from roughly five to 30 days ahead of 3 November.