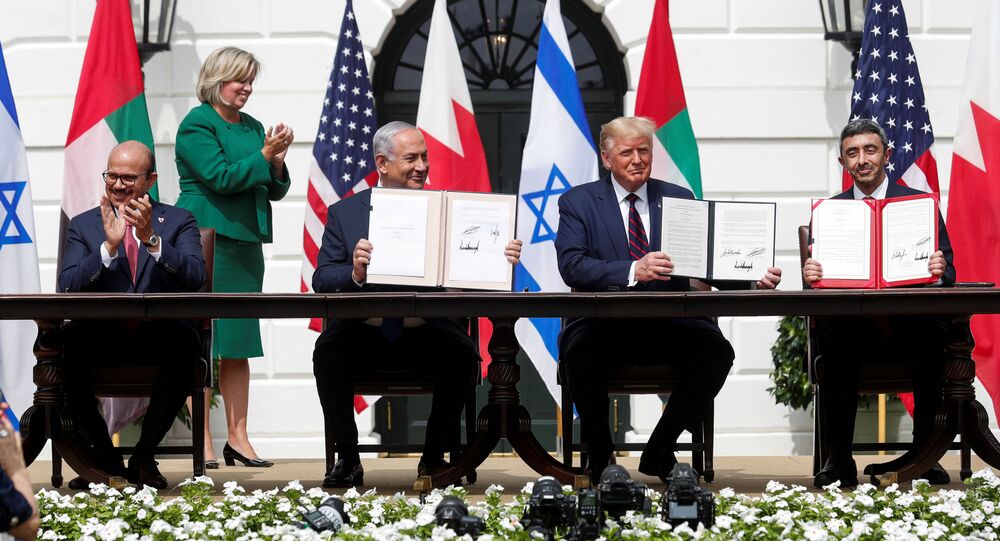 On 15 September, Israel concluded historic deals with the United Arab Emirates (UAE) and Bahrain paving the way for official diplomatic relations and normalised ties at the White House. Dr Jon Kofas, a professor of history, explains why the accords go beyond a mere normalisation pact and are targeting US rivals, China and Iran.

"Historic day for peace in the Middle East," tweeted Donald Trump, who was presiding over the signing ceremony for the Abraham Accords on Tuesday. "I am welcoming leaders from Israel, the United Arab Emirates, and the Kingdom of Bahrain to the White House to sign landmark deals that no one thought was possible. More countries to follow!"

Abraham Accords are more than a Regional Normalisation Pact

However, those on the left side of the US political spectrum rushed to downplay the significance of the agreement arguing that the Abraham Accords are not actually a "peace deal". "It is not a peace treaty because Israel has not been at war with either of the two Gulf Arab states", claimed American author and journalist Fred Kaplan in his comment piece for Slate magazine. NBC News’ chief foreign affairs correspondent Andrea Mitchell also insisted on air that the deal in question doesn't amount to "Middle East peace", a remark which cost her an interview with White House senior adviser Jared Kushner, who has long championed the reconciliation process.

Such a beautiful message of peace: The walls of the Old City in Jerusalem were lit tonight with the Israeli, American, Emirati and Bahraini flags.

This is the wind of change. pic.twitter.com/7gc10JO4XV

​While the war of words between Trump's supporters and opponents over the Abraham Accords continues to escalate, Dr Jon Kofas, a history professor at Indiana University, has drawn attention to the fact that the deal is more than just a regional agreement: it is aimed at accomplishing a whole set of US political goals.

"The US is using the Accords as a way to maintain its historic role to determine the regional balance of power, contain and isolate Iran while keeping China’s role limited, sell more weapons, and project a foreign policy victory to the American people right before the presidential election", the academic believes.

Trump's Strategy of Weakening of Iran

The Trump administration's withdrawal on 8 May 2018 from the Joint Comprehensive Plan of Action (JCPOA), also known as the Iran nuclear deal, has, Kofas said, marked the beginning of Washington's tougher containment strategy aimed at weakening Iran’s role in influencing the regional balance of power, especially in Yemen, Syria, Lebanon, Iraq, and Afghanistan, adding that the the Abraham Accords were the logical conclusion to this policy.

The Islamic Republic of Iran has resolutely condemned the Abraham Accords describing them as a "treacherous stab in the back", and a betrayal of Palestinian Arabs indicating a potential change of strategy in the region.

According to Kofas it is hardly a coincidence that after a UAE-Israeli agreement was announced in August, Iran’s Defence Minister Amir Hatami went to Russia to hold talks with his Russian counterpart Sergei Shoigu and other senior Russian officials and take part in the International Military-Technical Forum "Army-2020".

"Russia’s concern that the Abraham Accords could signal an end to UAE as a peace broker between Iran and Saudi Arabia has forced Moscow to consider strengthening ties with Tehran", the professor suggests.

Commenting on Hatami's August tour, Iran’s Ambassador to Russia Kazem Jalali said that military cooperation between Tehran and Moscow is going to "reach new levels", as cited by Tasnim News.

Earlier in summer, The New York Times unveiled a Persian-language draft deal envisaging a 25-year strategic partnership between Iran and China which prompted a heated debate in the international media. Though admitting that Tehran and Beijing has been considering an enhanced cooperation deal for quite a while, the Iranian authorities have not confirmed the authenticity of the document so far.

US Seeking to Limit China's Influence in Middle East

From a broader perspective, the US-backed Middle Eastern deal is aimed at solving Washington's long-term plan of preserving "Pax Americana" and boosting the US influence in the region where China is concerned.

"Given that Iran has forged much closer ties with China and Russia, US containment strategy embedded in the Abraham Accords follows the long-standing US policy of relegating the Middle East as its historic zone of influence ever since the Truman Doctrine (1947) that created the 'Northern Tier' as a buffer zone against the Soviet Union", the academic suggests.

However, presently, the ‘northern tier’-style policy is mostly targeting the People's Republic, since "China’s economic and geopolitical expansion is what the US fears more than any other power in the world, including Russia", the professor says.

According to him, China is aware of Washington's grand design and understands that the Abraham Accords could facilitate the containment of China in the region, as the US may now put pressure on its allies in the Gulf to reconsider their approach to the Beijing-led Belt and Road Initiative.

Though Beijing has largely welcomed the peace initiative, some Chinese scholars raise concerns over how the agreement affect the Middle East and the Palestinian issue in particular. The US-based Middle East Institute cited Shanghai International Studies University’s Liu Zhongmin who believes that the Abraham Accords could increase divisions among Arab states and further radicalise Hamas. Li Shaoxian, the dean of the Chinese Academy of Arab Studies at Ningxia University, shares this view.

Militarisation of the Middle East

The US goal is in effect continued militarisation as leverage to maximise the influence regional US allies have coalescing around Israel and Saudi Arabia, Kofas says.

Thus, finalising a pending US-UAE arms deal could be one of the Abraham Accords' byproducts, according to the professor.

In August, the US announced the sale of F-35 fighter jets, Reaper Drones, and EA-18G Growler jets, designed for stealth attacks by jamming enemy air defences, to Abu-Dhabi. Although Israeli Prime Minister Benjamin Netanyahu initially opposed the deal, the UAE officials have recently expressed hope that after the signing of the peace treaty with Israel, the obstacles to the arms deal would be removed.

Suggesting that Washington will proceed with offering weapons sales as incentives to other Arab states to join the Abraham Accords, Kofas warns that it may result in a new arms race in the Middle East "much to the delight of [US] weapons manufacturers, but to the detriment of the people in those countries".

Besides this, the accords threaten to bring the Palestinian issue to nothing, as Arab states "see benefits to such realignment and nothing to gain by ideologically backing the Palestinians whose global leverage is currently at its lowest level in history", according to Kofas.

Previously, the establishment of an independent Palestinian state was named by Arab and Muslim nations as a prerequisite for normalisation with a Jewish state. Foreseeing that Sudan, Morocco and even Oman, which has long maintained close ties with Iran, may soon follow Abu Dhabi and Manama's example, the professor notes that other nations closely allied with the US and Saudi Arabia are likely to normalise relations with Israel, overlooking the Palestinian matter.

The unfolding big power game in the Middle East is still unlikely to boost Donald Trump's election odds this November, according to Kofas.

"Coinciding with the pre-election season, the Abraham Accords will not have any impact on American voters, for they do not cast a ballot on the basis of foreign policy deals", Kofas says, adding that voters will be just as unmoved by Trump’s Nobel Peace Prize nomination.

Nevertheless, Trump's possible defeat does not mean that Washington would substantially reverse its Middle Eastern strategy aimed at militarisation of the region under Democratic presidential nominee Joe Biden, the professor believes.

"Domestically, not just Trump’s supporters, but even establishment Democrats backing Biden, have no objection to the US selling more weapons to Middle East allies, while forging new coalitions. This regardless of the objections that some Democrats make about lack of consultation that is typical of the Trump administration across the board", he concludes.

$400 Billion Deal Between Iran-China Does Not Impact Our Ties with Tehran: Indian Foreign Minister