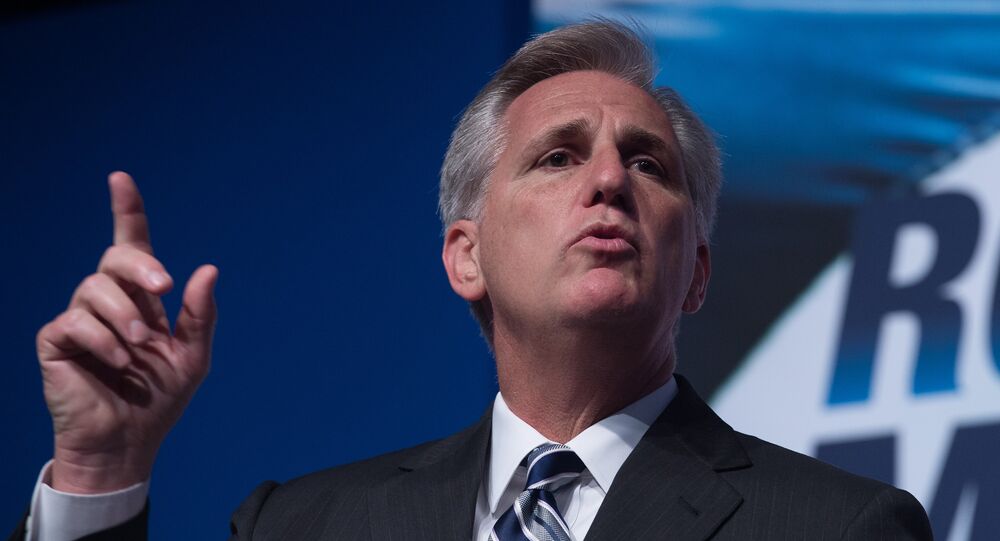 Republicans Make Pitch to Win Back House Majority in November

The Republicans' 'Commitment to America' manifesto unveiled on Tuesday includes renewed pledges to support law enforcement officials and restore law and order after months of deadly rioting across the country.

Republican House members have laid out their plan for the US if they win back a majority from the Democrats.

Gathered on the steps of the Capitol building, the Republican caucus unveiled their Commitment to America manifesto to voters in the November 3 presidential and House elections.

"This is our commitment to you - to every single American regardless of party, gender, or skin color: We will restore your way of life," House minority leader Kevin McCarthy said. "We will rebuild the greatest economy. And we will renew the American dream. Join us and let's reunite this nation."

The three slogans of the plan are “Restore Our Way of Life,” “Rebuild the Greatest Economy in History,” and “Renew the American Dream.”

Republican pledges included reiterated support for police officers and the restoration of law and order following months of rioting amid anger over police brutality.

"The war on police must end," Minnesota Representative Pete Stauber said. "The terrorizing and elimination of law enforcement must stop. Law and order will be restored in our communities."

The Republicans lost control of the House of Representatives to the Democrats in the 2018 mid-term elections, but still have a majority in the Senate.

In an article for the Fox News website, McCarthy addressed the coronavirus pandemic, writing: "We must and we will defeat COVID-19 and keep America healthy."

He said Republicans would triple the rate of testing for the virus, deliver a safe and effective vaccine and lower the price of other treatments.

McCarthy pledged $200 billion in "forgivable" loans to small businesses via the Paycheck Protection Program as part of a promise to create 10 million new jobs. Those loans have been opposed by Democrats in the four-month Congressional deadlock over a second stimulus package.

And he said the second term for President Donald Trump would see more investment in neglected communities through Opportunity Zone credits, which the Republican leader claims will "generate $10 billion in economic growth each year."