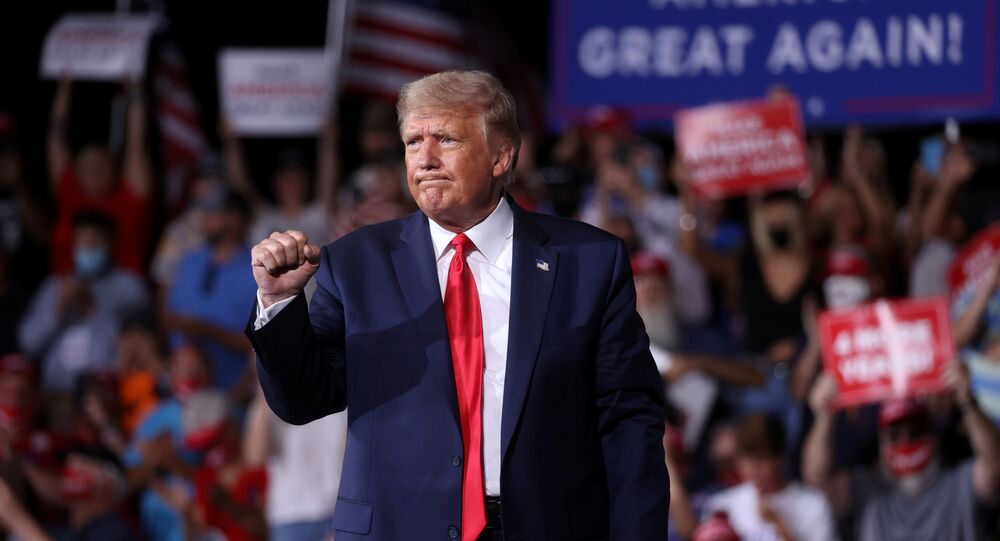 Swing-state North Carolina backed the winner in four of the last five general elections, including Trump in 2016, Democrat Barack Obama in 2008 and George W Bush in 2000 and 2004. With 15 electoral college votes it is an important prize for candidates.

US President Donald Trump is narrowly leading Democrat rival Joe Biden in the swing state of North Carolina, according to a new poll.

The Trafalgar Group poll gave Trump 47.8 per cent support, compared to 46.1 per cent for Biden - a difference of 1.7 per cent, smaller than the pollsters' 2.95 per cent margin of error.

​Libertarian Party candidate Jo Jorgensen was on 1.6 per cent support, with the Green Party's Howie Hawkins and Constitution Party's Don Blankenship both with half a per cent. The poll surveyed 1,046 respondents between September 9 and 11.

© AFP 2021 / SAUL LOEB
New Poll Shows Donald Trump, Joe Biden Deadlocked in Battleground State as 2020 Race Tightens
With 15 electoral college votes in the election, North Carolina is an important swing state. It backed the winner in four of the last five general elections, voting for Trump in 2016, Democrat Barack Obama in 2008 and George W Bush in 2000 and 2004. Republican Mitt Romney won the state in 2012, but lost overall to Obama.

Only the states of Maine and Nebraska split their electors between the candidates, on the basis of who wins the popular vote in each congressional district - two for Democrat stronghold Maine and three for Republican hinterland Nebraska.

Four elections in US history have seen the candidate who wins more votes overall lose out in the electoral college, including Bush's election in 2000 and Trump's 2016 win.

Just 15 of the 50 US states are considered swing or battleground territories in presidential elections.