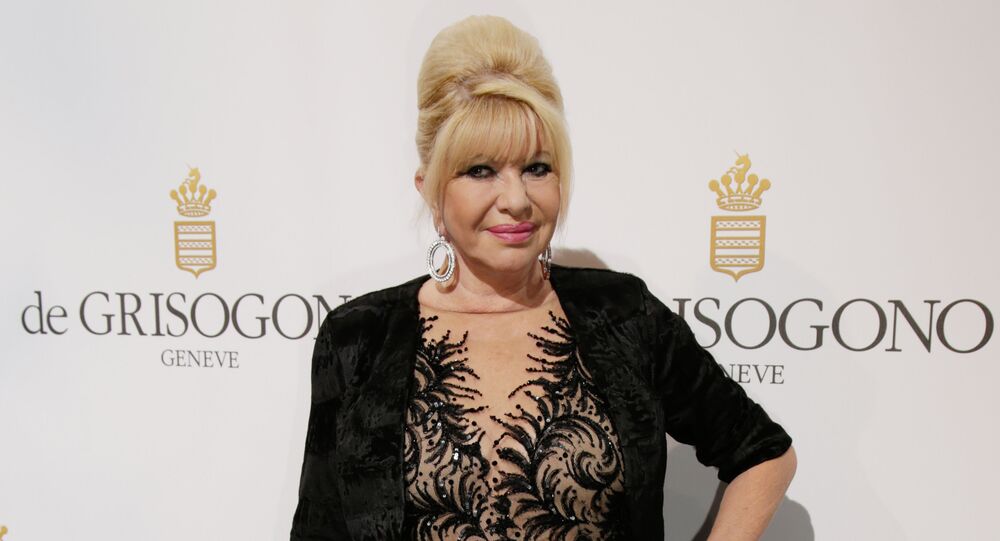 Ivana, mother of Donald Jr., Ivanka and Eric Trump, who the US president was married to for 15 years, has admitted that her relationship with her ex-husband changed drastically two years after their 1991 divorce.

Donald Trump’s former wife Ivana, who had three of the president's five children, has revealed that she can call her ex-husband, now a good friend of hers, any time she wants, despite him being the leader of the country.

In a Monday TV interview on the British talk show “Loose Women”, Ivana, who married the former businessman in 1977 and divorced him almost 15 years later, not only opened up on how they get along, but  also shared her views on his current wife, 50-year-old Melania, mother of Trump’s youngest son Barron.

She candidly recounted how they became pals after their divorce, aiming to keep up good relationship for the sake of their brood.

“It took about two years until our prenuptial agreement was finalised and we split whatever we had to split and then we talked about the kids - we had three wonderful kids to raise,”  Ivana said, adding that Eric was just 4 at the time, “Ivanka was probably 6 and Donald Jr was 12, something like that.” She explained that at that hard point in time, they needed people around to look after and guide them. “After all that was solved we became very good friends,” she said.

When asked if she was on friendly terms with FLOTUS Melania or ever speaks to her, Ivana responded:

“No, I speak directly to Mr. President… We talk about our children, sometimes we talk about economics but I don’t give him really advice.”

Ivana admitted she had certainly met Melania in person, but doesn’t think anything particular of  her, saying “she’s very quiet and she really doesn’t go to too many places.”

71-year-old Ivana shared that Melania “goes to stuff” when she is obliged to.

The White House didn’t immediately respond to media requests for comments on the remarks.

Back in 2017, Ivana told "Good Morning America" in an interview that she preferred not to try to reach out to the president at the White House “because Melania was there”.

“And I don't want to cause any kind of jealousy or something like that because I'm basically first Trump wife," Ivana Trump said at the time, while promoting her book on how she raised her three children with the president. Melania Trump's spokeswoman Stephanie Grisham said in a statement then that Melania is in no way willing to use her title to sell books, but rather help children, as part of her children’s well-being project Be Best, which was launched a year later. Speaking about the ex-wife’s rhetoric, Grisham said:

“There is clearly no substance to this statement from an ex. Unfortunately only attention seeking and self-serving noise."

After she split up with the then-New York real estate developer, Ivana was given a $14 million settlement, a 45-room mansion, an apartment in Trump Tower and was permitted to use the family’s landmark Mar-a-Lago resort for a month every year. Ivana reportedly signed a non-disclosure agreement banning her from talking about her union with Trump.