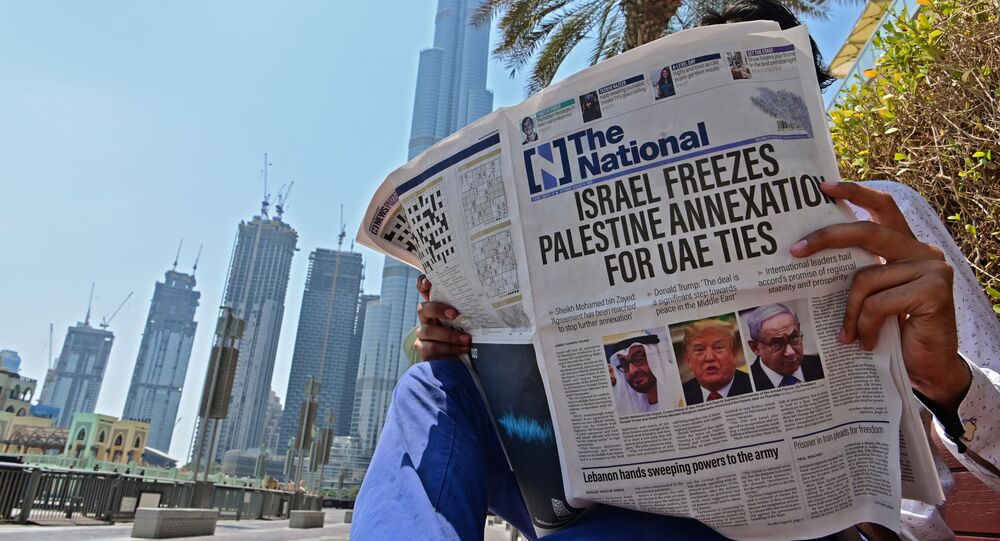 The soon-to-be-released book is based on 17 interviews with President Trump, focusing on his foreign and domestic policies, including the response to the raging pandemic, and is scheduled to see the light of day on Tuesday. Trump has already blasted the work as “a fake, just as many of the others have been”.

Donald Trump asked Washington Post journalist Bob Woodward, whose book titled "Rage" is soon to be released, to include the deal between Israel and the United Arab Emirates in it, the author shared on Sunday night. But when the president was told that was not possible, Trump is claimed to have tweeted that the book was “gonna be fake”.

The deal in question is a historic Washington-brokered agreement whereby Israel “suspends” its plans to extend sovereignty over parts of the West Bank.

© CC BY 2.0 / Adam Baker / Nobel Prize Medal
Does Trump Deserve a Nobel Peace Prize Over UAE-Israel Deal & Will He Get the Award?

Woodward’s book is based on 17 on-the-record conversations with the president and even ahead of its publication on Tuesday, it has fuelled significant controversy, dwelling, among other things, on Trump’s confession that he had played down the danger from the coronavirus. The latter has been chewed over by the Democrats, seeking to reduce Trump’s chances of re-election in November.

In an interview with CBS' 60 Minutes, Woodward said he spoke to Trump on 14 August.

“It’s a tough book”, Woodward recalled telling POTUS, alerting him to the fact that there are going to be “things that you are not gonna like, judgments that I made”.

“Well, I didn’t get you on this book. Maybe I’ll get you on the next one”, the president said, according to the author.

“An hour and a half later”, Woodward went on, “he tweeted out that the Bob Woodward book is gonna be fake”.

...The Bob Woodward book will be a FAKE, as always, just as many of the others have been. But, believe it or not, lately I’ve been getting lots of GREAT books!

Woodward, who rose to prominence in the 1970s while reporting on the Watergate scandal that saw Richard Nixon resign, continued to publicise, while speaking to NBC’s Today on Monday, excerpts from his book based on tapes of POTUS admitting to underestimating the coronavirus threat. While introducing the coronavirus measures in March, POTUS repeatedly stressed that the lockdown may not be any less harmful for US citizens’ wellbeing than the pandemic itself.

With regard to foreign policy, NBC played a hitherto unheard tape of the president discussing his relationship with other world leaders.

“I get on very well with Erdogan”, Trump said, referring to the Turkish president.

“Everyone says ‘what a horrible guy’ but for me it works out. It’s funny, the relationships I have, the tougher and meaner they are, the better I get along with them. Explain that to me someday, OK, but maybe it’s not a bad thing”, Trump reportedly recounted, adding that “the easy ones are maybe the ones I don’t like as much or don’t get along with as much”.

Speaking about Trump having the upper hand in foreign policy, Woodward went on to say that “the president just controls foreign relations unilaterally”.