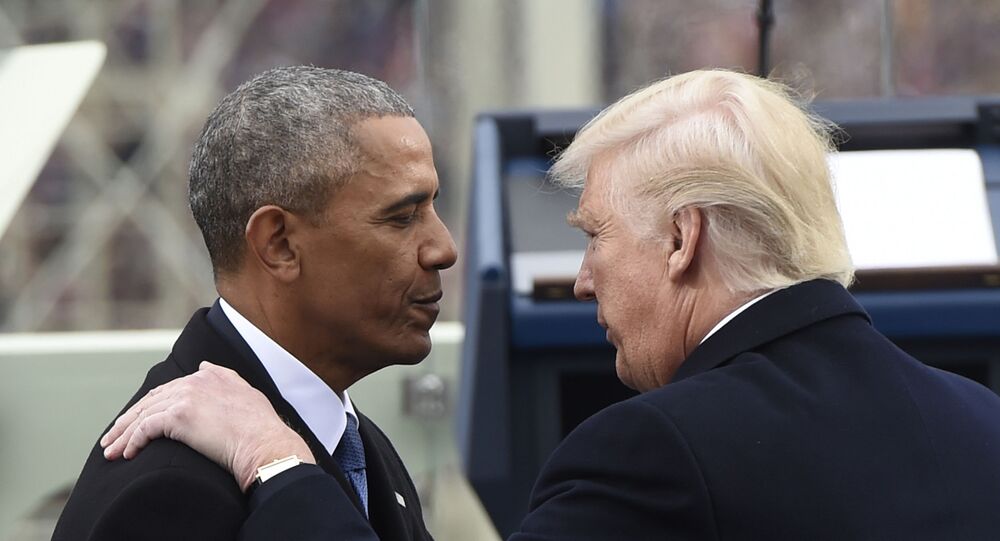 In late March, POTUS claimed that the Obama administration’s senior officials were likely behind the special counsel’s almost two-year probe, which concluded in 2019 that there was no collusion between Russia and Donald Trump ahead of the 2016 US election.

During a rally in Henderson, Nevada on Sunday night, crowd started chanting "lock him up" after the US president accused his predecessor Barack Obama of spying on the 2016 Trump campaign.

POTUS told his supporters that “by the way”, Obama “got caught spying on my campaign”, in an apparent nod to Trump’s and his allies’ previous  accusations that the probe into the Trump campaign’s alleged contacts with Russia in 2016 was orchestrated by the Obama administration in an attempt to torpedo is candidacy.

And there it is - The new chant for Obama #LockHimUp pic.twitter.com/E98TeAqOkX

“He got caught. We caught him cold, now let’s see what happens,” Trump said as many attendees began to chant "lock him up!", mimicking the "lock her up" rally cry that POTUS encouraged during his 2016 election race against Democratic challenger and former secretary of state Hillary Clinton.

Despite the fact that the use of a private server prevents her emails, including those that could be related to the 2012 Benghazi attack, from being available via FOIA [Freedom of Information Act], the FBI advised against opening a criminal case against Clinton, merely describing her actions as "extremely careless".

© REUTERS / Carlos Barria
'It's a Treason': Trump Slams Obama Administration Over Flynn After DOJ Drops Charges
Trump’s new accusations against his predecessor came after the US president suggested in late March that the Obama administration’s high-ranking officials could be behind Special Counsel Robert Mueller’s investigation into alleged Russian election meddling.

Asked if he believed that those officials had plotted what he described as “treasonous” conspiracy to derail his presidency, Trump said, “I don’t want to say that, but I think you know the answer”.

“I think it went higher up. We can’t let it happen again. It went very high up and it started fairly low, but with instructions from the high up. This should never happen to a president again,” he argued during a lunch with GOP members at the Capitol.

In April 2019, a report by Special Counsel Robert Muller revealed that there had been no collusion between Trump campaign officials and Moscow during the 2016 US election campaign. Russia, in turn, has repeatedly denied allegations of meddling in the American political system, while Trump rejected the collusion claims as a hoax and a political witch-hunt to reverse the results of the 2016 election.