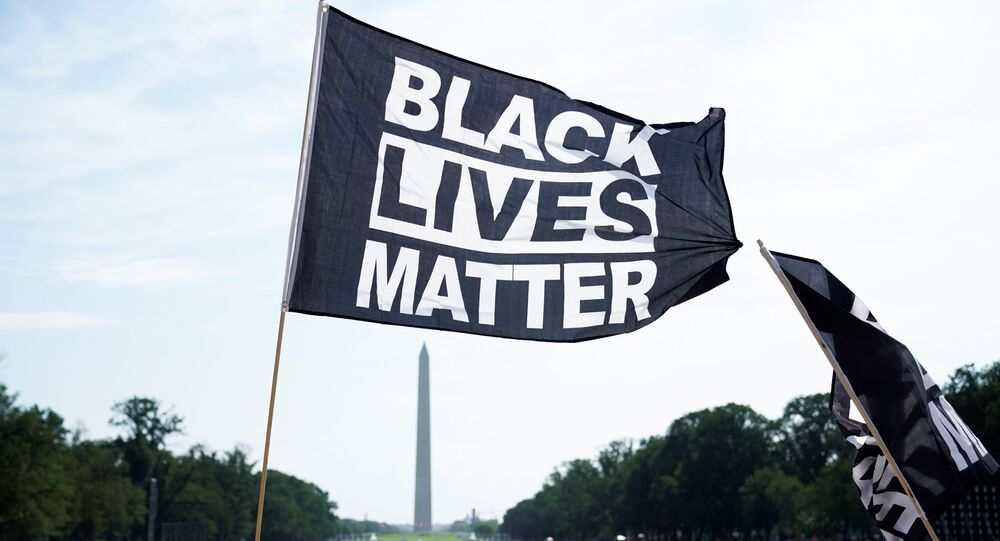 In recent months, the United States have seen significant developments in racial and social justice, in the wake of multiple incidents of police brutality against Black Americans involving white police officers, primarily encapsulated in the killing of Minneapolis resident George Floyd, a black man, who was asphyxiated by a white officer in May.

A Westchester County, New York, high-school teacher is in hot water after handing out to school kids cartoons that allegedly compare US police to slave owners and the Ku Klux Klan (KKK), a white supremacist hate group in the United States, the New York Post reported on Sunday.

The teacher, Christoper Moreno of Westchester’s Westlake High School, was said to have given students on their first day a five-frame cartoon panel with images related to the Black Lives Matter (BLM) movement. BLM was created in part as a response to  the killing of George Floyd, a black man, in May at the hands of white police officers.

In its first three frames, the cartoon panel depicts slave owners, along with a KKK member, kneeling on the backs of African-American men in shackles, with the KKK member holding a noose around a black man’s neck. The last two frames feature a sheriff and a police officer kneeling on the necks of handcuffed black men, an image resembling how Floyd was murdered. The last two frames were also captioned with a phrase pronounced by Floyd before he died: “I can’t breathe”.

“My daughter showed me the paper. I said, `What is this?! You’ve got to be kidding me!’” said Ania Paternostro, a Westlake HS student mom, according to the NYP. “This cartoon compares the police to the KKK. It’s an attack on the police.”

Paternostro told the newspaper that she “immediately” issued a letter to the office of the Mount Pleasant School district superintendent, Kurt Kotes, as well as to the school’s administration, in protest of what she characterized as a “brainwashing” of her children.

“Enough is enough,” Paternostro said. “This cartoon is disturbing. We have to respect the men in blue who protect us,” stated the US immigrant mom of two, a native of Poland. We don’t need a teacher brainwashing my kids. I’ll teach my kids about what’s right and what’s wrong.”

Paternostro’s daughter, Nicole, said that the teacher’s lesson plan was “disgusting”, and added that Moreno had offered a one-sided point of view.

“The cartoon was disgusting,’’ the school student reportedly told the newspaper. “It compared the police with all the terrible people in history. It was not fair. It wasn’t right.”

The teen complained that she was criticized on social media as being racist, after sharing Moreno’s history class plan, titled ‘European Colonization of America: Origins of American Society, Conflict, Power’.

In a letter to the parents of Westlake HS students, Kotes promised an investigation into the matter, according to the NYP.

“I have been advised that one of our High School teachers may have recently conducted a lesson that many have deemed to be highly controversial in the current climate,” Kotes reportedly said in his letter. “I want to assure the community that the District will be conducting a thorough investigation to determine what exactly occurred in this particular classroom and what, if any, action is to be taken under the circumstances to appropriately address the matter”.

Moreno has not yet commented on the matter, according to the newspaper.

According to the paper, the same cartoon was featured in an online assignment sent to students of the Wylie Independent School District in Texas. Texas state Governor Gregg Abbott called for the teacher responsible for the assignment to be fired.