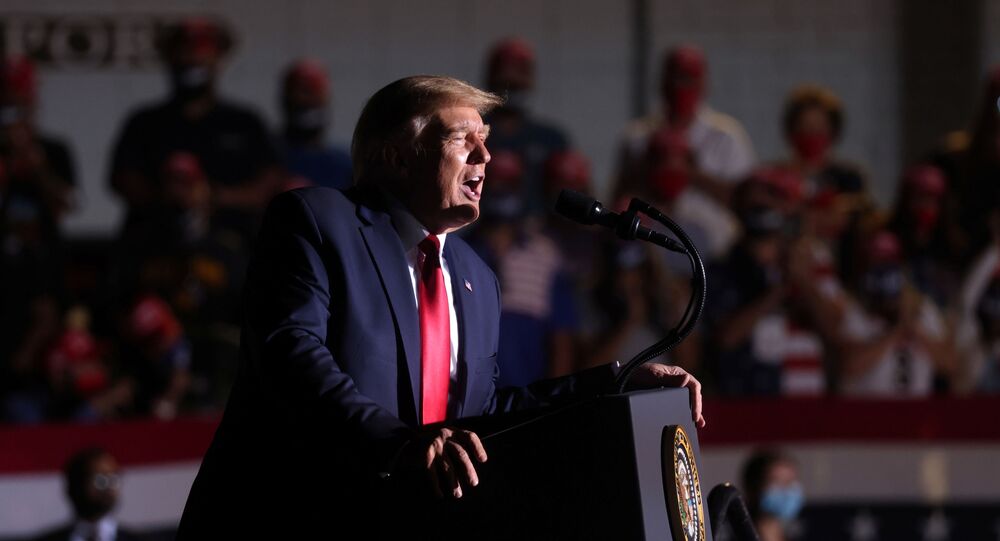 Trump repeatedly blasted numerous investigations into his election campaign and subsequent actions as the US president, calling them "witch hunts" that prevent him from running the country properly.

US President Donald Trump started his rally in Minden, Nevada on 12 September with a bizarre suggestion that he might run for the third term after winning in November 2020. POTUS suggested that he might have such a right, despite the US Constitution explicitly ruling it out, due to him having been haunted by probes of all kinds throughout the first term, none of which succeeded in proving that Trump had engaged in any illegal activities.

"We are going to win four more years in the White House. And then after that, we will negotiate, right? Based on the way we were treated we're probably entitled to another four after that. And it should never happen to another president," Trump stated.

It is unclear how serious the POTUS was about his ambitions for a third term, considering the fact that he has more than once blasted Democrats for initiating numerous probes into unsubstantiated allegations of connections between him, his campaign and Russia, as well as into his purported obstruction of justice. Trump called these investigations, including the notorious Mueller probe, which found no proof of Trump's alleged collusion with Russia, "witch hunts" and "presidential harassment" over them purportedly crippling his ability to rule the country.

"We're gonna win four more years in the White House, and then we'll negotiate, because based on the way we were treated, we're probably entitled to another four years after that" -- Trump, slurring, began his rally in Nevada by teasing that he intends to serve more than two terms pic.twitter.com/dgPjimP7Rv

Regardless of his intentions, Trump would be required to change the constitution in order to run for a third term, as currently, the 22nd Amendment prohibits a person from running for more than two terms, total. The only way an individual can serve more than 8 years as the US president is by filling in for the position in the event that another president is forced to step down early.

© REUTERS / Jonathan Ernst
'Now I Can Be Really Vicious': Trump Steps Up Criticism of Biden, Democrats, Media at Nevada Rally

The non-formal tradition for the two-terms limit was established by the first US President George Washington, but was violated by Franklin D. Roosevelt, who held the office for a total of four terms. Following this exception, the unwritten rule was formalised in the form of the 22nd Amendment out of fears another president might repeat FDR's feat in the future.