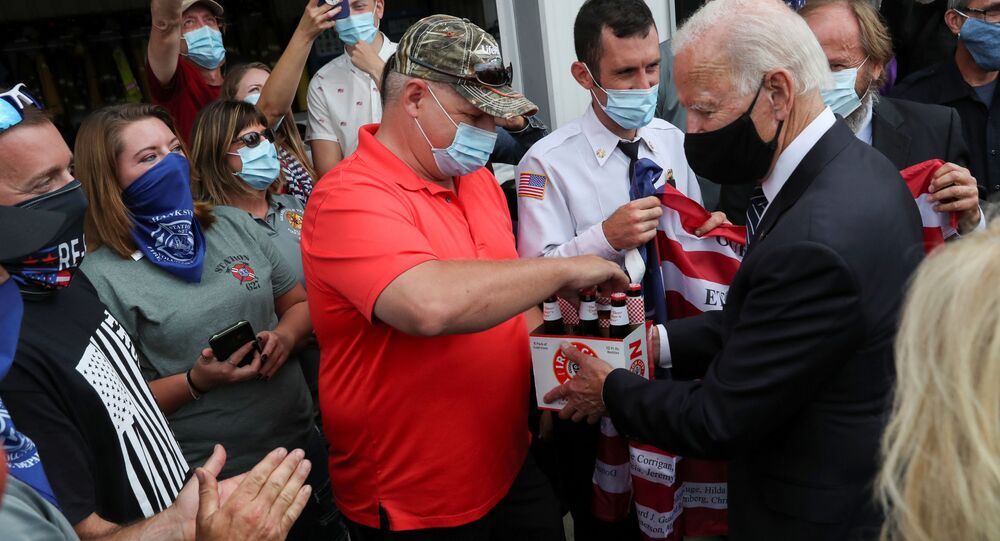 On Friday, Democratic presidential nominee and former US vice president, Joe Biden, along with his wife Jill, paid a visit to the Flight 93 National Memorial in Pennsylvania, as the country commemorates the 19th anniversary of the 11 September 2001 terrorist attacks against the United States.

Democratic presidential nominee Joe Biden on Friday surprised firefighters at the Shanksville Volunteer Fire Co. Station 627, in the US state of Pennsylvania, delivering two six-packs of beer, a promise he made to the workers during a 2012 visit to the facility.

The former vice president, on the campaign trail, showed up at the Shanksville fire station following his visit, along with his spouse Jill Biden, to the Flight 93 Memorial in Shanksville, Pennsylvania, on Friday to mark the 19th anniversary of the 11 September 2001 terrorist attacks against the United States, in which almost 3,000 people lost their lives.

Biden made a visit to Shankesville Volunteer Fire Co. Station 627. A man said he heard Biden was bringing beer, something he’d promised at one point. Biden went back to his SUV & retrieved six packs of Bud Light & Iron City Beer. "I keep my promises!” Biden said. (h/t @ccadelago) pic.twitter.com/ETSdDDgDM2

During Biden’s visit to the fire station, one of the firefighters reminded the Democratic nominee of a promise he made many years ago to bring beer the next time he comes to town. Biden immediately went back to his vehicle and brought out the promised gift, along with a Bundt cake and pastries.

#Biden in Shanksville, PA today, where he had promised to bring firefighters beer the last time he was at the station. One of them reminds him, and Biden busts out some Iron City.

“I keep my promises!” Biden told the firefighters.

The incident was met with various reaction on social media, with Twitter users suggesting the US “is literally craving empathy and kindness from a leader” now a days.

“Isn't it amazing how such a small act moves us these days?” the user questioned. “Our country is literally craving empathy and kindness from a leader.”

Isn't it amazing how such a small act moves us these days? Our country is literally craving empathy and kindness from a leader. 🇺🇸

Another user suggested that the former vice president is “just the best man for this moment”, adding that he’s now “proud” of voting for Biden during the Democratic primaries before he was nominated in mid-August.

I voted for joe in the primary, he wasn’t my first choice. But damn I’m proud of that vote daily now. He’s just the best man for this moment and Kamala is fantastic.

Amazing that such a small, decent act makes me cry. So shines a good deed in a naughty world. Thank you, Joe.

Some users imagined what Biden’s opponent, US President Donald Trump, would have done in the same scenario.

WHAT a stark difference between him & Trump.
The level of hate Trump gas amplified in just 4 yrs is disgraceful & so sad

Makes me wonder how in the hell Trump supporters can think that Donnie is a man of the people. Not only would he not drink a beer with them, he would have them thrown out of his hotel for being common.

Some users characterized Biden’s deed as “just another example of the phony Biden campaign”. And another person criticized Biden for “serving something that requires people to take OFF their masks” amid the ongoing coronavirus (COVID-19) pandemic.

A six pack? Hahaha! Just another example of the phony Biden campaign. They do things for show like "acknowledging" ethnic holidays Biden has never even heard of. He personifies pandering.

He's serving something that requires people to take OFF their masks to consume?

Why not just set up a kissing booth?