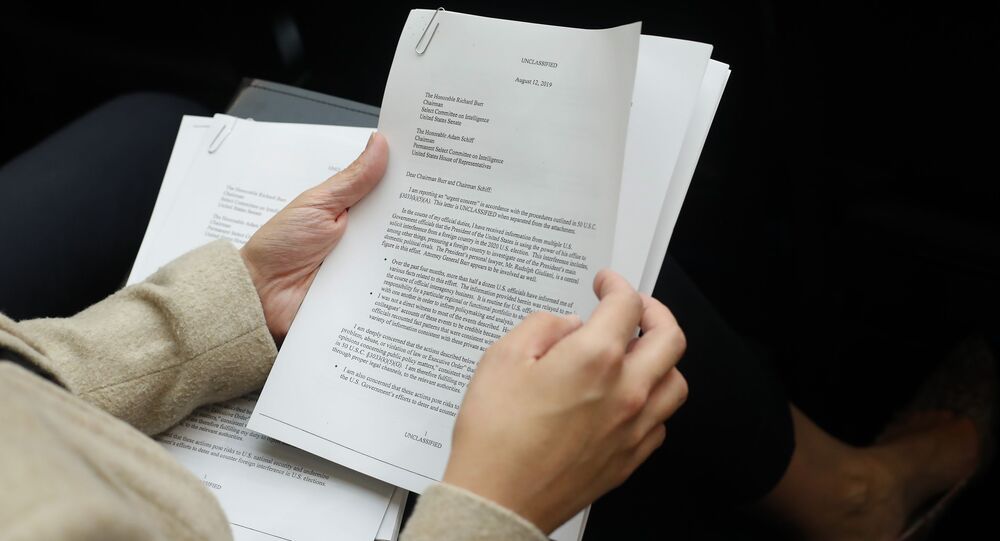 WASHINGTON (Sputnik) - The US Senate Intelligence Committee on Friday sent a letter to the Department of Homeland Security (DHS) requesting that it submits all intelligence assessments related to a whistleblower’s complaint that the Trump administration allegedly mishandled data.

Earlier this week, former Acting DHS Under Secretary for Intelligence and Analysis Brian Murphy accused White House officials of manipulating, censoring and politicizing the department's intelligence, including on Russia’s alleged interference in US elections, so that it supported the Trump administration's claims.

"As the Committee investigates this matter, we respectfully request that you provide the Committee with all intelligence assessments produced by I&A [Office of Intelligence and Analysis] related to Mr. Murphy’s complaint including but not limited to products related to migration and asylum, foreign interference in US elections, and domestic threats related to white supremacism, Antifa and ‘anarchist groups,’" Acting Committee Chairman Marco Rubio and Vice Chairman Mark Warner said in the letter.

The senators also asked the DHS to provide by September 18 source notes, a compilation of underlying intelligence and a comprehensive accounting of how the assessments were produced.

Murphy alleged in the complaint - submitted to the DHS Inspector General this week - that White House and DHS officials had asked him on various occasions to manipulate intelligence in support of the Trump administration's various claims such as that terrorists were a threat on the southern US border and that the far-Left Antifa movement and other anarchists were domestic terrorists.

Murphy also claimed that senior Trump administration officials suppressed intelligence reports about alleged Russian interference in the 2016 US election and sought to highlight data on meddling by China and Iran.

US House Intelligence Committee Chairman Adam Schiff sent a letter to Murphy earlier asking him to appear before the panel for a deposition on 21 September.