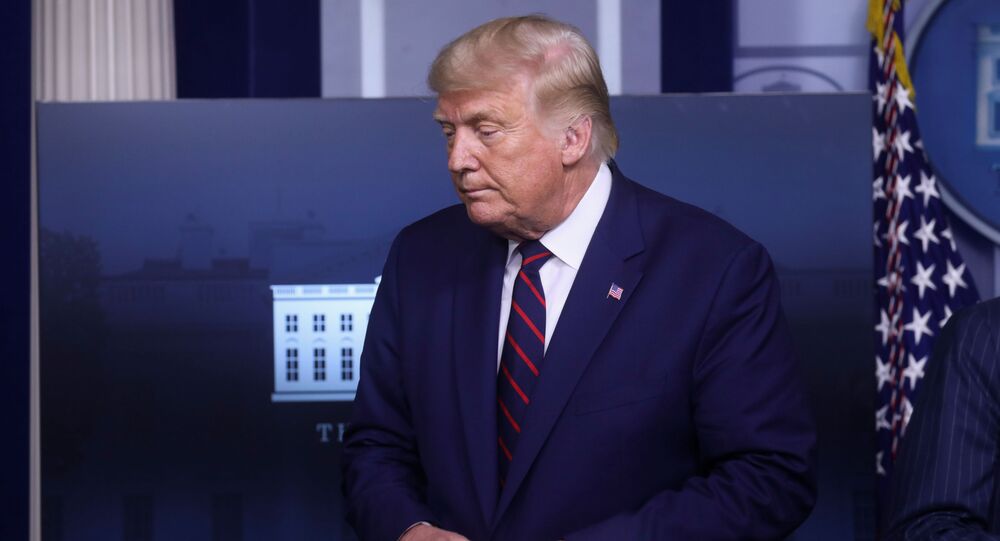 Donald Trump has doubled down on the decoupling of the US and Chinese economies in his recent speech at the White House, calling upon American firms to bring jobs back home or face punitive tariffs. US observers have weighed in on whether Trump's demands and threats are realistic.

On Monday, President Donald Trump vowed to slap big taxes on American companies which create jobs overseas and prohibit those who outsource production to China from getting US federal contracts.

"We'll manufacture our critical manufacturing supplies in the US, we'll create 'made in America' tax credits and bring our jobs back to the US and we'll impose tariffs on companies that desert America to create jobs in China and other countries," Trump summarised at a White House conference on 7 September, pledging to bring an end to the US' reliance on the People's Republic.

Trump's Proposals are Constitutional & Consistent With His Strategy

It is not the first time that Trump has threatened to decouple the US  economy from China: since 2018, Washington has repeatedly slapped punitive tariffs on Chinese goods, cracked down on the Chinese telecom giant Huawei and put the Sino-American trade negotiations on hold over Beijing's allegedly flawed handling of the coronavirus pandemic.

However, the US and Chinese economies still remain intertwined, with dozens of American companies, including Apple, Boeing, Caterpillar, Ford, and General Motors having a strong presence in the People's Republic. One might ask whether the Trump administration is able to 'walk the walk' and ban major US corporations from getting federal contracts.

"The president has broad powers over foreign affairs under Article II and with authorisation from Congress," explains Robert Sedler, a distinguished professor of law at Wayne State University in Michigan.  "He also has the power to regulate federal contracting. This action may be challenged, but the courts are likely to hold that the President had the power to take this action."

President Trump enjoys broad discretion in areas of foreign commerce, as every American president has enjoyed since the founding of the United States, observes Robert Barns, a constitutional and civil trial lawyer.

He highlights that Trump's proposals are "constitutional", and "consistent to his promises to the American people to protect American jobs and wages from unfair foreign competition".

Bringing Back Jobs May be Opposed by US Industrial Giants

While it appears easy on paper, in reality the re-allocation of industries back to the US would take time and effort and is likely to be opposed by some US industrial giants, presumes Mitchell Feierstein, a hedge-fund manager and CEO of the Glacier Environmental Fund Limited.

"Not very easily implemented, but Trump may orchestrate a re-allocation of industrial contracts deemed 'sensitive, critical, or that involve trade secrets' when strategic or national security interests are seen as being placed at risk," he opines.

Trump's statement came on the heels of the Pentagon's announcement that it is considering adding Semiconductor Manufacturing International Corporation (SMIC), China’s largest manufacturer of chips, to the Commerce Department’s Entity List, thus restricting it from receiving specific goods produced in the US. The Wall Street Journal broke last month that SMIC allegedly has ties to the Chinese military, something that the firm has vehemently denied.

To date, over 300 China-based companies have been added to the entity list, including the country's telecom flagship Huawei. The Federal Acquisition Regulatory Council's interim rule became effective on 13 August prohibiting new contracts, task orders or the modification of existing contracts to "entities" which are using telecom equipment produced by Huawei or ZTE, and video surveillance equipment manufactured by Hytera, Hikvision, or Dahua, as well as their subsidiaries or affiliates. The restriction largely applies to the US government's primary contractors, whether domestic or international.

"Repatriation of monetary assets, tax cuts, and moving jobs back into the US while returning the control of supply chains to the US under the lens of national security will be seen as net positive for the America First campaign," notes Feierstein.

However, "the oligarchs of Silicon Valley running America's technology companies loath Trump and will do anything to ensure Trump's second term never happens," he suggests.

The Nikkei Asian Review reported in July 2019 that about 50 US companies were supposedly mulling over a partial or complete pullout from the People's Republic due to the Sino-American tariff war. In April 2020, Reuters quoted a March survey revealing that the proportion of China-based US companies who opined it would be impossible for the two economies to decouple fell to 44% from 66% in October 2019.

On the other hand, Industry Week suggested in late August that American firms operating in China had been subjected to heightened scrutiny from Chinese watchdogs amid soaring tensions between Washington and Beijing. The same month, the US and China postponed a review of their Phase One trade deal, signed in January 2020 with no new date being agreed upon by the sides.