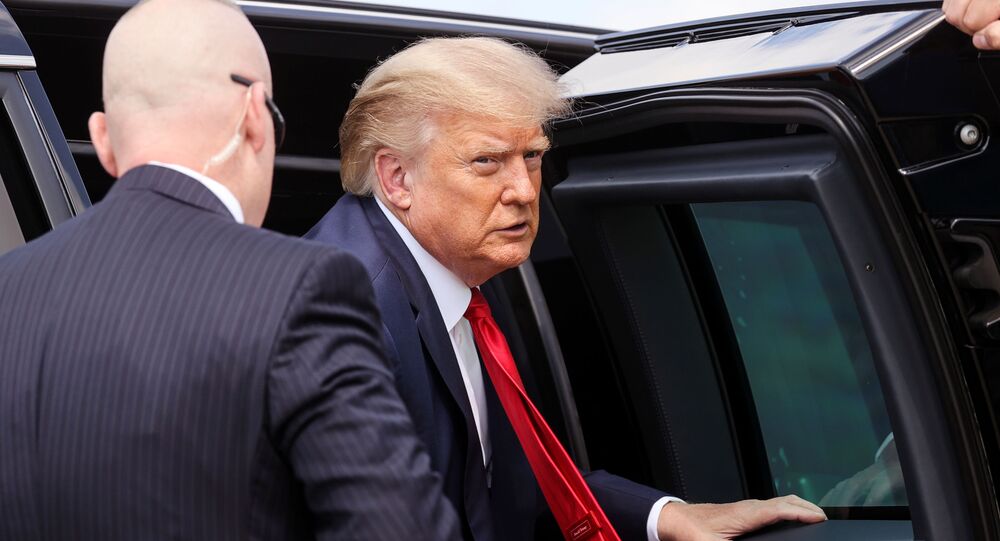 In November 2019, a longtime US columnist with Elle magazine filed a defamation lawsuit against US President Donald Trump for “false” remarks and denials of claims in her memoir that she had been raped by Trump in a New York City store in the 1990s. The president has been required by court to submit his DNA for analysis by 15 September.

The US Department of Justice is moving to substitute US President Donald Trump as the defendant in the defamation lawsuit filed against him by Elle magazine’s longtime columnist E. Jean Carroll, according to court documents.

Carroll is suing the president over making “false” public statements about her and “smearing her integrity, honesty, and dignity” after he denied her claims of being raped by him in a dressing room at a New York City store in the 1990s.

Even though the alleged incident took place at least two decades before Trump came to the White House, in a request filed to the US District Court for the Southern District of New York by the DoJ, the department argued that Trump’s comments on Carroll’s allegations came while he is the president of the United States, which gives the DoJ the right to substitute him as a defendant in the case.

“President Trump was acting within the scope of his office as President of the United States at the time of the incidents out of which the Plaintiff's defamation claim arose. Indeed, when providing the challenged statements, the President was speaking to or responding to inquiries from the press, much as the elected officials in the cases cited above were speaking to the press or making other public statements at the time of their challenged actions,” the department said. “The Westfall Act accordingly requires the substitution of the United States as defendant in this action”.

According to CNN, if the DoJ is permitted to take over the lawsuit, the case could see changes in defence lawyers or a possible delay or a complete dismissal, as the US federal government can not be sued for defamation.

“Even in today's world, that argument is shocking,” said Roberta Kaplan, an attorney for Carroll, commenting on the claim provided by the DoJ that would serve as a means to defend Trump.

Commenting on the Justice Department’s bid to become the defendant in Carroll’s suit, a White House official said in a statement to CNN that it is nothing new when the federal government becomes the defendant in court cases when elected officials are sued for making public statements, including those of a personal nature, in response to press inquiries.

“The Department's action adheres to the plain language and intent of the statute, which the courts have confirmed applies when elected officials, such as members of Congress, respond to press inquiries including with respect to personal matters,” the unnamed official said, quoted by the outlet.

Carroll filed her defamation lawsuit against Trump in November 2019, in the wake of the president denying rape claims made by the columnist in her memoir, as “totally false” and “never happened”.

The court ruled that Trump must submit his DNA before the 15 September deadline to compare it with a male DNA sample taken from the dress Carroll wore at the time of the alleged sexual assault.