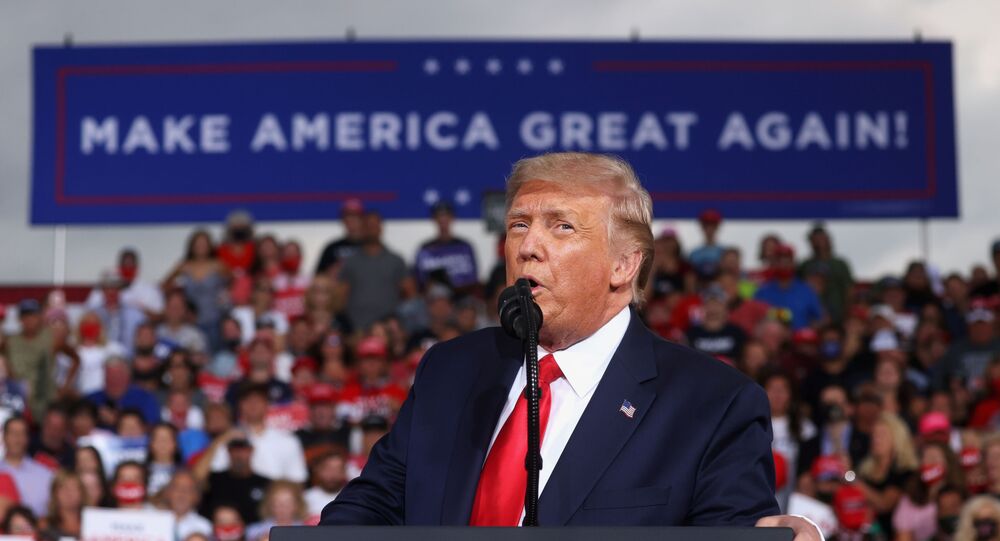 US President Donald Trump told attendees of his Tuesday campaign rally that "nobody likes" Democratic vice presidential nominee and Sen. Kamala Harris (D-CA) and that she "could never be the first woman president" of the US.

"That would be an insult to our country," Trump expressed during his Tuesday campaign rally at Smith-Reynolds Regional Airport in Winston-Salem, North Carolina, speaking of a possible Harris presidency - in the event that Democratic presidential nominee and former Vice President Joe Biden secures a November victory and then vacates his seat before his four-year term ends.

President Trump trashes Sen. Kamala Harris: "People don't like her. Nobody likes her. She could never be the first woman President. That would be an insult to our country." pic.twitter.com/VUyr3uAmVK

"If our foreign adversaries were devising a scheme to cripple America, they could hardly do better than the Biden-Kamala Harris [ticket]," he said before giving his own play-by-play of her "free-fall" campaign to be the Democratic presidential nominee.

Trump's Tuesday remarks come amid his barrage of rhetoric leveled against Harris as a response to her recent comments about a COVID-19 vaccine hypothetically being approved by the Trump administration.

Speaking to CNN's Dana Bash, Harris argued that she would "not take [Trump] for his word" regarding such a vaccine and would need the drug to be backed by a "credible" source to consider it valid.

BASH: "Let’s just say there’s a vaccine that is approved and even distributed before the election. Would you get it?"

HARRIS: "Well, I think that’s going to be an issue for all of us. I will say that I would not trust Donald Trump... I will not take his word for it." #CNNSOTU pic.twitter.com/jhxtdvaMF1

"They'll be muzzled; they'll be suppressed; they will be sidelined," Harris told Bash, speaking of public health experts who would potentially speak out against the efficacy of a Trump-approved vaccine.

Bible Signed by Trump After Infamous Church Photo Op on Sale for $37,500