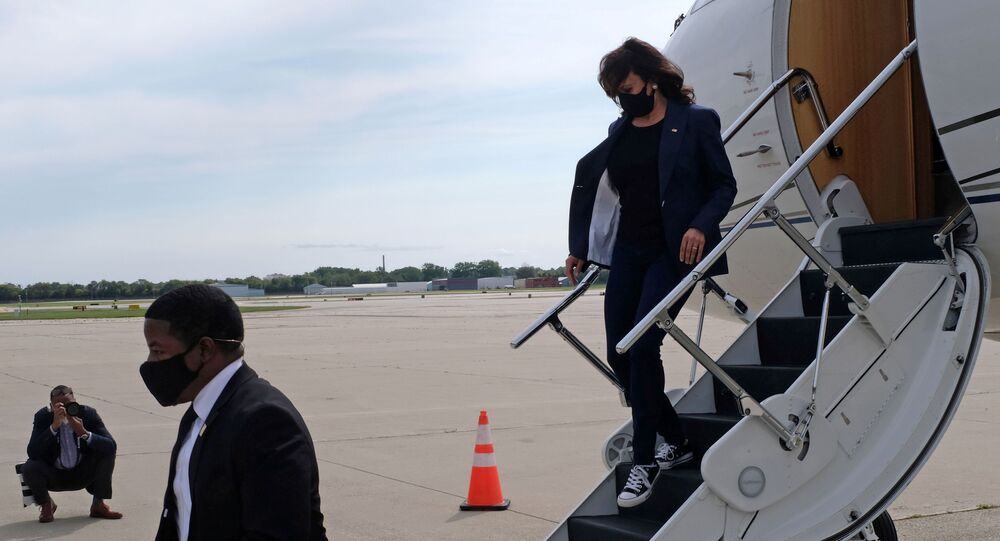 The fact that Joe Biden's running mate Kamala Harris wore sneakers for her working visit to Milwaukee drew a wave of enthusiasm on Twitter, with netizens praising her for neglecting "disabling" shoes and suggesting that Harris has endorsed a revolution in political dress for women.

Kamala Harris arrived in Milwaukee for her first trip as the Democratic vice presidential nominee on Monday, appearing to challenge the traditional culture of political attire for women by wearing a casual outfit with black Chuck Taylor Converse sneakers.

The video showing Harris in sneakers easily skipping down steps while descending from the plane rocked Twitter, with people praising her for not caring about "proper" dress code for women and assuming that the outfit is her way to show that she is "getting to work".

Users immediately described her appearance in Milwaukee as "like a boss", "cool" and "rocking those Chucks".

Kamala Harris arrives in Milwaukee for meetings this afternoon in her black hightop Chuck Taylor Converse LIKE A BOSS. pic.twitter.com/auSGfTYkso

​Some users suggested that the move could raise sales for Chuck Taylors, even asserting they would buy a Biden-Harris edition of sneakers.

To Whom It May Concern: I would buy #BidenHarris2020 high tops.

She’s so cool. Kamala represents me.

How much do I love that she's campaigning in Chuck Taylors? Turns out a whole lot.

​Some made parallels with how other women in politics usually dress, insisting that Harris' outfit showed that she was up to do "real business".

Notice how a real woman wears converse & pants getting out of a plane to do some real business.

Melania travels in flowing skirts so her hands are 2 busy holding them down, not having to intertwine with trump’s.

I'm giddy over her sneakers. No more pumps, no high heels. There's so much power you're denied when you're forced to wear disabling shoes. She's endorsing a revolution, and I am signing up.

​Fans of Chuch Taylor sneakers shared their shoes, joking that "Generation X entered the chat", referring to how these sneakers are popular among a particular age demographic.

Those black high-top Chuck Taylors are almost as nice as mine. Might get me a pair of those tho. pic.twitter.com/dt539i5Po5

Some speedily decorated their sneakers in honor of Harris.

#KHive It’s time to deck out your Converse! #KamalasChucks pic.twitter.com/wi2unaK57Z

Harris' preference to comfortable shoes is long known, as she told The Cut earlier in 2018 that she has a collection of Chuck Taylors and appeared in sneakers in 2019 while campaigning as a Democratic presidential hopeful.