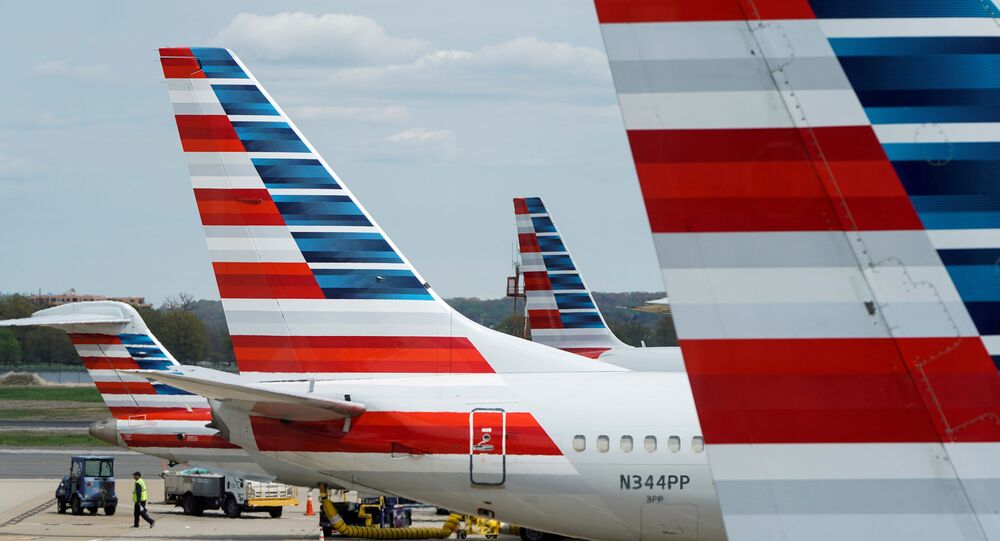 A number of AA staffers were among the first to object to the company's permission to explicitly show support for the Black Lives Matter movement triggered by George Floyd's tragic death in May, suggesting it was nothing but a slap in law enforcement's face.

American Airlines has ended up in people's crosshairs, facing protests even within its own ranks, after the carrier allowed its staffers to wear Black Lives Matter pins on their uniforms while on duty. The move has frustrated those who for instance have relatives among law enforcement, as the BLM riots in the wake of African American George Floyd's death at the hands of a white police officer tended to boil over into anti-police protests at large.

"I take offence to this", one veteran flight attendant said in an email to airline management obtained by the New York Post. "Serious offence. My husband is a LEO (Law Enforcement Officer), as was my deceased father and as far as I'm concerned ALL LIVES MATTER", she went on, stressing how "completely disgusted" she is at the fact that while "we can't show support for our GOD, our COUNTRY, our LEOs" when it comes to the BLM movement "American Airlines says that's obviously different".

“I am completely disgusted at the fact that we can’t show support for #GOD, #COUNTRY, LEOs but when it comes to #BLM org (which is controversial in itself), AmericanAirlines says that’s obviously different” https://t.co/VNfuNlTTdX

"How is that right? I don't feel included".

Another flight attendant who asked to be identified only as John suggested that those who refuse to wear the pin risk being ostracised and labelled as "racist", portraying the BLM as a "terrorist organisation that promoted violence to further their agenda".

The staffer said that should the pin be sanctioned, he would go ahead and wear his NYPD pin instead.

As the debate expanded, many took to Twitter suggesting the way one approaches AA management's permission is a litmus test for what socially relevant position they hold:

"So now the people who are against cancel culture are trying to cancel American Airlines over some BLM pins lmao", another weighed in, with a third calling those who took the news too close to heart "little crybabies melting like snowflakes in July".

Many rose in defence of the airline's move, suggesting the permission to wear BLM pins is all about promoting equality in the most general sense:

"People angry with American Airlines allowing employees to wear BLM pins — it's about recognising years of inequality, mistreatment, unchecked racism, etc. It's about Floyd, Arbery, Garner, Blake, and countless others. For once stop thinking of yourself!", one moved netizen tweeted.

However, others en masse suggested an arguably safer option would be to back law enforcement, along with free speech and democracy rather than "a Marxist" approach:

I will no longer fly American Airlines. I have choices as does the company. I choose to spend my money with companies that back law enforcement, free speech and democracy. Not a Marxist organization that has disavowed the western nuclear family.

Some even openly suggested to boycott AA, stressing they have already decided for themselves:

Shame on you AA. I used to be a road warrior for work, flew with AA exclusively. I am a million plus miler. I will rethink my air carrier for future travel.

I'm with the workers. I'll find another airline to fly.

As per the NY Post, some enraged AA employees even accused the carrier of jumping on the BLM bandwagon not to fall behind their rival, Delta Airlines, which had already reportedly introduced BLM pins for staff to wear on uniforms.

A top official at the airline defended the decision, saying she had been "taken aback" by "widespread" complaints from black AA workers about "implicit bias and direct racism from customers and other team members".

"American is truly committed to having an inclusive culture that is welcoming to all and a reflection of our country and world", Jill Surdek, the airline's senior vice president for flight services said in an email response to the enraged workers.

Surdek explained that as they are working to design an exclusive pin to show support for the social cause, in the interim until the pin is produced, people are allowed to wear a BLM one. The airline said the company's "resource groups" are busy working on several designs for various causes, including charitable groups like UNICEF and others.

"Our Christian, veterans, and LGBTQ groups, for example, have developed their own pin that can be worn as part of the uniform", the statement said.

American said it views the BLM pin push not as a political cause but as "a universal cause about humanity and equality" claiming that fundamentally, Black Lives Matter stands for equality in the most general sense of the word.

American Airlines to Lay off Another 19,000 Workers on 1 October, Senior Executives Say