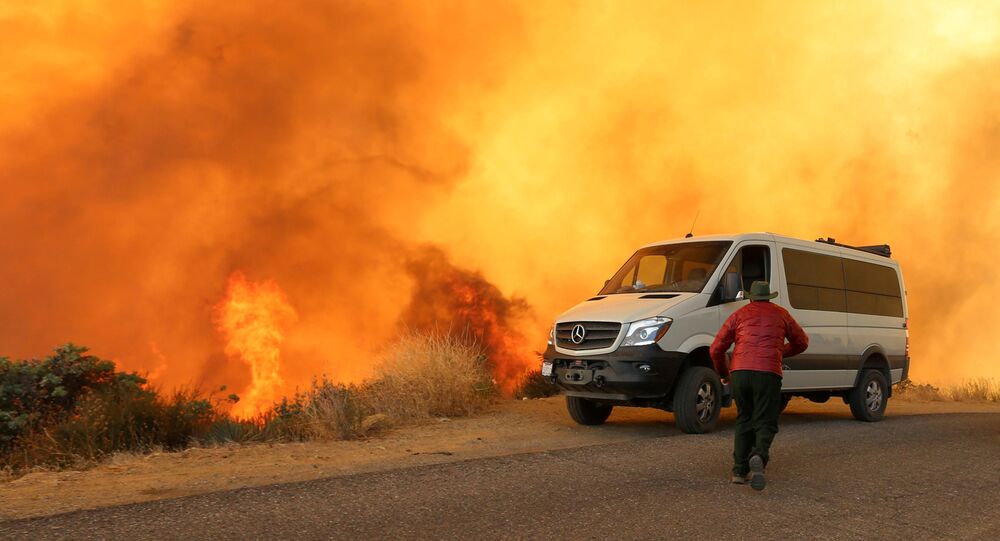 On 6 September the state’s governor, Gavin Newsom, declared a state of emergency in five counties. Firefighters are currently battling 23 fires across California that have so far destroyed 1.6 million acres of land. Some 527 firefighters from 10 crews are now trying to contain the blazes.

A gender reveal party is being blamed for the devastating fire raging in El Dorado County, California. Local officials say a pyrotechnic device used to release blue or pink smoke to announce the gender of an expected baby sparked the blaze, which at the moment of writing has burned 7,050 acres of land in southern California.

Fire officials voice hope that the fire will peter out as it is burning two miles from where the Apple fire scorched 33,000 acres of land and there is a chance that the El Dorado fire could enter the "burn scar". According to The Desert Sun, one outbuilding was destroyed and 30 buildings were threatened by the blaze. No injuries or casualties have been reported so far.

Bennet Milloy, spokesman for the local fire department, said people hosting the party were still on the scene when firefighters arrived. "We know how it started because they were still there. That, and the fact that there were surveillance cameras in the park", Milloy said, adding that it was a small family gathering.

The spokesman added that the organisers of the gender reveal party could be charged as well as cover the cost of the fire extinguishing operation, which amounts to millions of dollars. Milloy did not release any names, but said if charges are pressed they will become known to the public.

This is not the first time that a harmless gender reveal party has sparked catastrophic blaze. In 2017, a party in Arizona resulted in a fire that scorched 45,000 acres.

Meanwhile, California's Forestry and Fire Protection has released a statement urging residents to be cautious.

"[The department] reminds the public that with the dry conditions and critical fire weather, it doesn't take much to start a wildfire. Those responsible for starting fires due to negligence or illegal activity can be held financially responsible and criminally responsible", the agency said in a statement.

The blaze in El Dorado is one of 23 currently burning across California. The biggest one, known as the Creek Fire, has destroyed more than 73,000 acres of land. The situation has been exacerbated by a record heatwave, with temperature rising to 121 degrees Fahrenheit (49 degrees Celsius) and by the coronavirus pandemic. California has the highest number of infections in the United States – 740,000 and many evacuees are unwilling to go to emergency shelters, because they fear they may contract the disease.