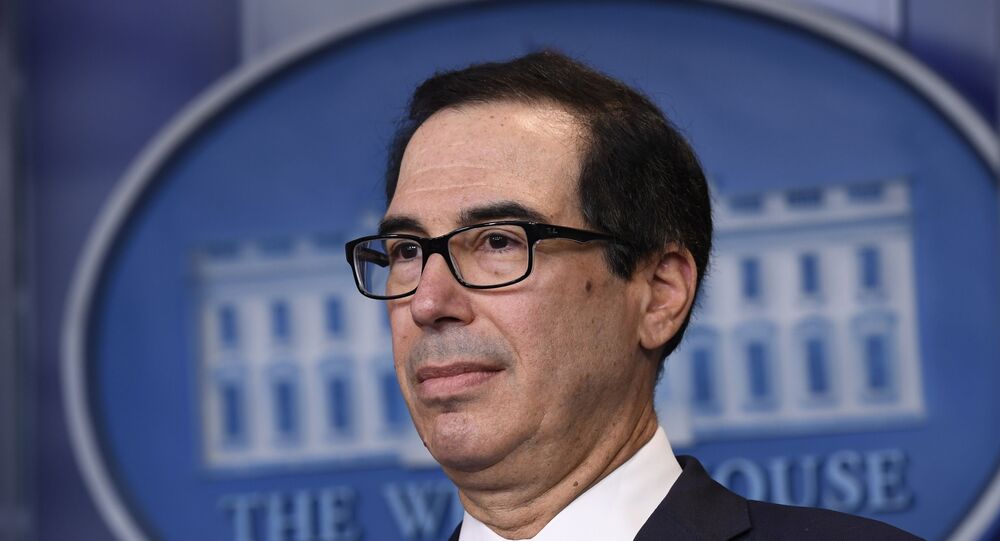 Reports emerged on Friday suggesting that the two parties have found a solution that would help to avoid a government shutdown due to disagreements over the budget ahead of the November presidential election.

US Treasury Secretary Steven Mnuchin has shared in an interview that House Speaker Nancy Pelosi, a Democrat, has agreed to a clean continuing resolution (CR) that will enable government funding possibly "through the beginning of December". He explained that the CR was needed so that the government could avoid a potential shutdown that could have come as a result of the GOP and Democrats failing to agree on a new coronavirus stimulus package akin to the $3 trillion CARES Act signed off by Trump in March.

That bill helped many American families and companies to stay afloat amid the country-wide lockdowns, but the Democrats are seeking new relief measures that would cost at least $2.5 trillion and are refusing to discuss anything less, Mnuchin explained. The head of the Treasury explained that the Republicans are looking for a milder package, citing recent changes in the American economy.

"The speaker has refused to sit down and negotiate unless we agree to something like a $2.5 trillion deal in advance. As you know, we put $3 trillion into the economy when the economy was completely shut down and we’ve now reopened the economy. Let’s do a more targeted bill now and if we need to do more in 30 days we’ll continue to do more", Mnuchin said.

The adoption of the clean CR should provide plenty of time for the two parties to discuss new relief efforts without affecting the operation of the government, Mnuchin explained, saying that the deal will hopefully be signed "by the end of the week".

In an interview with Fox News, Mnuchin also touched on the topic of new American sanctions against Iran, assuring that Washington will introduce them regardless of the position that the remaining parties to the Iran nuclear deal take. These countries earlier declined a US appeal to trigger snapback sanctions against the Islamic Republic on the grounds that the White House pulled out of the nuclear deal in 2018 and thus lost its right to initiate the mechanisms created under the accord.

© Sputnik / Maksim Blinov
Iran Nuclear Deal Participants Unanimously Reject US-Triggered Snapback Sanctions, Moscow Says
Still, the head of the Treasury expressed hope that US allies, some of whom continue to support the nuclear deal, will "understand that selling arms to Iran right now would be the worst decision that one can do" and support the unilateral American sanctions.

Previously, US President Donald Trump vowed that his country would impose all the sanctions that were supposed to be re-introduced under the "snapback" mechanism and would do everything to prevent the sale of weapons to Iran after the UN ban on the sale of conventional armaments to Tehran is lifted in October 2020.

Elite United in Getting Trump Out of Office, Correspondent Says

A second stimulus in the US is unlikely to agree on due to bipartisan effort to oust the outsider President Trump, according to Ramin Mazaheri, chief correspondent in Paris, who has been a daily newspaper reporter in the US.

"A comparison of the $3.4 trillion Democrat and the $1.1 trillion Republican stimulus plans shows that the biggest disagreement comes on the core neoliberal and libertarian tenet of eliminating government as much as possible", Mazaheri said, adding that "the vast majority of conservatives in Congress are simply not going to allow the coronavirus to roll back their four decades of efforts" to do that.

On the other side of the aisle, he said, one should not assume that Democrats are totally genuine in their desire to extend greater help to American citizens, Mazaheri said.

"Allowing an already-festering country to rot for months in order to win an election sounds like bad governance bordering on treason, but the anti-Trump faction among the political elite is surely willing to do anything to get the rogue politician out of office", he said.

Trump was elected in 2016 precisely because he defied Republican leadership and ideology, so the best way for him to get re-elected would be to revert to that form, and to send another round of direct stimulus to voters, Mazaheri said.

Remaining deadlocked on a coronavirus relief plan "crucially allows 'the swamp' to do something which they emphatically agree on: blaming Trump for every problem in order to get the unprecedented outsider out of office", Mazaheri concluded.