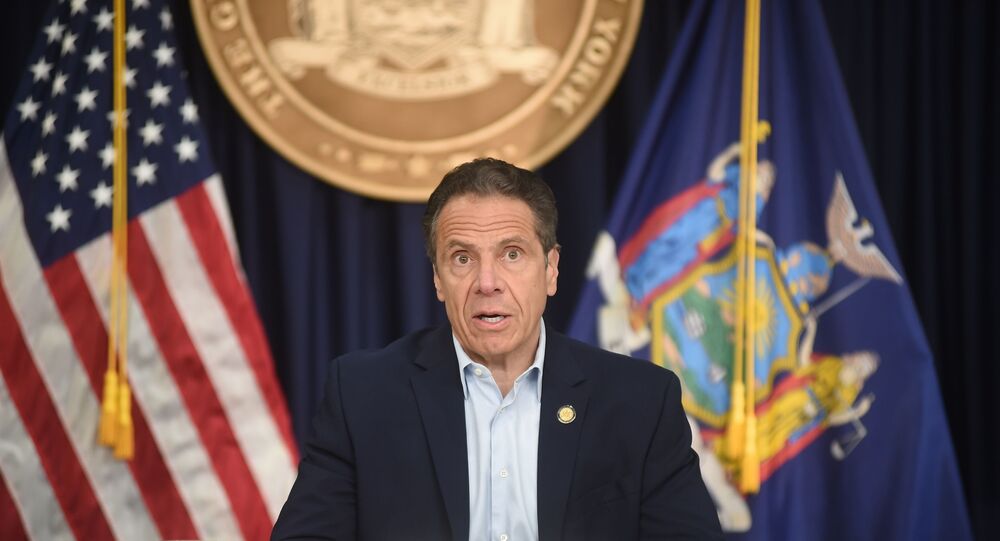 Joseph Imperatrice also accused the two politicians of being selective about when to enforce the law on Saturday's edition of Fox and Friends, commenting on Cuomo's reported intention to use 4,000 officers to enforce social distancing in restaurants as part of a return to indoor dining.

"Politicians like him pick and choose when they want officers to enforce the law," Imperatrice said. "What happens is they pit the officers against the community, which is never good."

And he hit out at de Blasio for ordering cops to enforce pandemic regulations on wearing face masks in public, while also threatening to cut $1 billion from the NY Police Department budget amid Black Lives Matter protests and reassign some 600 plain-clothes anti-crime officers to other duties.

"You want officers to go out there and enforce the laws in New York City where shootings are happening every single day in communities of color," Imperatrice pointed out.

"We have to go to the neighborhoods, target the crime, get the bad guys off the street, and not worry whether or not somebody is sitting down and having dinner with a facemask."

The number of shootings in New York City soared by 166 percent in August, with murders up by nearly half.

© REUTERS / JOSHUA ROBERTS
'Persona Non Grata in NYC': Trump Will Need an Army to Walk Down the Streets Of New York, Says Cuomo
Former NYPD Lieutenant Darrin Porcher called for a crackdown on rioting after scenes of violence and several arrests for vandalism at Friday night's Black Lives Matter protests in Manhattan.

"We need to eradicate these riots and stop them," Porcher said. "When we look at what is happening in Portland, Seattle, and Chicago, Democratic leaders have done nothing, and doing nothing has subsequently led to this criminal behavior festering, subsequently creating more people that are hurt as a result."

The Blue Lives Matter campaign was founded in 2014 in response to the Black Lives Matter movement. It calls for killings of law enforcement officers to be prosecuted as hate crimes.

New York has been hit hardest by the Covid-19 pandemic, with over 25,000 deaths recorded since March 1 - most of them in New York City.

Measures adopted to halt the spread of the virus include so-called social distancing, where individuals must keep a certain distance apart from each other, and mandatory wearing of masks over the mouth and nose in public spaces.