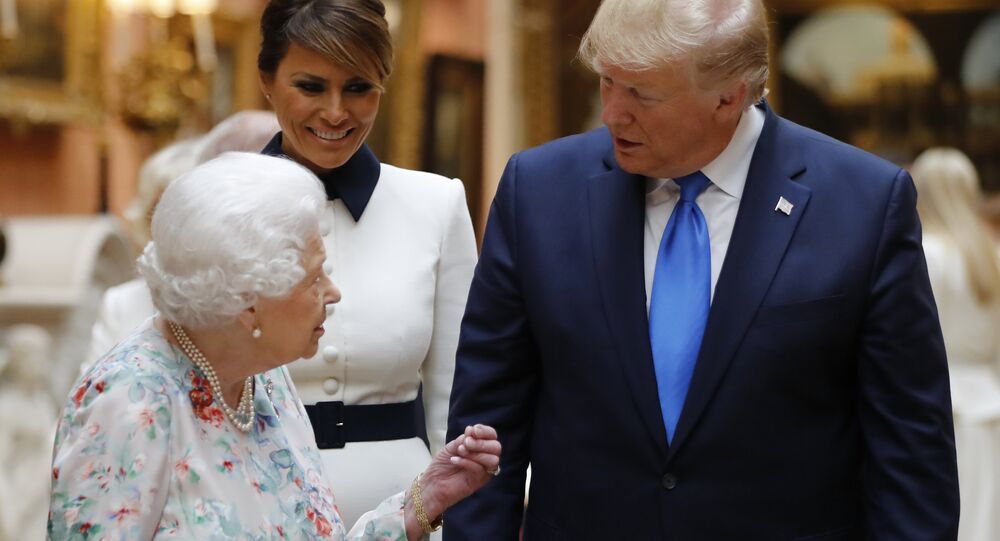 While the long-awaited visit to Queen Elizabeth's residence was being set up, concerns mounted Donald Trump could come face-to-face with crowds of citizens protesting his visit in downtown London.

Having first been invited for a state visit by the British Queen in January 2017, POTUS Donald Trump only took up the invitation and arrived in the UK in the summer of 2019, demanding that he and his family stay at Buckingham Palace despite the royal premises being renovated at the time, The Daily Telegraph reported citing sources.

As the high-profile visit was being organised, White House aides reportedly told Downing Street it "was critically important" that Trump be allowed to stay overnight in the royal residence in London. According to the British newspaper's sources, President Trump expected the same treatment as his predecessor Barack Obama, who stayed overnight at Buckingham Palace with his wife Michelle during the ex-first couple's state visit in 2011.

What really complicated the matter was that Buckingham Place was under extensive renovation at the time, with entire areas shut down and several royal household members moved out for some time.

This reportedly prompted Downing Street aides to request a room-by-room breakdown of refurbishment plans in order to put up Trump, First Lady Melania, and the president's four eldest children - Ivanka, Donald Jr, Eric, and Tiffany – as requested, but it all played out differently in the end.

"It was very, very clear Trump loved the Queen. He wanted to spend as much time as possible with the Queen and to stay at Buckingham Palace", one UK official shared with The Telegraph, insisting that the essential thing was to rule out "a snub story" unfurling:

"We went to the point of saying to the palace, 'Can you tell us which rooms are undergoing refurbishment?' It was properly looked into. The last thing we wanted was a snub story coming out. But it couldn't work".

POTUS ultimately stayed at Winfield House, the US ambassador's residence in Regent's Park in London, amid spiralling concerns, as per one cited White House adviser, that the noise from a nearby mosque would wake the president up ahead of schedule the next morning.

Incidentally, there appeared to also be fears that Trump would have a "hissy fit" if he saw protesters vehemently opposing his visit – something the president could blame on the British government. Indeed, quite a few people took to central London to oppose POTUS’s visit, with a huge inflated baby Trump balloon featured in multiple videos and photos.

"He'd engage in a really nasty way, in a way that would end up blowing the entire relationship. You've seen him have a hissy fit with Justin Trudeau [the Canadian prime minister] and other leaders", the aide went on.

© AP Photo / Matt Dunham
The 'Trump Baby' blimp is inflated in Parliament Square in central London as people start to gather to demonstrate against the state visit of President Donald Trump, Tuesday, June 4, 2019

Separately, another point of consideration was the possible comparison with state visits by Trump's predecessors. According to an ex-White House aide, the offices of the first lady and the president's chief of staff, requested a document that detailed modern US presidents who were offered UK state visits, including Obama and George W Bush.

The minutest details of each trip were logged, including their duration and the proposed programme, allowing advisers to compare the visits upon Trump's request.

During the president's trip, he was taken to Sandhurst, where British Army officers are trained, and a staged hostage rescue for UK and US special forces was showcased, involving a rope descent from helicopters and imitation gunfire.

POTUS was also taken to Chequers, where he sat and appeared to pose like war-time PM Winston Churchill for pictures.

Trump had visited Britain a year earlier to see then-Prime Minister Theresa May, but their meeting was overshadowed at the time by the president's derogatory remarks about the May-proposed soft Brexit agenda, which Trump said would "kill" any future trade deal with the US. He later apologised for his harsh statement after May approached him over the comments.

US Election; Trump; Epstein; Coronavirus in US & UK