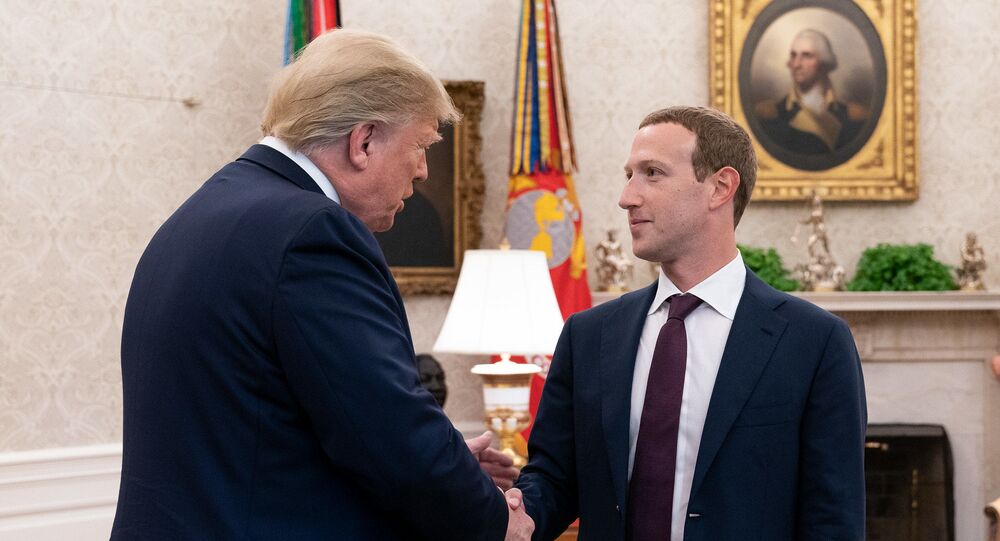 Google, Facebook, and other social media companies, like Twitter, have come under pressure from Democrats, who have claimed that the tech giants' platforms were used to influence the result of the last election and could be used to tip the scales in the upcoming vote.

Facebook CEO Mark Zuckerberg has warned of the risk of civil unrest in the United States during and after the presidential election. Speaking to Axios, Zuckerberg said it is necessary to do everything to reduce the chances of violence in the wake of the 3 November vote.

"There is, unfortunately, I think, a heightened risk of civil unrest in the period between voting and a result being called. We're trying to make sure that we do our part to make sure that none of this is organized on Facebook. I think we need to be doing everything that we can to reduce the chances of violence or civil unrest in the wake of this election", Zuckerberg told Axios.

80 million people are expected to vote by mail in the upcoming election in the United States due to the severe coronavirus situation in the country. President Donald Trump has strongly opposed the measure, saying this could result in election fraud. Trump has also claimed that the results might not be known "for months or for years" because the ballots could be lost or fail to arrive in time.

Commenting on a potential delay in counting the votes, Zuckerberg said Facebook and news organisations should start "preparing the American people that there's nothing illegitimate about this election", even if it takes "additional days or even weeks to make sure that all of the votes are counted".

"So we're going to do a bunch of different messaging around that just to make sure that people know that that's normal", he told Axios.

His statements come two months before Americans choose their next president in what is expected to be a contentious election between incumbent Donald Trump and his Democratic rival Joe Biden. Google, Facebook, and other social media companies like Twitter and YouTube have been under pressure from Democrats, who have claimed that the tech giants' platforms were used to influence the results of the last election and could be used to tip the scales in the upcoming vote. However, big tech companies have also been criticised by the Trump administration for being biased against the president and conservatives.

© AFP 2021 / MANDEL NGAN
Trump Will Be 'Stacking Sandbags' Around White House in His Fight for Re-Election, Bill Clinton Says

On Thursday, Facebook announced a new policy under which, among other things, all political ads will be banned within a week of Election Day. Zuckerberg said the company will also attach an information label to content aimed at delegitimising "the outcome of the election or discuss the legitimacy of voting methods, for example, by claiming that lawful methods of voting will lead to fraud".

In addition, the company will flag posts made by candidates who try to declare victory before the final results have arrived. "We’ll add a label to their posts directing people to the official results from Reuters and the National Election Pool", the company said.