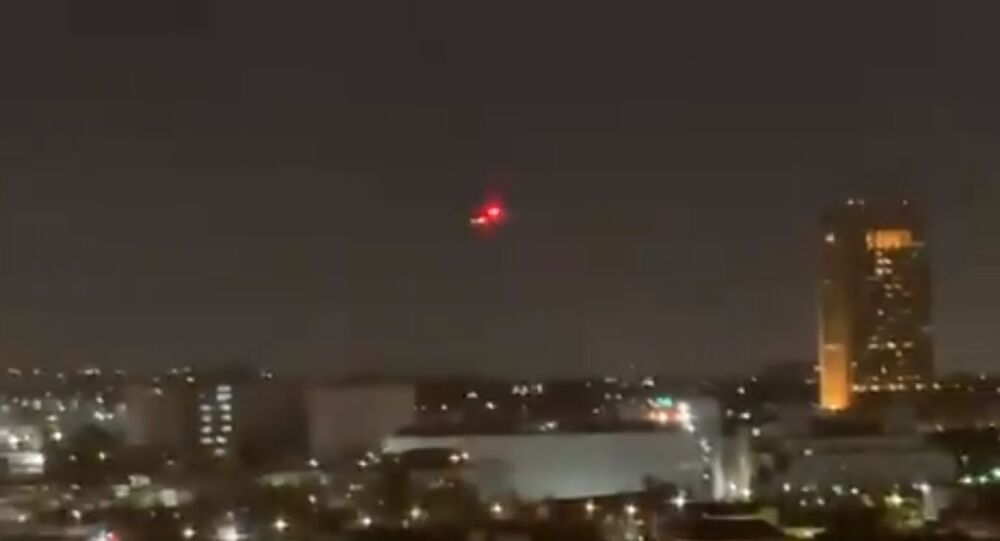 Social media users spotted multiple military helicopters buzzing over Los Angeles on Tuesday night, with the choppers reportedly circling highways, hovering close to the ground and making landings on top of skyscrapers in the downtown area.

The US military is keeping silent about a recent string of videos posted to social media from greater Los Angeles showing unidentified blacked-out helicopters, some of them with their lights off, flying over the city.

Multiple clips of the unusual activity have been posted to Twitter, prompting users to ask what’s going on.

Anyone know what is going on with these four helicopters flying in circles really low, fast and with their lights off through the NELA and DTLA areas? Is this some kind of helicopter race or chase? Any MTA employees know anything? pic.twitter.com/ZlzgOOyVgX

Anyone know what’s happening with all of these helicopters landing and then flying away in DTLA?#LosAngeles #helicopter #live #downtownlosangeles pic.twitter.com/sLvo64DWb7

The Drive contributor Tyler Rogoway said the choppers were MH-6 Little Birds, and that they were piloted by the Army’s Night Stalkers, also called the 160th Special Operations Aviation Regiment (SOAR), which reportedly regularly engage in training across major US cities, sometimes alongside Navy SEALS, Rangers, the Special Forces Marines, or Delta Force.

“Sometimes they even work with federal law enforcement direct action teams, like the FBI’s vaunted Hostage Rescue Team (HRT) and folks from the intelligence community. This type of military operations in urban terrain training is precisely what people are seeing over downtown Los Angeles tonight,” Rogoway suggested.

The military affairs journalist added that the US Army customarily gives “little if any warning to the public” before starting drills, which he suggested “always causes everything from great concern to outlandish conspiracy theories”.

Two members of the 160th SOAR were killed and three others injured last week after their Blackhawk helicopter crashed on San Clemente Island west of San Diego. In early August, nearly a dozen Marines and a Navy sailor were killed after their amphibious vehicle sank in the island’s vicinity.

© REUTERS / STEPHEN MATUREN
Los Angeles Police Station Spray-Painted with BLM Graffiti, American Flag Set on Fire by Protesters
Many Americans have been on edge in recent months in the wake of anti-racism and police violence protests raging following the killing of an unarmed African American in Minneapolis by a white police officer. Although the demonstrations have reportedly been mostly peaceful, some have turned violent, degenerating into looting, arson and attacks on bystanders, prompting police, federal law enforcement and the National Guard to be deployed across major cities. The protesters’ anger intensified late last month in the wake of the August 23 shooting of a black man by a white police officer seven times in the back in Kenosha, Wisconsin.

On Friday, Los Angeles police reported that about 50 ‘defund the police’ rioters had vandalized one of their precincts, attacked a police vehicle and set an American flag on fire.