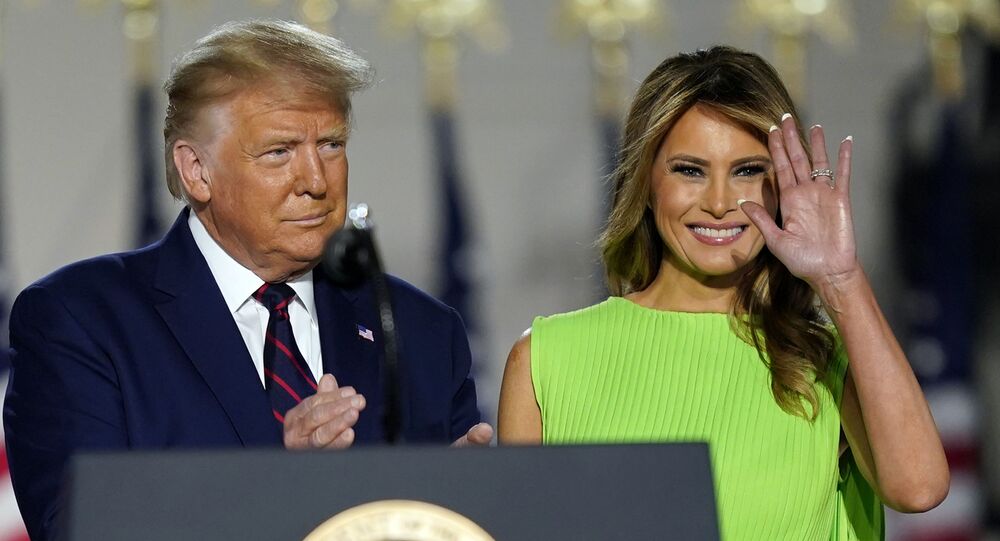 The tape, in which Trump talked about groping and kissing women, was released a month before the 2016 election and marred his presidential campaign - but was not powerful enough to change the outcome.

Melania Trump laughed about the recording of her husband making vulgar comments about women, her former friend claims.

Stephanie Wilson Wolkoff, Melania's ex-advisor whose memoir about her long-time relationship with the US first lady hit the shelves on Tuesday, made the comments about the infamous "grab 'em by the p***y* tape in a interview with ABC's Good Morning America.

"The day that the 'Access Hollywood' tape came out she reached out to have lunch," she recalled of her meeting with Melania. "Now, if any other human being or any other one of my friends I would have expected to see them in tears, right? She was smiling. It was as if nothing happened."

Wilson added: "I said to her, how many times have you heard the word p**** and president in the same sentence and we burst out laughing. Then I said are you upset and doesn't it get you angry and Melania is a pragmatist. Melania, if you can't control people's emotions, then why even worry about it. And that's how she lived her life and that is what she stood by every day."

The recording of Donald Trump lewdly talking about kissing and groping women was published by The Washington Post in October 2016, a month before the presidential election. It was taped in 2005 when he was preparing to appear on the TV programme Access Hollywood.

The comments sparked widespread outrage and prompted several Republican senators and governors to withdraw their endorsement of Trump.

His campaign initially played down the recording, saying in a statement: "This was locker room banter, a private conversation that took place many years ago. Bill Clinton has said far worse to me on the golf course - not even close. I apologise if anyone was offended."

Melania said at the time: "The words my husband used are unacceptable and offensive to me. This does not represent the man that I know." She added that she was hopeful that "people will accept his apology, as I have".

Wilson Wolkoff's tell-all, titled Melania and Me, doesn't appear to contain much that will concern the first couple. Some of the most damning allegations are that the first lady was recorded making "disparaging remarks" about her husband and his adult children, and that she was "much more concerned" about redecorating the White House after the Obamas' departure than with Donald Trump's infidelities.

Wilson, a New York party planner, departed the White House in February 2018 after it emerged that Donald Trump's inaugural committee paid $26 million to a firm she founded to plan events around his inauguration.