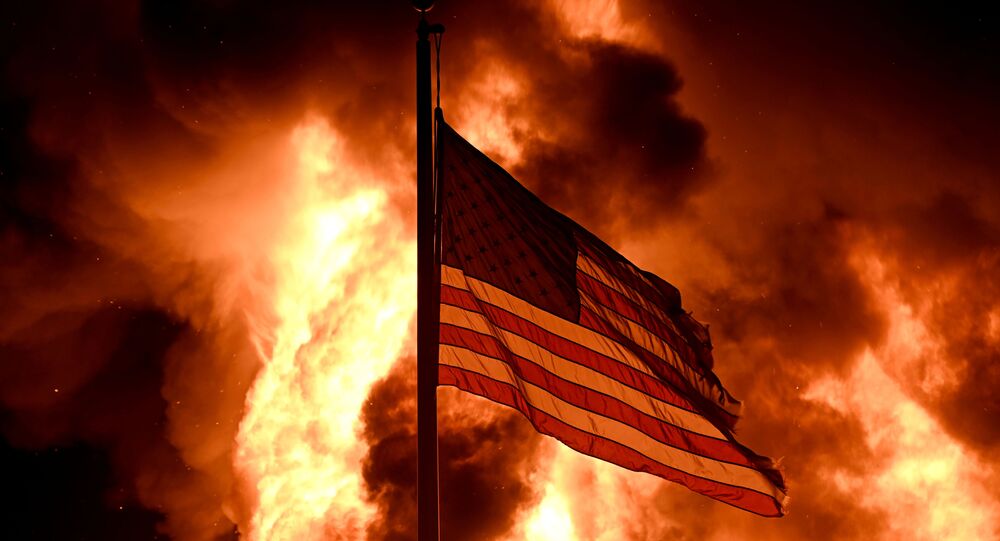 Street violence linked to demonstrations condemning racial injustice and police brutality erupted with fresh force in US cities recently, feeding into the wave of protests prompted by the killing of Afro-American former convict George Floyd by a police officer in Minnesota.

A mob of around 50 “defund the police” rioters vandalized a Los Angeles police station on Friday night, allegedly spraying graffiti on the walls and setting an American flag on fire, reported Fox News, citing the local police.

The dark-clad, masked group reportedly gathered in Los Angeles' Van Nuys neighbourhood at 11 p.m., yelling anti-police slogans as they closed in on the police station, according to an LAPD statement on Monday.The American flag was then removed from a pole in front of the station and set on fire, said the police.

The outside walls of the station were allegedly spray-painted with Black Lives Matter (BLM) graffiti by others in the group.

These are the images left at @lapdVanNuysDiv by dozens who the @LAPPL says were part of a “defund the police riot.” @LAPPL says @LACity Councilmember @MikeBoninLA is encouraging this type of behavior. The story & @MikeBoninLA’s response on #KCAL9 4pm @CBSLA 5pm (📸: @LAPPL) pic.twitter.com/xvkTmvF10C

​The LA Police Department posted a tweet featuring phrases like "Ya'll gonna lose pigs," and "ACAB", the acronym for "All cops are bastards," sprayed on the walls.

The LAPD report claims some protesters spotted a vehicle with uniformed police officers inside and attacked it, trying to prevent it from driving away. The officers eventually put the vehicle in reverse and left.

While there were no details released about the extent of the damage to the police station, the department issued a statement that read:

"We will not tolerate the vandalism of our community police stations. While spray paint can be removed and flags can be replaced, each instance of violence/destruction causes fractures to our shared community health."

The incident was slammed by the union representing rank and file police officers, the Los Angeles Police Protective League, which branded it a "pathetic reflection of those who continue to promote hate, violence and destruction to justify their dangerous anarchist agenda that calls for the abolishment of police officers in the city of Los Angeles."

The incident came after protesters reportedly vandalised the home of LAPD Chief Michel Moore in the San Fernando Valley with anti-cop posters on 27 August.

SURPRISE ACTION: Protesters with the activist organization Black Future Project made flyers for a protest at DA Jackie Lacey’s house, but in a switch, the group is now at LAPD Chief Michael Moore’s house to stage a Die-In.

​A video of the incident was reportedly captured by journalist Samuel Braslow with the Beverly Hills Courier, as footage showed a group of people infiltrating the gated community through a pedestrian gate and shouting:

"We are at Chief Moore's house. He is the chief of LAPD. The most brutal police force in the nation."

While a vandalism report was taken, no one was placed into custody over the incident, according to the LAPD, cited by Eyewitness News.

The recent incidents of street violence come amid heightened tension fuelled by nationwide anti-racism and police brutality protests, originally sparked by the killing of black former convict George Floyd in police custody in Minneapolis and most recently intensified by the shooting of Jacob Blake, another black man charged with sexual assault, in Kenosha, Wisconsin.

© REUTERS / Tom Brenner
Jacob Blake Sr, the father of Jacob Blake, who was shot by police in Kenosha, Wisconsin, addresses the "Get Your Knee Off Our Necks" Commitment March on Washington 2020 on the spot where Rev. Martin Luther King Jr delivered his "I Have a Dream" speech 57 years ago today in Washington, U.S., August 28, 2020. REUTERS/Tom Brenner

A filmed incident dated 23 August showed a white police officer shooting Blake seven times in the back, leading to permanent paralysis from the waist down.

In numerous instances, the protests have transformed into riots, accompanied by arson, vandalism and looting, with police and civilians targeted by violence.

2020 Race, COVID & BLM Protests: This is Time of Great Unease for US Jewish Community, Rabbi Says