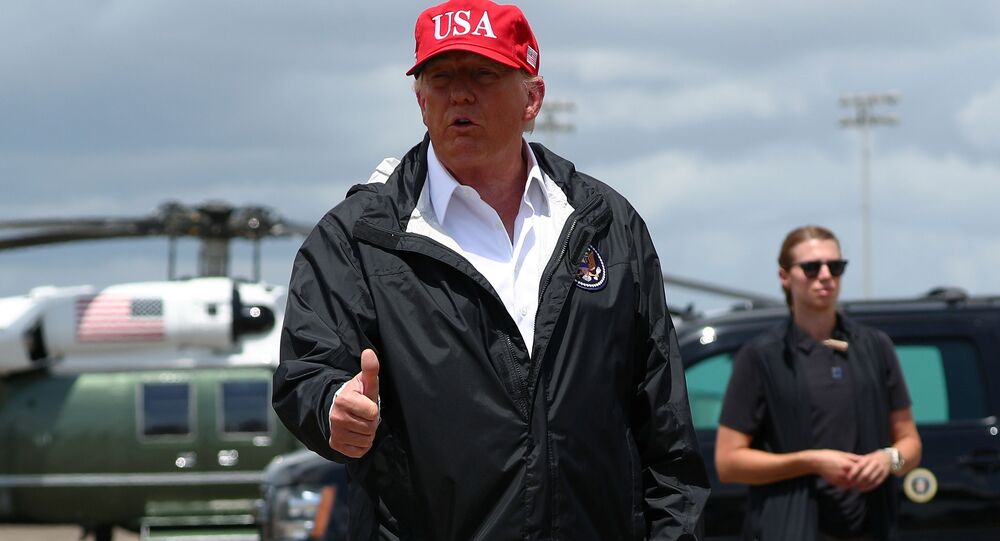 Months of often-violent anti-racist protests which have engulfed the US from May threaten to pull rug out from under the Democrats, who closed their eyes to looting and rioting, say American observers outlining how Donald Trump can raise victorious and even receive a large share of the African American vote.

While Donald Trump has announced that he will travel on Tuesday to Kenosha, the scene of recent riots and deadly clashes, Democrats are feeling increasingly uneasy over the possibility of looting and violence in cities hitting Joe Biden's election chances and boosting those of President Trump, according to the US mainstream media.

'Dems are Worried They are Going to Lose'

The latest Marquette Law School poll of registered voters in Wisconsin indicates that not only Republicans but also Democrats and independents are growing weary of the street violence and unrest caused by the nationwide marches over George Floyd's death in police custody in late May. Though 61% of American respondents were approving and just 36% disapproving of the protests in June, in August this correlation changed to 48% versus 48%, according to the pollster. Likewise, favourable views of the Black Lives Matter movement, which is spearheading the protests, declined by 10 percentage points in August although a plurality still held favourable views. At the same time, "large majorities oppose calls to defund the police", the pollster admitted.

​Donald Trump, who has been critical of the unrest from the outset, lashed out at protesters during his New Hampshire rally on Friday, calling them "anarchists", "agitators", "rioters", and "looters".

"They don't even know who George Floyd is. If you ask 'em: 'Who's George Floyd?' they couldn't even tell you," the president said, emphasising a "law and order" message to US voters.

"The Trump campaign has already aired ads juxtaposing Harris, Biden and other Democrats claiming the riots are ‘peaceful’ protests juxtaposed with images of looting and burning", notes Stroock. "The Democrats are scared and we can tell because they are belatedly condemning the violence."

What's worse for the Dems, while they are worried they are going to lose, they can't blame Trump, because they have caused all the problems, not him, admits Paul Taylor, a US political analyst.

The Democrats have clearly miscalculated the potential consequences of Black Lives Matter protests, according to James Fetzer, professor emeritus at University of Minnesota: "Democrats have been so eager to unseat Trump that they have been unable to perceive the damage it would do to their cause to support rioting, looting and arson by BLM and Antifa".

"When Harlem residents were interviewed about defunding the police, they were opposed to it," the professor points out. "Some even said it would be suicide! [New York City Mayor] De Blasio sacking 600 undercover cops and allowing attacks on 5th Avenue shops has led to a mass exodus of the wealthy, who pay 60% of the taxes."

A Gallup survey carried out from June 23 to July 6 indicated that 81% of African-Americans want police to spend the same amount of time or even more time in their area.

"Trump will receive a large share of the black vote," Fetzer predicts.

Democratic Party's Rhetoric Has Been Violent Since Trump's Day One

By turning a blind eye to the growing violence amid the protests, the Democrats have walked right into a trap, opined Andrew Sullivan, a British-born American author, in his 28 August blog post: "If law and order are what this election is about, they will lose it," he predicted.

Touching upon the unrest in Kenosha over the police shooting of Jacob Blake, an African American man who had been charged with rape and sexual assault, and subsequent clashes in the streets which claimed the lives of two people, Sullivan underscored that "rioting and lawlessness is evil" and that the Dems' hesitance to condemn rioters and looters and wipe radicals out of their ranks could cost them the 3 November election.

"Democrat mayors in Portland, Seattle, Chicago and Kenosha have hamstrung the police and refused Federal help," William Stroock recollects. "On Stephen Colbert’s show, Kamala Harris said of the BLM and Antifa rioters, ‘They’re not gonna let up and they should not.’ Democrat Congresswoman Ayanna Pressley has said, ‘There needs to be unrest in the streets’. Only belatedly, now that they see the riots hurting them have Biden, Harris and other Democrats condemned the violence. It’s already too late."

However, even before the BLM protests, the Democratic Party's rhetoric had been violent, which prompted polarisation and divisions within American society, according to Stroock. In June 2017, left-winger James T. Hodkinson shot and wounded Republican Congressman Steve Scalise at the annual Congressional Baseball Game for Charity in Alexandria, Virginia, the political analyst recollects.

For weeks Democrat politicians and the media have embraced and stirred up the mobs.

At what point will they condemn the violence? pic.twitter.com/SDWgKEIYZd

​He also describes how Republican Senator Rand Paul was surrounded by a screaming mob of more than 100 people near the White House after leaving the convention on Thursday. Police had to step in to shield the senator. “[Paul]’d either be in very bad shape, or dead, and that would include his wife, if those policemen didn’t happen to be there,” Trump remarked while commenting on the incident on Friday.

Trump's "law and order" message appears to be a winning strategy against this background, Stroock asserts.

"Law and order is a great issue to run on. It worked for Nixon in 1968 and it’s working for Trump right now," he underscores.