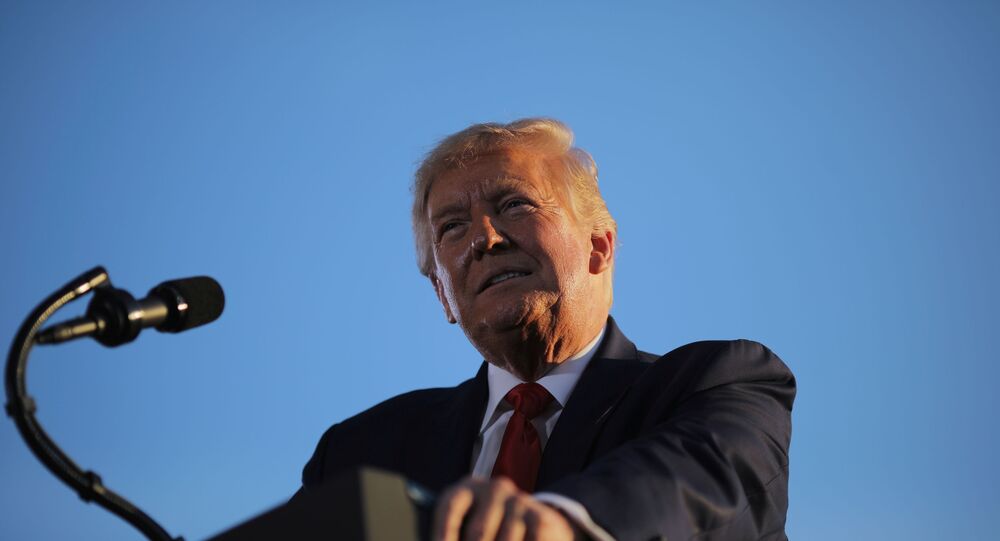 Trump's hostility toward what he describes as 'the Radical Left', considering the majority of his Democratic rivals to fit this label, is well known. The president also repeatedly denounced Democratic city governors that rejected the deployment of federal security forces to curb the protests against police brutality and racism.

US President Donald Trump lashed out at Portland Mayor Ted Wheeler in a series of tweets on Sunday, denouncing the latter's response to civil unrest. The city has seen waves of massive protest, sparked by the death of George Floyd while in police custody, for the past couple of months.

Trump castigated Wheeler for watching "great death and destruction of his City during his tenure", declaring that "the only way you will stop the violence in the high crime Democrat run cities is through strength!".

"Ted Wheeler, the wacky Radical Left Do Nothing Democrat Mayor of Portland, who has watched great death and destruction of his City during his tenure, thinks this lawless situation should go on forever. Wrong! Portland will never recover with a fool for a Mayor", Trump began his Sunday tweets, later insisting that the "people of Portland want Law & Order".

Trump also claimed that Wheeler "tried mixing with the Agitators and Anarchists and they mocked him", slamming the mayor's attempts to blame the federal goverment, that, as Trump stated, "has only been there with a small group to defend our US Courthouse, because he couldn’t do it".

..The people of Portland, like all other cities & parts of our great Country, want Law & Order. The Radical Left Democrat Mayors, like the dummy running Portland, or the guy right now in his basement unwilling to lead or even speak out against crime, will never be able to do it!

​His tweets followed Wheeler's press briefing, where Portland's Mayor blamed the President's "petty politics" for the ongoing violence - hours after Trump called him a "FOOL" in his Twitter on Sunday morning.

"Do you seriously wonder, Mr. President, why this is the first time in decades that America has seen this level of violence?” Wheeler said. “It’s you who have created the hate and the division. It’s you who have not found a way to say the names of Black people people killed by police officers even as people in law enforcement have, and it's you who claimed that white supremacists are good people.”

The squabble between Trump and Wheeler comes as Portland is rocked by massive protests, with some turning violent. The president has several times offered a deployment of federal agents, referring to Kenosha, Wisconsin, which also saw riots after a white police officer shot a black man, Jacob Blake, in the back. Trump asserted that as soon as the National Guard entered the city, the violence stopped.

Wheeler has repeatedly rejected Trump's offer of federal agents, accusing the president of pulling a political stunt, and asserting that "we don't need your politics of division and demagoguery".

Shortly after that, however, Wheeler saw protesters arriving at the lobby of his apartment with demands that he "resign, abolish the police by 2022 with no tech or private replacement, and allots [sic] saved resources to BIPOC communities and city services".

Portland demonstrations, some of which have evolved into rioting, have been continuing for several months, with violence, vandalism, fires and clashes with police. The city earlier saw some violent attacks on US federal courthouse and local businesses.

Earlier on Saturday, amid the clash between the Trump supporters and Black Lives Matter activists that took place in Portland's Clackamas suburban area, a man was killed in a shooting incident. An investigation into the matter has been launched.