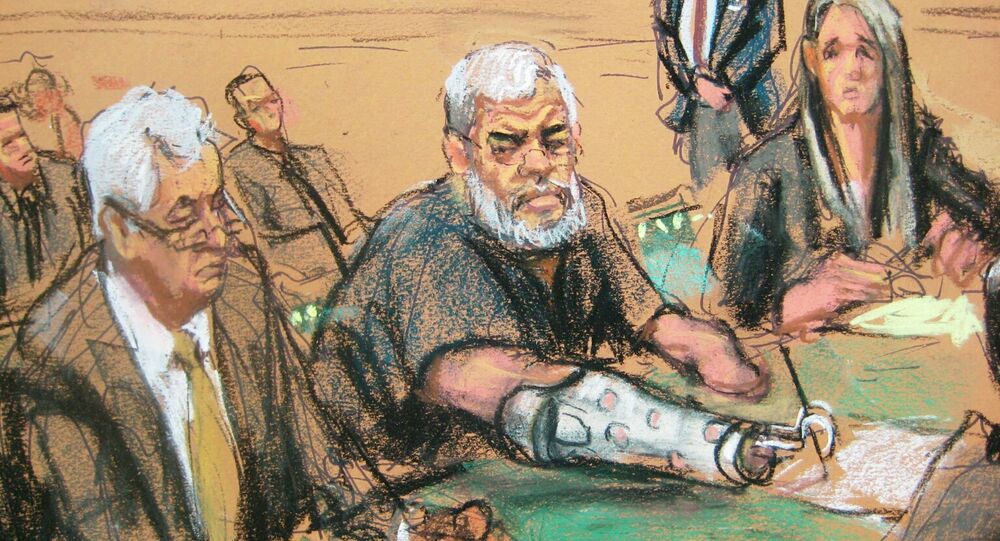 Since 2012, notorious terrorist and radical Islamic preacher Abu Hamza al-Masri, also known as the Hook Hand, has been serving a life sentence for multiple terrorism-related offences. Incarcerated in the US state of Colorado’s ADX Florence prison, “the Alcatraz of the Rockies”, al-Masri is in one of the highest security complexes in the world.

Radical Islamic preacher Abu Hamza al-Masri, a UK national of Egyptian origin, is suing US authorities over “inhuman and degrading” conditions and breaching his human rights at Colorado’s ADX Florence prison, where he is serving a life sentence for multiple terrorism-related offences, UK newspaper The Times reported on Saturday.

In a civil lawsuit filed against US Attorney General Willian Barr, Abu Hamza complains of “cruel and unusual conditions in prolonged, continuous, dangerous solitary confinement since 2012”, the year in which he was extradited from Britain to the US to stand trial for supporting the al-Qaeda* terrorist organization.

Convicted and sentenced in 2015 to life in prison without the possibility of parole, Abu Hamza also accused the US authorities of violating his human rights via a number of alleged wrongdoings, including disregarding his disabilities.

Abu Hamza argued that prison authorities removed his hooks, despite the fact that he has no forearms and he is blind in one eye.

He also claimed that, on one occasion, he had not been able to cut his toenails for at least 14 months, what caused him “severe pain and difficulty walking”. Abu Hamza added that due to the removal of his hooks he also had to open food packages with his mouth, causing him to loose some his teeth.

“Plaintiff lost three teeth just to the opening of pouches,” he wrote in the court documents, as cited by The Times. “All front teeth are worn out and painful. Some nerves can be seen.”

The 62-year-old prisoner complained of being “religiously stressful”, as he has been forced to switch from a Muslim halal diet to a “kosher” as the Jewish meals are served on trays, he said are “easier to eat from”.

In 2004, UK authorities detained Abu Hamza in response to a request by Washington to extradite the radical imam to face terrorism-related charges. In 2006, he was charged in Britain with 16 offences for “inciting violence and racial hatred” and was sentenced to seven years imprisonment.

By the end of his imprisonment in the UK, the preacher was extradited to the US and was convicted and sentenced to lifetime prison on 11 counts of terrorism, including hostage-taking in Yemen in 1998, efforts to create a terrorist training camp in Oregon in 1999 and facilitating violent jihad in Afghanistan in 2000 and 2001, along with supporting al-Qaeda.

*Al-Qaeda is a terrorist organisation banned in Russia and many other coutries around the world.

Anjem Choudary Should Not Be Free