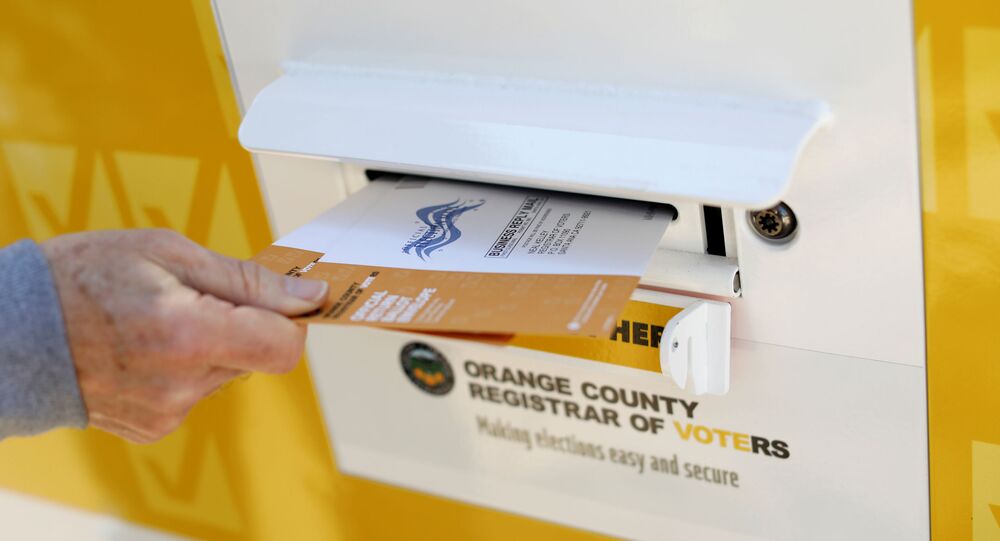 Mail-in balloting has been touted by Democrats as a safer option to vote amid the coronavirus pandemic, although it is actively opposed by US President Donald Trump, who fears election fraud - which, according to some reports, may not be baseless.

Election rigging through mail-in balloting can - and has - been done, according to a story by an unnamed top Democratic operative who is familiar with such business, published by New York Post.

As hot debates over voting by mail unfold amid approaching the US presidential election, an anonymous political insider described some techniques that he used in his job, while also mentoring teams of at least 20 fraudsters in states like New Jersey and New York and one of 2020 swing states, Pennsylvania.

He was also allegedly in charge of rigging municipal and federal elections in Paterson, Atlantic City, Camden, Newark, Hoboken and Hudson County - qll in the US state of New Jersey.

“An election that is swayed by 500 votes, 1,000 votes — it can make a difference,” the insider told New York Post. “It could be enough to flip states.”

Claiming to be driven by an urge to disclose the techniques so that states are able to fix security problems with mail ballots, the insider claims that "if they knew how the sausage was made, they could fix it".

How to Get Away With Election Rigging

One of the ways to rig the election by mail is using fake polls, since they are not protected in any way. The only secured thing, according to the fraudster, is a return envelope, so the insider had his operatives collecting them from real people, suggesting "public services". The envelopes then were held over boiling water so that the glue loosens, a fake ballot went in and the envelope was resealed.

“Five minutes per ballot tops,” said the insider, noting that it was crucial to then spread the fake ballots in the different mailboxes around the city so that it is not suspicious. Citing an incident when 900 counterfeit ballots were placed in just three mailboxes, he added: "If they had spread them in all different mailboxes, nothing would have happened".

Another technique involves postal service employees who would join the scam.

“You have a postman who is a rabid anti-Trump guy and he’s working in Bedminster or some Republican stronghold … He can take those [filled-out] ballots, and knowing 95% are going to a Republican, he can just throw those in the garbage", the unnamed fraudster suggested, according to a report.

© AP Photo / Matt Rourke
In this May 28, 2020, file photo a voter casts her mail-in ballot at in a drop box in West Chester, Pa., prior to the primary election. Just over four months before Election Day, President Donald Trump is escalating his efforts to delegitimize the upcoming presidential election

His team members also used to intrude into nursing homes and offer "help" in filling out the ballots to those who were not able to do it themselves but wanted to feel "relevant".

“There are nursing homes where the nurse is actually a paid operative. And they go room by room by room to these old people who still want to feel like they’re relevant,” the rigger explained. “[They] literally fill it out for them.”

One more way to fix an election - this time not related to mail-in voting - is to impersonate a registered voter who would go and vote in a polling stations where a voter ID is not required - a practice that was common on a time in states like New Jersey, New York and Pennsylvania. Using the publicly available lists of voters who skip elections, the teams would steal identities and vote instead of them.

“You fill out these index cards with that person’s name and district and you go around the city and say, ‘You’re going to be him, you’re going to be him”. At the polling place, the fake voter would sign in, “get on line and … vote", the insider said.

“They get to register where they live in and they go to the polls and vote,” he said, claiming that former New York Mayor Mike Bloomberg paid roughly $174 per vote in order to secure a third mayoral term.

According to Hans von Spakovsky, a senior legal fellow at the conservative Heritage Foundation who manages the right wing think tank's election law reform initiatives, the techniques are not innovative and “everything he [the insider] is talking about is perfectly possible", cited by New York Post.

Voting by mail has been actively promoted by Democrats as a safe option to vote in the presidential election within the conditions of the ongoing COVID-19 pandemic. The idea has met with no enthusiasm from US President Donald Trump, who slammed it as potentially leading to election fraud.

In what was denounced by Democrats as an attempt to "sabotage" mail-in voting, Trump did not provide coronavirus financial aid to the United States Postal Service (USPS). The agency then warned state election officials of possible delays in mail delivery in the election period, citing a lack of funds and issues over the reforms in Postal Service applied recently by a new Trump-appointed boss.

All members of the US House of Representatives, including the Democrats, headed by US Speaker of the House Nancy Pelosi, were quick to return from their vacation period to initiate a hearing involving US Postmaster General Louis DeJoy, who denied the allegations that the Trump administration is trying to sabotage voting by mail. DeJoy also announced that reforms instigated earlier would be suspended until the election is over.

Amid the uproar over USPS changes, a CNBC/Change Research poll suggested on 26 August that fewer Americans are planning to cast a vote by mail than two weeks ago. Nationally, 36 percent of likely voters who answered the questionnaire said they would use the mail-in balloting to vote.

The share of Democrats who participated in the poll who plan to do so, fell by 11 percentage point to 51 percent.