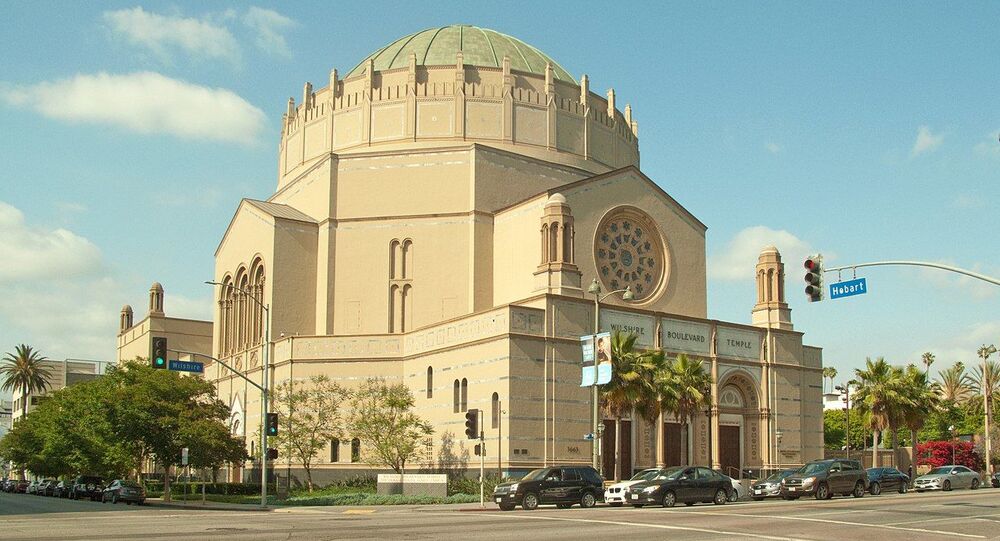 2020 Race, COVID & BLM Protests: This is Time of Great Unease for US Jewish Community, Rabbi Says

The Jewish community in California and elsewhere in the US feels unease due to the coronavirus pandemic’s burden, social polarisation amid the 2020 presidential race, and the Black Lives Matter protests, which have posed a great challenge for Jews, says Rabbi Abraham Cooper, commenting on a recent anti-Semitic incident in Los Angeles.

On 22 August, an anti-Semitic message placed on three banners saying "Honk if you know", "the Jews want a race war", and "GoyimTV.com" was spotted hanging on the overpass of the 405 Freeway in Los Angeles.

Shortly after the incident, the Anti-Defamation League Los Angeles, a leading international anti-hate organisation founded in the US in 1913, tweeted that it had been working closely with law enforcement to identify the perpetrators.

We're aware of the #antisemitic banner drops from over the weekend on the 405 Fwy. We've been working closely with law enforcement to identify the perpetrators. We want to thank community members for contacting us & continue to encourage reporting. Los Angeles is #NoPlaceforHate. pic.twitter.com/V6qiEbcsD7

​"In the last few days people around the world heard about an anti-Semitic incident in which anti-Jewish slogans were displayed over a major freeway where hundreds of thousands of people perhaps could have seen it, and the individual involved from another part of California, a known anti-Semite, proud anti-Semite, who's boasted about his deed", says Rabbi Abraham Cooper, associate dean and director of the Global Social Action Agenda of the Simon Wiesenthal Centre, California.

Rabbi Cooper recollects that after the hateful signs were spotted, he and his counterparts contacted Los Angeles officials, "and within a relatively short period of time it had been removed".

"Nonetheless, it is extremely distressing to see the overt public display of Jew hatred manifest in so many different ways in this time of great, I would say, unease and concern not only in Los Angeles and the United States, but across the world because of the pandemic", he emphasises.

Petaluma resident Jon Minadeo Jr., 37, who runs the site Goyim TV, and his associates, known as the Goyim Defence League, were apparently behind the signs, according to The Jewish News of Northern California (J.). Still, it was not a standalone action as, according to the footage posted on the video-sharing site GoyimTV, Minadeo and his crew were driving around Los Angeles over the weekend and shouting anti-Semitic slurs through a megaphone. While GoyimTV has been removed from the Internet since then, it had hundreds of followers and thousands of video views, according to J.

Last year Minadeo was linked to the dissemination of hateful flyers in Santa Rosa, California. On 6 August 2019, the “Handsome Truth 5” YouTube channel posted a series of videos featuring a man putting up flyers titled “Are Jews responsible for 9/11?” and bragging about it.

The rabbi laments the fact that while the Wiesenthal Centre, a leading Jewish human rights organisation, remains in lockdown, "the anti-Semites have not taken a holiday". He points out that hate groups hack Zoom calls during Jewish religious studies or religious worship and post horrific and pornographic materials. Anti-Semites have even gone so far as to blame the Jewish people for the coronavirus outbreak and accuse Israel of being the mastermind behind the pandemic and seeking revenues for an anti-COVID vaccine.

"So, [they are] using the horrific anti-Semitic stereotypes, updating it to the current situation, repeating the big lie and denigrating the Jewish community", he underscores.

© Photo : JTA-Twitter-Siamak Kordestani
A sign with the phrase “The Jews Want A Race War” was hung from a Los Angeles interstate 405 highway overpass on Aug. 22

The COVID pandemic and nationwide protests triggered by the death of George Floyd in police custody have affected the Jewish community in the United States and particularly in Los Angeles, according to Rabbi Cooper.

"We had, of course, the demonstrations across the United States targeting police, Black Lives Matter (BLM) organisation coming to the fore, that's a group that has its roots in extreme anti-Israel and some anti-Semitic leanings, which also creates a challenge for us", the Jewish scholar underscores.

He draws attention to the fact that the first Black Lives Matter demonstration kicked off on a Saturday afternoon, which coincided with the Jewish festival of Shavuot. "After the formal demonstration was over, marches began, and so did the violence and the looting", the rabbi recalls, adding that at least two synagogues in the Los Angeles area were targeted with pro-Palestinian and anti-Semitic graffiti.

"There was an indication that some visibly Jewish-owned businesses were targeted while others were not in some areas", he remarks. "That has put the Jewish community tremendously at unease".

The decision of the Los Angeles City Council to cut the police budget has complicated matters further, according to Rabbi Cooper: while Jews are going to celebrate their major holidays – Rosh Hashanah, the Jewish New Year, and Yom Kippur – in September, he is concerned whether law enforcement authorities will be capable of ensuring security on the ground.

"We are trying to work with the police in order to make sure that our community and our institutions will remain safe", he notes.

However, as California Governor Gavin Newsom ordered to shut places of worship down again in July, following a temporary easing of coronavirus restrictions, synagogues remain closed

"We can't get into our houses of worship, we have many outdoor quorums, so a highly unusual and difficult time for people of faith - Jews, Christians, and others", the Jewish scholar admits.

"Overall, this situation reminds me of what Simon Wiesenthal, the famous Nazi hunter, said many, many decades ago", Rabbi Cooper points out. "He said 'Where democracy is strong, it's good for Jews, and where it's weak, it's bad for Jews'. And right now, our democratic values are under assault".

According to the rabbi, the US is witnessing "a very contentious, unprecedented type of presidential campaign" between President Donald Trump and his Democratic rival Joe Biden, which "has kept the temperature elevated" with extremists from both sides of the political spectrum and Islamists jumping at the opportunity to sow discord.

He notes that not only synagogues but also Christian churches have become targets for rioters and extremists: "In recent weeks we had the situation where a Chabad House in Portland, Oregon, a site of nightly riots, was recently put on fire with damage", the rabbi notes. "And now with the University of Delaware Chabad – Delaware is the home state of Vice President Biden – their Chabad House suffered fire damage as well".

Anti-Semitic hate crimes in California soared nearly 12% in 2019, according to a state report released in July 2020. On 27 April 2019, nursing student John T. Earnest, 19, opened fire during a Passover service at the Chabad of Poway, San Diego, killing 60 year-old Lori Gilbert-Kaye and injuring three others, including an 8-year-old girl and the rabbi.

"This is a time of great unease but also of great resolve that the good people of the United States and our democratic system and values will ultimately triumph over extremists", Rabbi Cooper concludes.