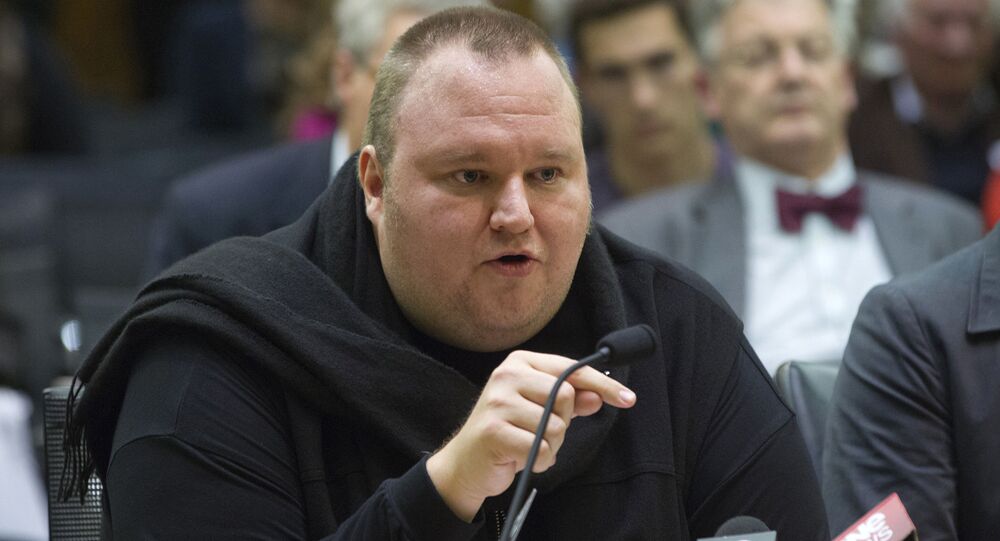 Kim Dotcom Calls on Trump to Pardon 'Truth-Teller' Julian Assange, Says It Will Help His Re-Election

Convicted of wire fraud, copyright infringement and money laundering, the entrepreneur awaits extradition to the US. In the meantime, he has thrown his weight over to the fight for Julian Assange, the WikiLeaks founder and publisher who is fighting Washington's attempts to extradite him from the UK to the US for trial.

Kim Schmitz, primarily known by his nickname as the founder of the Megaupload file hosting service 'Kim Dotcom', has tweeted at US President Donald Trump, suggesting that he pardon WikiLeaks founder Julian Assange. Dotcom insisted that Assange is only a truth-teller, arguing that "truth should never be a crime" in a bid to sway POTUS on the matter of refusing the whistleblower's extradition from the UK.

Please #PardonJulianAssange. He is a truth-teller and telling the truth should never be a crime.

Dotcom hit Trump's main agenda by suggesting that, by pardoning Assange, POTUS would win many new votes in the upcoming US presidential election, from those who support the whistleblower and his cause. In order to drive the point home to the president, Schmitz called on Twitterians to bombard Trump's tweets with the #PardonJulianAssange hashtag.

Trump has an important decision to make. Will he pander to the intelligence community and continue to persecute truth-teller Julian Assange. Or will he unlock the much larger electorate of truth seekers who will vote for Trump if he is kind to Julian Assange? #PardonJulianAssange

The entrepreneur, currently residing in New Zealand, is also fighting extradition to the US, filing his "final appeal" in June 2019 after several unsuccessful attempts to stop the process. He is wanted in the United States, which has been accused of illegally raiding his commercially successful business, on charges of wire fraud.

© Photo : No Extradition Film
Over 150 Lawyers 'Condemn' Denial of Julian Assange's 'Right to a Fair Trial' in Open Letter

Assange is sought by Washington for trial over his involvement in the leaking of US Iraqi and Afghan war logs, along with classified Department of State wires. The whistleblower had been hiding from American authorities for several years in the Ecuador embassy in London, but was expelled last year, landing in a British prison over breaching the conditions of his bail. Assange is now fighting US government attempts to extradite him from the UK.