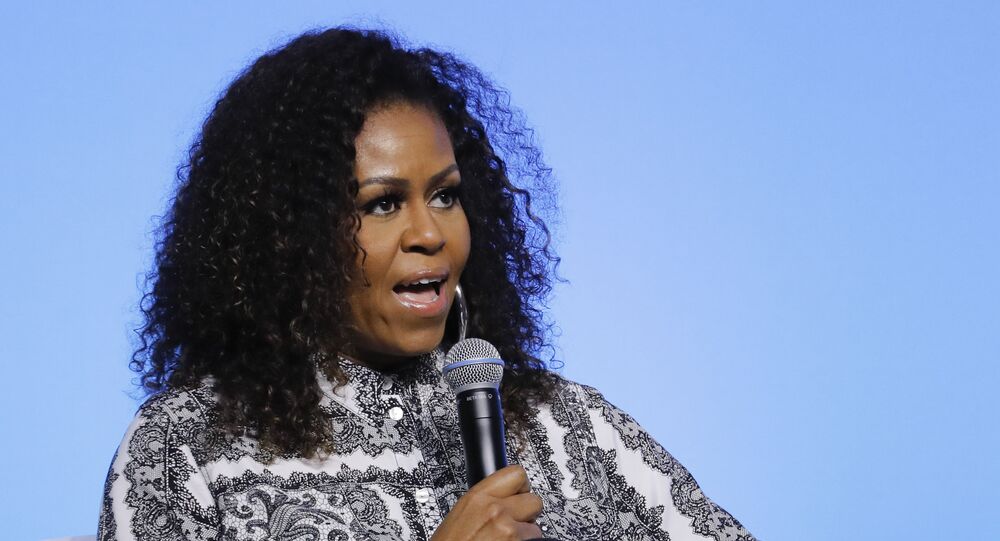 Civil unrest in Kenosha resulted in arsons and looting after African-American man Jacob Blake was shot by a police officer at least seven times as Blake tried to break up a fight between two women in the city on 23 August.

Former US First Lady Michelle Obama has admitted that she was “devastated” by the recent shooting of Black man Jacob Blake in Kenosha, Wisconsin, but remained tight-lipped on the violence that hit the city.

She took to Twitter on Friday to bemoan the fact that American kids are seeing systemic racism every day, adding that “sometimes they see it from the back seat of a car” – in an apparent nod to Jacob Blake’s children watching their father be shot by police at least seven times.

I’m just devastated by the shootings in Kenosha. And I can’t stop thinking about what our kids are seeing every day—and our obligations to them going forward.

To find out how you can take action, check out the @ObamaFoundation's resources at https://t.co/gyOVs4Nxyb. pic.twitter.com/0CWfNj2ncL

Obama tweeted that she was "exhausted and frustrated", and that she sees "glimmers of something different" when she looks at the "swift and powerful protests that have risen up around the country”.

According to her, the protests are "opening eyes, rattling consciences and reminding people of all backgrounds that this problem" will not be resolved unless "we all make a change”.

“I want to encourage you all to keep using your bullhorns and your ballots to reform policies in our cities and our neighborhoods”, the ex-US First Lady concluded.

The comments come a few days after the US Department of Justice (DOJ) said in a statement that it had opened a civil rights probe into the shooting of Blake, who currently remains in hospital in serious condition.

© REUTERS / REVOLUTION CLUB CHICAGO
People stand near a burning vehicle in front of the Kenosha County couthouse in Kenosha, Wisconsin, U.S., during protests following the police shooting of Black man Jacob Blake in this August 24, 2020 picture obtained from social media

The statement also pointed out that "federal law enforcement is joined with state and local authorities to address further violence in Kenosha and beyond".

The civil unrest in the city was followed by arsons and looting, with two people killed after a rifle-wielding 17-year-old boy opened fire on the streets of Kenosha during the riots.

​Wisconsin Governor Tony Evers declared a state of emergency on Tuesday night, increasing the number of the National Guard deployment in the city from 125 to 250. President Donald Trump, for his part, insisted that there has been no further violence since the National Guard moved into Kenosha.

© REUTERS / BRENDAN MCDERMID
WH: Almost 1,000 National Guard Troops, 200 Fed Agents Deployed to Wisconsin Amid Kenosha Protests
On 23 August, Blake was shot by a Kenosha police officer in front of three of the man's children after police arrived at the scene, where he was trying to break up a fight between two women.

The incident followed months-long protests in the US that erupted in May, when African-American man George Floyd died after police in the city of Minneapolis knelt on his neck for over eight minutes. Some of the protests turned into violent riots, with looting and clashes with law enforcement.