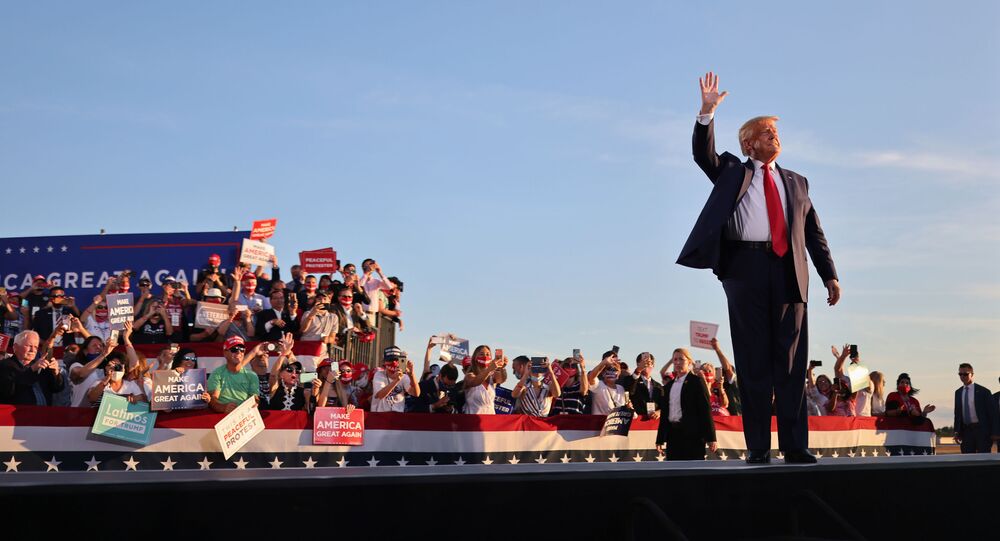 US President Donald Trump told attendees of his Manchester-Boston Regional Airport rally that he does not "want to lose to a low-IQ individual" such as "Sleepy Joe," former Vice President and Democratic presidential nominee Joe Biden.

"China would own our country if Joe Biden got elected," Trump said on Friday at his first public address since the conclusion of the Republican National Convention (RNC) the day prior.

"Joe Biden's agenda is made in China. Mine is made in America," he said, some 30 minutes into his speech on Friday. "We are finally putting America first."

Trump also claimed that 300 miles of border wall have been constructed on the southern border of the US and that 10 additional miles are being added each week.

"And by the way, you know, Mexico is paying for the wall, just in case you didn't know that," he asserted to a cheering crowd.

'What a Beauty': US President Attacks Democratic VP Pick

Trump continued to attack the former vice president as the night went on, referring to Biden as "a guy who is against oil, gas and God."

He also criticized Biden's running mate, Sen. Kamala Harris (D-CA), declaring that if someone were seeking to infiltrate and destroy America from within, "all they have to look is at the Biden-Harris - look at her, isn't she a beauty? What a beauty that is."

Trump then began to recount Harris' performance during the Democratic presidential primary, claiming she "was terrible," during the contest.

Trump also took time to comment on authorities that were defending Sen. Rand Paul (R-KY) after he and his wife were confronted by demonstrators following the RNC.

"My wife Kelley and I were attempting to leave the White House event. We were staying at a hotel directly across the street, maybe 50 yards from the gates of the White House. But as we went to leave, it became apparent there was no safe exit out the gates and through the unruly mob that had gathered there," Paul claimed in a Friday Fox News op-ed.

"The mayor should be ashamed for that kind of display of incompetence," Trump told supporters at his New Hampshire rally Friday. "It's happening all over when you have Democrat-run cities."

WATCH: Protesters confronted Kentucky Senator Rand Paul after attending the RNC at the White House, shouting at the lawmaker to acknowledge the shooting of Breonna Taylor https://t.co/JmxvZJy29u pic.twitter.com/tTONwewPcR

Demonstrators chanting "No Justice, No Peace" and "Say Her Name" can be overheard in the background of the video.

'She Would've Been Alive Under Trump Admin': Parents of Activist Kidnapped by Daesh Lambast Obama