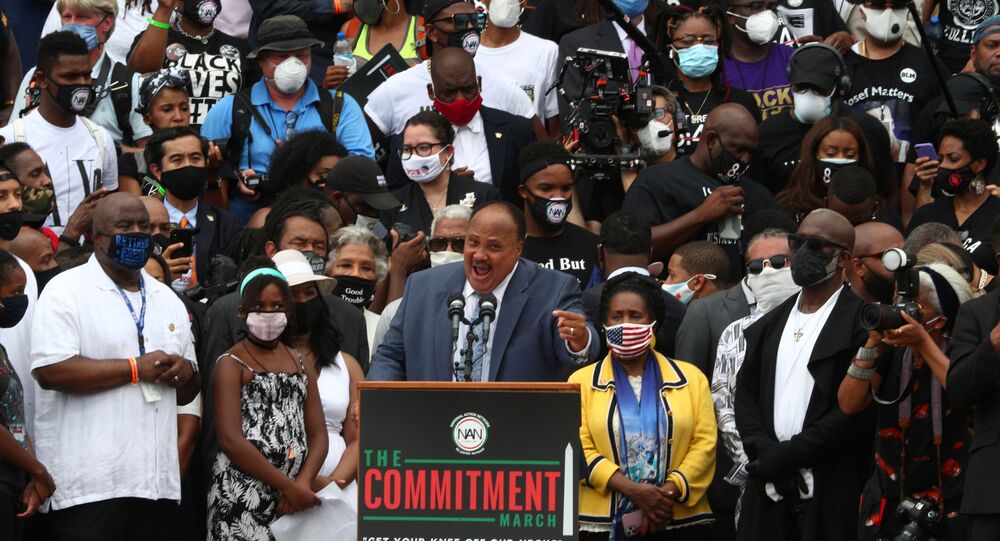 WASHINGTON (Sputnik) - Thousands took to the streets of Washington, DC on Friday to root for racial justice and draw a direct ancestry line from the Black Lives Matter movement to epic struggles in the past against slavery and segregation in America.

The rally, timed to the 57th anniversary of the March on Washington, is held in front of the memorial to Abraham Lincoln - the US president who abolished slavery - at an exact place where Martin Luther King delivered his historic "I Have a Dream" speech in 1963.

The event comes three months since the death of African American man George Floyd in police custody in Minneapolis sparked a nationwide campaign against police brutality and systemic racism.

"In so many ways we stand together today in the symbolic shadow of the history, but we are making history together right now. We are marching with the largest and most active multigenerational and multiracial movement for civil rights since the 1960s", Martin Luther King’s son, Martin Luther King III, told the audience.

Martin Luther King III has arrived in the media area. It was 57 years ago today his father gave the “I Have a Dream” speech from here at the Lincoln Memorial. #CommitmentMarch #ABC7March pic.twitter.com/xllrrg5TfF

Though the initial permit estimated a turnout of 100,000 people, there were visibly fewer participants though still in tens of thousands. Organizers urged protesters from the localities with high novel coronavirus rates to hold "satellite rallies” instead of traveling to Washington, DC, which mandates a 14-day quarantine for such visitors.

"We are courageous, but conscious of our health. We are socially distanced, but spiritually united. We are masking our faces, but not our faith and freedom. We are taking our struggle to the streets and social media," Martin Luther King III said. "The nation has never seen such a mighty modern-day incarnation of what my farther called a coalition of freedom."

© Sputnik / Artur Gabdrakhmanov
Participants of a rally commemorating the 57th anniversary of the March on Washington flock to the square in front of the Abraham Lincoln Memorial in Washington DC.

The march is led by the relatives of George Floyd, Breonna Taylor, Eric Garner, Trayvon Martin and other African Americans killed by law enforcement, who also addressed the audience.

"Black America, I hold you accountable. You must stand, you must fight, but not with violence and chaos. With self-love", said a sister of Jacob Blake, an unarmed Black man, shot in the back seven times by a policeman in Kenosha, Wisconsin, last Sunday.

Speaking before thousands, Martin Luther King III details what’s at stake ahead of the November election. “We must march to the ballot boxes.” He’s speaking 57 years after his father Martin Luther King Jr. delivered his famous ‘I Have a Dream’ speech. pic.twitter.com/yi0SsQvWwb

​Reverend Al Sharpton addressed the audience by saying African Americans are tired of the mistreatment and the violence they have been subjected to for hundreds of years.

"Like those who marched before us, we are standing up and telling the police, telling lawmakers, telling the people and systems that have kept us down for years, 'Get your knee off our necks,'" Sharpton said.

The Black Lives Matter movement has become a major issue in the 2020 US Presidential campaign with the Democratic opposition seen as more sympathetic to protesters’ demands while their Republican rivals, including Trump, prefer to focus on the need to counter an upsurge of violence which often tarnishes the movement.

© Sputnik / Artur Gabdrakhmanov
A participant of the rally commemorating the 57th anniversary of the March on Washington is seen holding a Black Lives Matter flag in front of the Washington Monument.

Kamala Harris, Democratic vice-presidential nominee, spoke to the participants of the rally in a recorded video.

“If we work together to challenge every instinct our nation has to return to the status quo… we have an opportunity to make history, right here and right now," Harris said.

Speakers at the rally advocated electoral activism, urging everyone to vote "like we never voted before," including mailing-in ballots and assisting neighbors in coming to polling stations on election day.

"We need to raise our voices and cast our votes. Over the weeks ahead culminating on election day we need to vote as if our lives, our liberties, our livelihoods depend on it. Because they do," Martin Luther King III said.

A participant who identified as Murry told Sputnik that he brought his entire family from Chicago to witness history and be part of it.

“I was only 13-14 years old in 1963 and my family couldn’t afford [to come to Martin Luther King’s rally]. Now I can and I want my wife, my daughter, my granddaughter to see this connection,” Murry said. “It means a lot to us, Black people. My dad and my mom encountered this discrimination, I saw it too to a certain extent.”

Kendrick, a young African-American from Washington, DC, said he came to the rally in a t-shirt featuring a portrait of Raoul Wallenberg, the Swedish diplomat who saved thousands Jews in Nazi-allied Hungary during World War II. Kendrick said he believes that Wallenberg’s story, though unfamiliar to most protesters, fits into the Black Lives Matter code of ethics and may serve as a role model.

“Since a lot of people don’t know who he is, they ask and I am telling them. I didn’t know that either. I listened to a particular podcast and actually bought this t-shirt from them,” Kendrick said. “On the back it says ‘Do crimes, save lives.’ It’s about doing sometimes to break the rules to save lives.”

© Sputnik / Artur Gabdrakhmanov
A photo of Kendrick, a young African-American from Washington, DC, who came to the rally in a t-shirt featuring a portrait of Raoul Wallenberg, the Swedish diplomat who saved thousands Jews in Nazi-allied Hungary during World War II

Several hours after the speeches at the Lincoln memorial, the participants moved to the nearby Martin Luther King memorial. A relatively small group separated to demonstrate next to the US Department of Justice.

Organisers say that the march is planned as a peaceful one and to this end, they cooperate with the authorities and employ marshals trained in "de-escalation tactics".

"We... do not intend to engage in any civil disobedience. We expect all marchers to abide by all laws and any instruction of law enforcement", they urged.

Police in plain uniforms are patrolling the adjacent streets and have closed them for traffic. No violent incidents occurred so far.

Washington, DC Police Chief Peter Newsham described the event as “very peaceful” and the mood as “very positive,” media reported. Emergency services say they are dealing with mainly heat-related issues, but in alarmingly high numbers. As of 4:00 p.m. para-medics treated 106 patients and eight of them were taken to local hospitals.