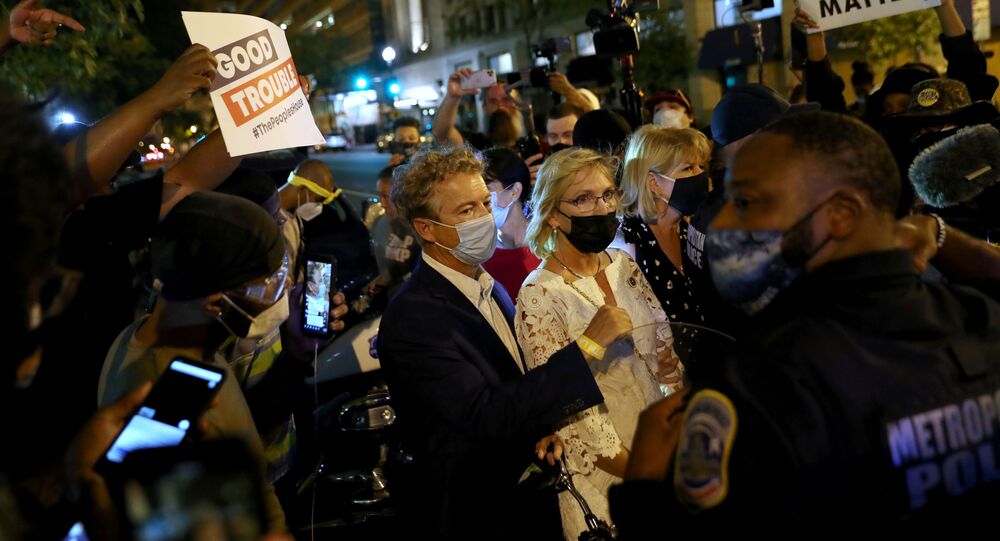 Ironically, the mob harassed the senator over the death of Breonna Taylor in whose name Paul named a bill, designed to ban the use of a no-knock warrant, which purportedly led to the killing of the African American woman during a police raid.

Kentucky Senator Rand Paul has shared via his Twitter that he and his wife, Kelley Paul, were "attacked by an angry mob of over 100" as they were returning to their hotel after hearing President Donald Trump's speech at the White House for the RNC. The senator noted that he and his wife were "literally" saved from a "crazed mob" by DC police, who escorted the politician to where he was going.

Just got attacked by an angry mob of over 100, one block away from the White House. Thank you to @DCPoliceDept for literally saving our lives from a crazed mob.

Videos of the encounter later emerged online, showing Paul being closely followed by a group of people chanting the name of Breonna Taylor, as well as phrases "say her name" and "no justice, no peace". The senator was surrounded by metropolitan police officers, one of whom at some point was shoved by a protester, nearly losing his balance with Paul seemingly helping him to stay on his feet.

Rand Paul just got chased by a crowd back to his hotel, after leaving the White House from Trump’s Republican Party Nomination #DC #DCProtests pic.twitter.com/h1kPcZG1jh

It is unclear why the protesters specifically picked on Rand Paul, since he was the lone Republican to introduce a bill named after Breonna Taylor seeking to prevent the tragedy that happened to her from taking place in the US again. The bill proposes a ban on so-called no-knock warrants, which allow police officers to enter a private property without announcing their intention or authority in advance. The same warrant was used, when several plainclothes Louisville police officers entered Taylor's house over her alleged connections to a local illegal drug selling operation.

After officers rammed the house door open, gunfire ensued between police and Taylor's boyfriend, Kenneth Walker, also linked to the drug operation, resulting in Taylor being shot dead. Walker later claimed that law enforcement did not announce themselves upon entry, despite officers saying otherwise. The incident, along with another, the death of George Floyd in Minneapolis police custody, spurred a spate of protests against alleged systematic racism in the ranks of American police, which have been rocking the US since the end of May and often turning into violent riots.