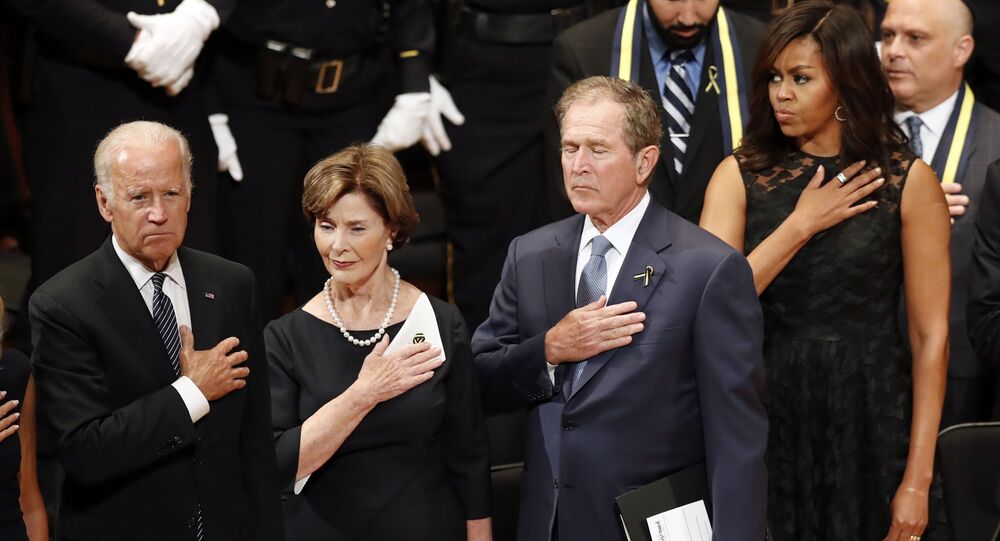 Despite openly acknowledging severe differences in political outlook with the Democrats, the GOP alumni claimed they would rather give more weight to kicking President Trump out of office. POTUS’s campaign spokesman hit back at that, arguing that "the Swamp creatures", who were at some point in power, had gathered "to protect one of their own".

All three alumni groups have issued statements lambasting Trump and calling out his spats with their former conservative bosses. McCain’s team -  ranging from junior aides to chiefs of staff - wrote, recalling their previous experience and long-standing principles, as well as confirming their unconditional support for Biden:

"Working for John McCain was an honour, and his example of public service remains a lasting influence on us. His motto, 'country first', and his frequent call on Americans to serve causes greater than our self-interest were not empty slogans like so much of our politics today. They were the creed by which he lived and he urged us to do the same. It is in that spirit that we are supporting his friend, Joe Biden".

Speaking to The New York Times, Mark Salter, McCain's longtime chief aide, who helped with the effort, claimed it is purely anti-Trump, suggesting that removing Trump from office was more of a priority for the group than differences they had with Biden or the Dems at large.

"We have different views of Joe Biden and the Democratic Party platform — most of us will disagree with a fair amount of it — but we all agree that getting Donald Trump out of office is clearly in the national interest", he said.

McCain and Trump, although both Republicans, had been in a spat over the last few years of McCain's life: the feud started during the 2016 primaries, but continued well into the president's first term. Trump was even excluded from McCain's funeral in 2018, though Vice President Pence was invited to take the floor at the time.

Biden and McCain, meanwhile, were known to be friends for decades, and their warm relationship reached well beyond the Senate, a NYT report has it.

The Romney campaign alumni, for their part, fought against Biden in the 2008 and 2012 elections, when he ran with Barack Obama.

But now, a group of 34 former Romney staffers are backing "a man we once worked to defeat". The group also took a dig at Trump's handling of the coronavirus pandemic, saying "we desperately need a president that's laser focused on putting the nation's needs ahead of his own". The group, in common with the McCain folks, reiterated the differences they have with the Democrats, contending though that they are not vital.

"Of course, we don't agree with Joe Biden on every policy. That's OK. The differences in our political perspectives come from places of honest disagreement and genuine concern. That's the beauty of America", they said.

The letter, first obtained by Politico, touts Biden's personal traits of character and his ability to propel the country out of the coronavirus-induced crisis:

"We need Joe Biden to restore character, integrity, and decency to the White House. These principles are the cornerstone needed to rebuild a dignified, secure, resilient country", the alumni group wrote.

The statements, however, appear to have hardly surprised the Trump team. Commenting on the endorsements, Trump campaign spokesperson Tim Murtaugh called Biden "a failure in the Washington Swamp for a half century" when speaking to the New York Post: "so no one should be surprised when Swamp creatures gather to protect one of their own", he went on praising what he sees as Trump's "record of success":