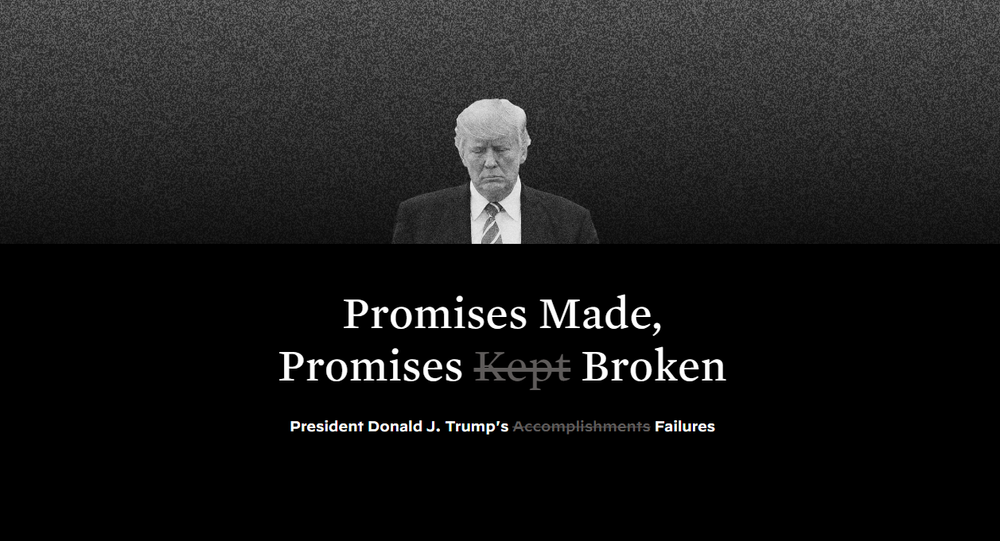 Finalizing a wave of trolling the Republicans during their national convention week, the Biden campaign team has quietly registered the web address KeepAmericaGreat.com, in a move to subvert the Trump re-election slogan.

Shortly before the finale of the Republican National Convention, where US President Donald Trump is expected to deliver his acceptance speech, Democratic candidate Joe Biden rolled out an icing on the cake to sweeten Democratic criticism of the RNC under the hashtag #TrumpChaos.

Revealing that his campaign acquired the web domain KeepAmericaGreat.com, Biden tweeted a link to the website that dismisses Trump's "promises", referring to them instead as "failures".

"As he takes the stage tonight, remember: he alone is responsible for the chaos in our country", Biden said, inviting all to visit the website attacking the Trump re-election campaign.

As he takes the stage tonight, remember: he alone is responsible for the chaos in our country.

Together, we can stop it. https://t.co/iKcrLuEC9N

​On a website headlined "Promises Made Promises Kept Broken", the Biden campaign took shots at several instances in which Trump has touted achievements, including the economy, the job market, his coronavirus response as well as healthcare, justice, foreign policy and many other issues.

“You can buy all the domain names you want, but Joe Biden can’t ever buy a way out of his 47 years’ worth of failure in elected office,” Trump campaign spokesman Hogan Gidley stated, in commenting on the domain snag.

The move to snatch domain names is not new, however, as the Trump campaign conducted a similar attack last year on Biden, catching the moment to snag the latter's slogan targeting Hispanic voters "Todos con Biden". On the website created on the URL was written in both English and Spanish: "Oops, Joe forgot about Latinos. Joe is all talk".