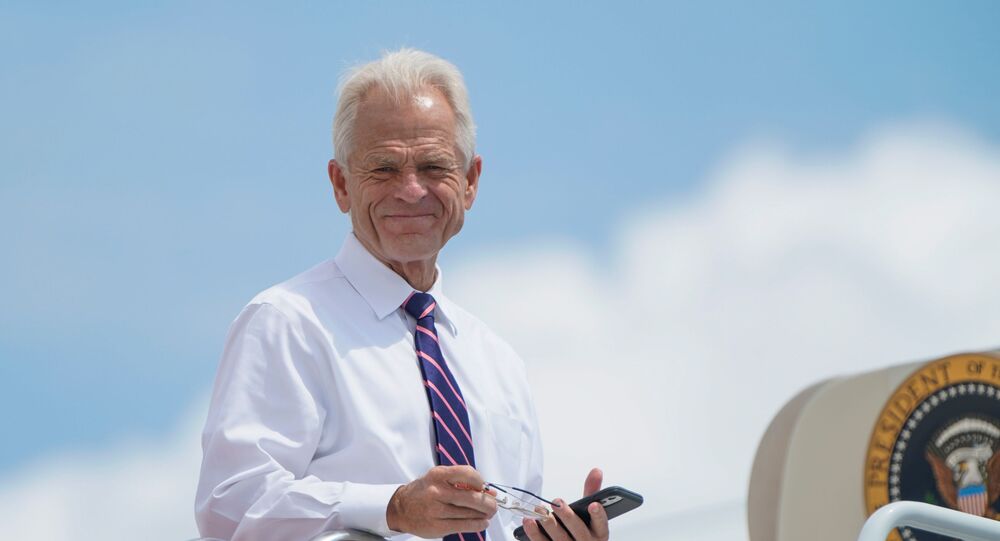 In an interview with CNN’s Jim Sciutto for a recently-published book, US President Donald Trump's appointed trade adviser, Peter Navarro, slammed Canada’s current policies toward the US, including what he characterized as “unfair” trade policies and Ottawa’s role in US-led multilateral NATO anti-terrorist operations in Afghanistan.

The US embassy chargé d’affaires, Richard Mills, responded to Navarro’s earlier remarks which had ignited disgust among Canadian officials, saying that the US “deeply values the service and sacrifice of our Canadian allies in support of the defense of freedom and global security.”

Mills, the US Deputy Chief of Mission in Canada, who claimed the post in November 2018, cited comments given by US Vice President Mike Pence during a 2019 visit to the nation in which he praised Ottawa's long-standing support to the US in “the defense of freedom for generations”.

“The United States and Canada have stood shoulder to shoulder in the defense of freedom for generations,” Pence said at the time. “Our ancestors fought side by side in the great conflicts of the 20th century. And in recent years, our armed forces have fought against the scourge of radical Islamic terrorism across the Middle East. And both of our nations have endured great sacrifice…The United States will always honor this alliance - this alliance for freedom. And we will always honor the sacrifice of soldiers of both of our nations.”

Statement by Chargé d’Affaires Richard Mills: The United States deeply values the service and sacrifice of our Canadian allies in support of the defense of freedom and global security. #FriendsPartnersAllies pic.twitter.com/xDnioCPYWQ

On Wednesday, the Canadian Broadcasting Corporation (CBC) reported, citing interviews Navarro gave to CNN’s Jim Sciutto for his new book ‘The Madman Theory: Trump Takes On the World’ which reviews Trump’s foreign policies, that Navarro rejected that Canada was doing the US “a favor” in its decade-long military presence in the war-torn country.

“Were they doing us a favor, or were they brought into the idea they needed to do that as part of the global effort against terrorists?” Navarro said in a recorded audio interview for the book, quoted by the CBC. “I mean, if they were just doing us a favor, maybe their government should have been thrown out of office. I mean, every time that a Canadian shows up in a uniform, it’s doing us a favor? How’s that work?”

Navarro also took a swipe at Canadian cross-border policies toward the US, accusing Ottawa of serving as a “way station” for Chinese products that would otherwise be subject to strict US tariffs.

“What’s good about Canada?” the Trump-appointed advisor said to book author Sciutto. “It’s like this blue-eyed brother kind of thing. It’s just Canada. It has its own national interests and self-interests.”

Former and current Canadian officials, including the country’s former chief of the defence staff, Rick Hillier; along with Canadian Defence Minister Harjit Sajjan, and Canada’s ambassador to the US, Kirsten Hillman, met Navarro’s criticism of Canada with anger.

Ex-chief of the defence staff Hillier, who was commander of the NATO Afghanistan mission in 2004, slammed the Trump aide as “an idiot” for his dismissal of the “service and sacrifice” of Canadians who stood “alongside our American battle brothers and sisters”.

“My first reaction, honestly, was, ‘What an idiot’”, Gen. Hillier said, quoted by CBC News. “I mean, even if you believe those things, I'm not sure why you would make them, or why you would disrespect the service and sacrifice in this spilling of blood and the loss of lives by Canada's sons and daughters who soldiered alongside our American battle brothers and sisters.”

The Canadian general also criticized the Trump-appointed trade advisor for speaking on matters that are not within his field, including military issues, pointing out Navarro’s partial responsibility for the “nastiness in the relationships around the world now internationally involving the United States of America.”

“First, I thought he must be a military genius and knew this stuff. Then I realize he's a trade adviser, so I'm not sure why he's commenting upon this,” the former top soldier said. “He obviously doesn't understand the Article 5 of NATO that an attack on one is an attack on all. We believed in that here in Canada. And that's why Canada stepped up to take part in that mission and try and make the world a better place.”

Canadian Defence Minister Sajjan said that Canadian servicemen and women stepped up to the plate when the neighbouring nation needed help and “made the ultimate sacrifice in the name of our collective peace and security”.

“When our friend and ally was attacked on 9/11, Canada was there for America that day and throughout the entire Afghanistan campaign. One hundred and sixty-one Canadians made the ultimate sacrifice in the name of our collective peace and security,” Sajjan said in a statement, cited by The Hill.

The minister pointed out that the Canadian military has supported the US in all battlegrounds around the world, “from the beaches of Normandy to the Korean peninsula and even now as we work together in our fight against Da'esh in the Middle East”.

Canada’s ambassador to Washington, Kirsten Hillman, denounced Navarro’s dismissal of the sacrifices of Canadian men and women in support of the US.

“You’ve left behind sons and daughters, husbands and wives, mothers and fathers, to stand by our US partners and allies around the world,” Hillman tweeted on Thursday. “Many of your brothers and sisters never returned. We remember your sacrifices. We’re grateful for your service, @CanadianForces.”

You’ve left behind sons and daughters, husbands and wives, mothers and fathers, to stand by our U.S. partners and allies around the world.

Many of your brothers and sisters never returned.

We remember your sacrifices.
We’re grateful for your service, @CanadianForces.

Navarro’s remarks have been met with widespread criticism by former and current officials in Washington, as well.

Among those denouncing the Trump trade advisor’s comments are former US Defence Secretary and CIA director in the Obama administration, Leon Panetta, along with former US Ambassador to Canada Bruce Heyman.

In an interview with CTV News, former White House Chief of Staff Panetta rejected Navarro’s opinions regarding the northern neighbour, arguing that Canada has been “in the foxhole” with the US and is a long-standing and trusted ally long before Trump presidency.

“As former US Ambassador to Canada I can say this. The US has no better friend, no better ally, no better partner than Canada. The language from Navarro is inappropriate, inaccurate and harmful to our bilateral relationship. Shame on him and those who allow him to say these things,” Heyman tweeted on Wednesday. “Several US generals told me on many occasions that if they were ever stuck in a foxhole they would want a Canadian by their side”.

As former US Ambassador to Canada I can say this. The US has no better friend, no better ally, no better partner than Canada. The language from Navarro is inappropriate, inaccurate and harmful to our bilateral relationship. Shame on him and those who allow him to say these things https://t.co/LYXRE4ThuQ

Canadian soldiers bravely fought alongside the US in Afghanistan. 150+ gave their lives defending our security.

On 9/11, Canadians opened their homes to countless stranded American travelers as US airspace was shut.

Formula 1 Says Cancels This Year's Stages in Brazil, US, Mexico, Canada Over COVID-19

Canada to Impose $2.7Bln in Reciprocal Tariffs Against US in 30 Days, Freeland Says