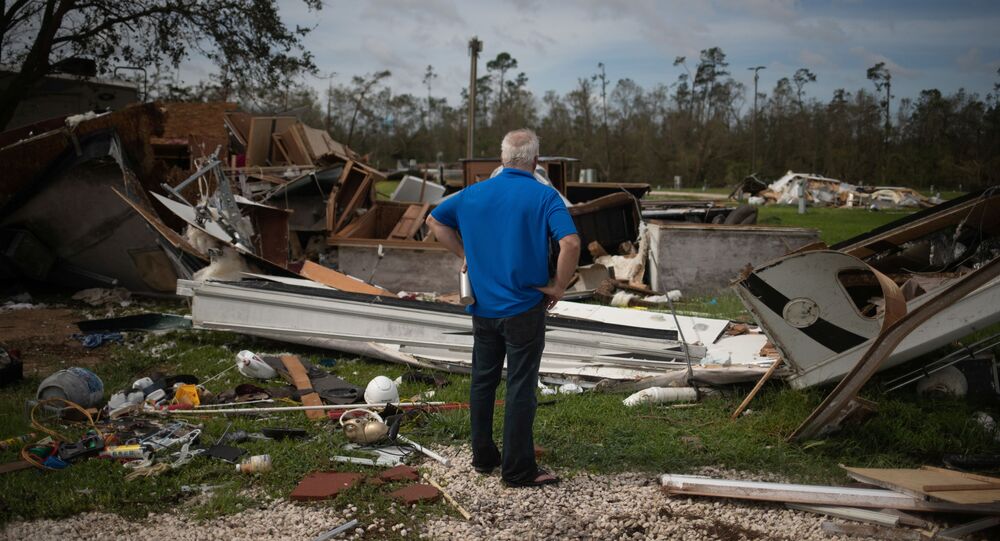 Hurricane Laura struck the US Gulf Coast early Thursday, leaving a path of devastation in its wake as it moved inland after making landfall in southwestern Louisiana near the coastal town of Cameron.

The US National Hurricane Center (NHC) indicated in its latest update that Laura was situated near Arcadia, Louisiana, and was moving northward at a pace of 15 mph.

Although Laura did initially make landfall as a Category 4 hurricane, the storm quickly weakened and has since been downgraded to a tropical storm after moving inland. At present, Laura has maximum sustained wind speeds of 65 mph, with tropical storm-level winds that will extend roughly 105 miles from the cyclone’s center.

Much of the footage shared on social media captured downed power lines and trees toppled over onto homes and businesses. According to utility service tracker PowerOutage.US, over 727,000 buildings have been struck with power outages due to Hurricane Laura.

Even the US National Weather Service’s Doppler radar in Lake Charles wasn’t able to weather the storm, ultimately being destroyed as Laura moved through the area.

Following Laura’s departure from the Lake Charles region, a fire broke out Thursday afternoon at a BioLab industrial chemical plant in nearby Westlake, Louisiana. According to a 2017 article from the Business & Industry Connection magazine, the facility produces chlorine-based products.

Video from the scene has shown thick smoke billowing across Interstate 10, which has since been shuttered temporarily by state officials. It’s unclear what caused the fire to break out at the site.

Elsewhere, in nearby Orange, Texas, buildings and power lines didn’t fare much better, and footage of Laura’s arrival to the town was just as intense.

​In one recorded instance, Justin Horne, a meteorologist with local news station KSAT, had a close call with a burst of electricity while he was in the middle of a report outdoors.

Though no one was hurt during the incident, it provided yet another reason to seek shelter during powerful storms.

Laura is anticipated to bring between 4 and 8 inches of rain across Louisiana, Mississippi and Arkansas, with isolated pockets being hit with roughly 18 inches of rain.

“This rainfall will continue to cause widespread flash and urban flooding, small streams and creeks to overflow their banks, and minor to moderate freshwater river flooding,” the NHC warned in its update. The agency noted that storm surge levels will subside “over the next few hours” along the US Gulf Coast.

The NHC forecasts that Laura will move over Arkansas throughout Thursday before moving onto the mid-Mississippi Valley and onto the Mid-Atlantic states by Saturday. It’s expected that Laura will weaken even further throughout the day into early Friday, eventually becoming a tropical depression.