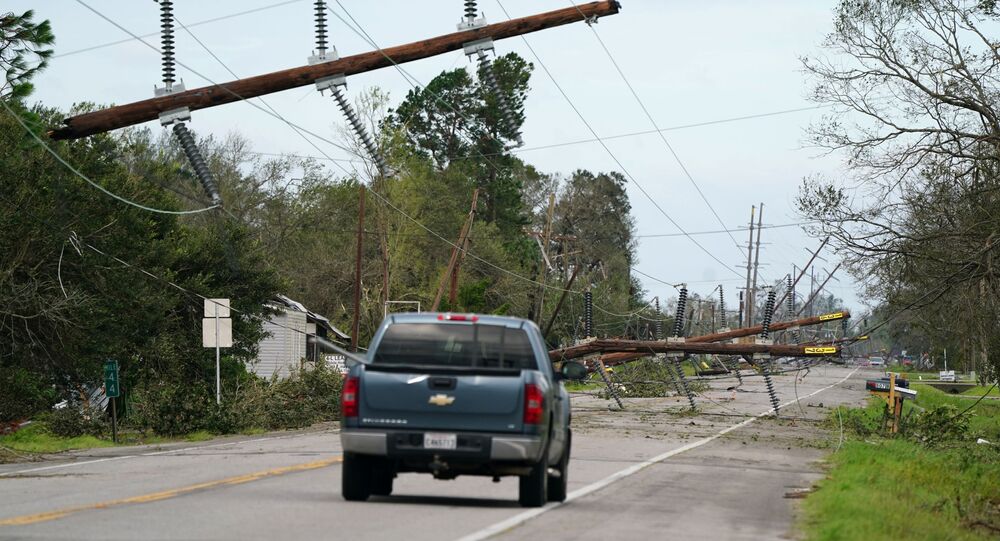 WASHINGTON (Sputnik) - President Donald Trump pledged a huge national effort to rescue victims of Hurricane Laura in addition to Washington’s backing for rebuilding and repair efforts to follow, as the storm moved inland over the states of Louisiana and Texas, the White House said in a statement on Thursday.

"President Trump is committed to deploying the full resources of the Federal Government to rescue those in distress, support those in the region affected and restore disruptions to our communities and infrastructure", the statement read.

The statement also warned residents to heed instructions from state and local officials in coping with storm hazards likely to persist long after the hurricane passes.

© REUTERS / KATHLEEN FLYNN
Category 4 Hurricane Laura Hits Southwest Louisiana - Videos
Hurricane Laura hit the Louisiana coast shortly after midnight local time (05:00 GMT) with winds in excess of 150 miles per hour. The category 4 storm was one of the strongest ever to make landfall along the US portion of the Gulf of Mexico. By late Thursday morning, Laura had weakened to a category 1 hurricane, the National Weather Service said.

Officials warned of a life-threatening storm surge in Laura’s wake that could spread up to 40 miles inland, causing flash floods, severe damage and power outages.

More than 1.5 million residents of the two US states had been ordered to evacuate and up to a half-million homes were without power as the storm headed inland, according to local media.