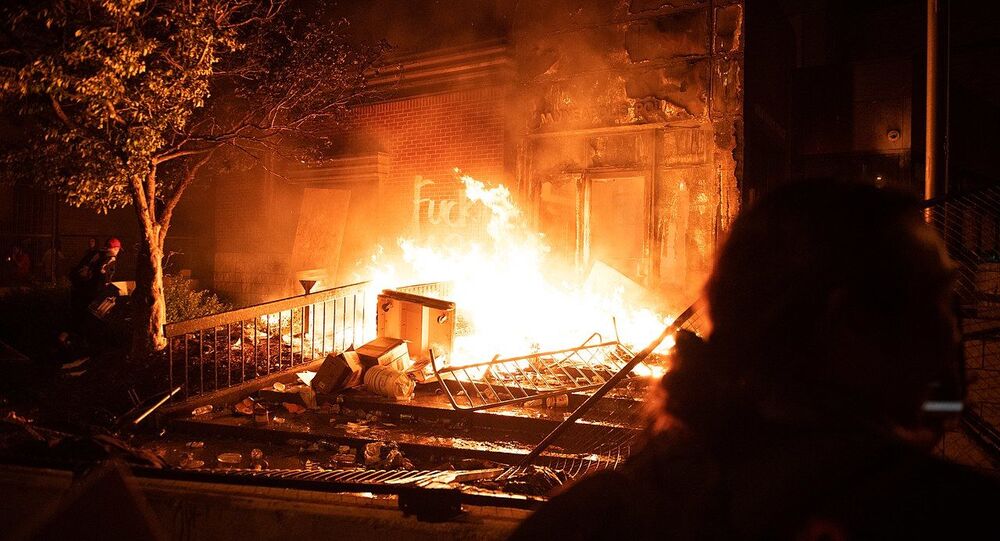 A new wave of looting came as the city is struggling to recover from riots that began at the end of May over the death of African American George Floyd in police custody. The US has been rocked by a series of protests, sometimes violent, since then with the most recent engulfing the city of Kenosha, Wisconsin.

Downtown Minneapolis has once again been hit by riots and looting after a false rumour spread that an African American resident had been shot dead by police on 26 August. Several videos, allegedly shot in the city's downtown area, surfaced online and show at least one mall being ransacked by protesters, many of whom concealed their faces.

Doesnt look locked down to me...

Looting is now taking place at the Nicollet Mall in Minneapolis after a man committed suicide while being pursued by police. Any excuse to riot. pic.twitter.com/LGVY7DVX6E

As police started arresting protesters, the city's mayor, Jacob Frey, called on the people to disperse, introducing a curfew and requesting help from the National Guard. He argued that such incidents only harm the process of dealing with racial inequality, purportedly present in the country.

"What we're calling for right now is peace. This destruction and property damage just takes away from that underlying goal", the mayor stated.

The violent demonstration took place even though police earlier dismissed the information about the black resident being killed by a police officer as fake. Minneapolis Police spokesman John Elder stated the death of the African American resident, who was a suspect in a fatal shooting that happened earlier the same day, was not related to the actions of law enforcement.

More looting in downtown Minneapolis. They’ve now breached the Saks 5th Avenue store on 6th and Nicollet and people are making out with lots of goods. pic.twitter.com/tgUIyoIMvf

The man fled the scene of the shooting, but was eventually found by the police. But as the officers approached the suspect, he drew a gun and fatally shot himself near Nicollet Mall in downtown Minneapolis. Police later published a graphic video of the whole incident to disperse fake rumours of police involvement in the suspect's death, but the riots took place nonetheless.

The man's death and subsequent protests and looting came as the city is struggling to recover after months-long riots caused by the death of another African American, George Floyd. Floyd died in police custody after officers were called over the former allegedly using a counterfeit bill. After Floyd resisted getting into a police car, one of the officers pinned him down to the ground placing his knees on the man's neck and back, which led to him suffocating to death. Floyd's killing resonated through African American communities across the country, leading to nationwide protests that often turned violent. While the White House tried to quell them using the National Guard and the forces from the Department of Homeland Security, these measures faced opposition from some Democratic mayors of the affected cities.