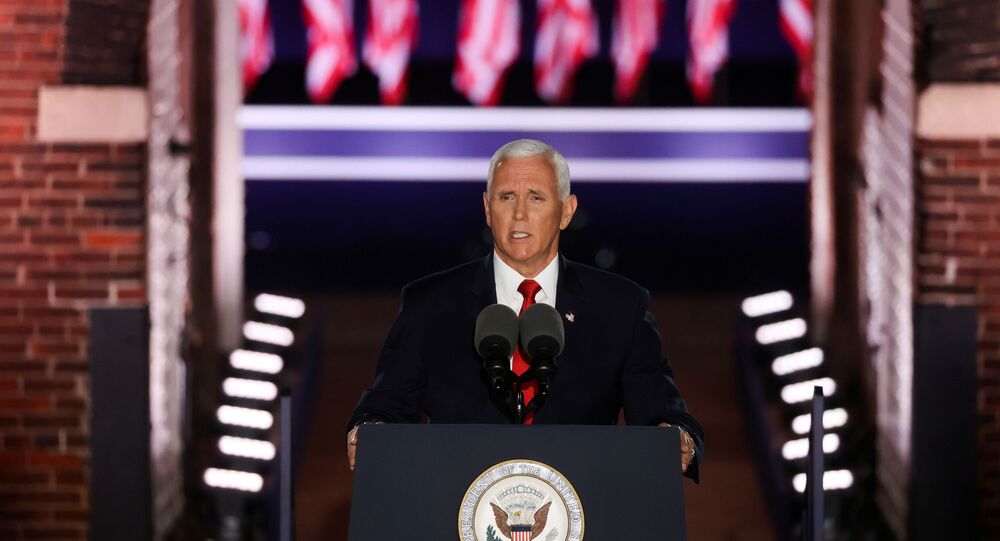 US Vice President Mike Pence formally accepted the GOP nomination, delivering a speech at the Republican National Convention on Wednesday.

"I humbly accept your nomination to run and serve as vice president of the United States," Pence said Wednesday night.

He praised US President Donald Trump for “seeing America for what it is”, praising Trump's coronavirus response and asserting that he will rebuild the country's economy after the pandemic and attacking political rival Joe Biden.

"Who do you trust to rebuild this economy? A career politician who presided over the slowest economic recovery since the Great Depression? Or a proven leader who created the greatest economy in the world?”, Pence stated. "You won't be safe in Joe Biden's America".

​The vice president also referred to the ongoing civil unrest in Kenosha, Wisconsin, that has continued for several days after a video of white police officers shooting a black man, Jacob Blake, in the back emerged online. Pence condemned the protests and called for violence to stop.

"Let me be clear: the violence must stop – whether in Minneapolis, Portland, or Kenosha. Too many heroes have died defending our freedoms to see Americans strike each other down," Pence said.

He praised what he said was Trump's key message of "law and order", reiterating support for law enforcement and praising Trump's stance on the military. Pence again referred to Biden, accusing him of intending to "defund the police" - something that violent protesters against police brutality have been demanding, and what Biden has said he does not support.

"We will have law and order on the streets of this country for every American, for every race and creed and color", Pence declared. "Under President Trump, we will stand with those who stand on the Thin Blue Line, and we're not going to defund the police — not now, not ever."

As Pence accepts the vice president nomination, Trump is set to deliver his own acceptance speech on Thursday, in a performance that will end the Republican National Convention.