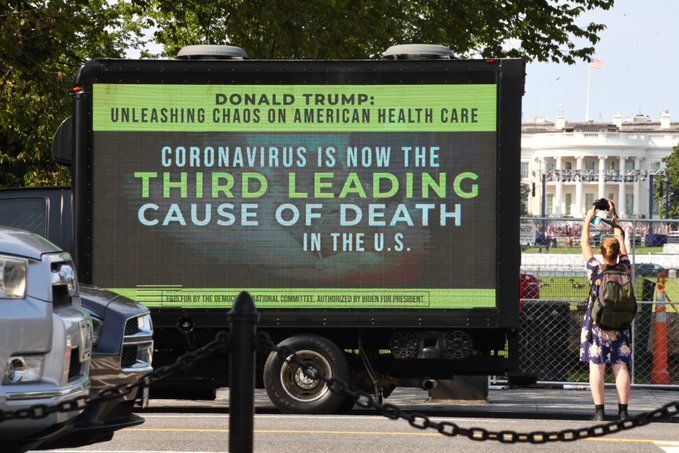 The Democratic National Committee (DNC) launched the Twitter hashtag #TrumpChaos, fueling both offline and online campaigns against US President Donald Trump, attacking the president for how he uses the coronavirus pandemic and condemning him for attempting to repeal the Affordable Care Act.

The Democratic National Committee has placed billboards and light installations in Washington DC amid the ongoing Republican National Convention. The highly-visible billboards slam US President Donald Trump for his COVID-19 response, opposition to the Affordable Care Act and economic policies.

The billboards have appeared near the White House, the Republican National Committee's offices on Capitol Hill, and by the Andrew W. Mellon Auditorium, where the GOP convention is taking place. The campaign also added light projections on the front walls of a Trump Hotel in the city, according to The Hill.

The images shared by the DNC show billboards reading “Donald Trump: unleashing chaos on American health care. Coronavirus is now the third leading cause of death in the US” The back of another can be seen saying “stop Trump’s war on healthcare".

We sent Trump a reminder of why Americans cannot afford another four years of his failed leadership. #TrumpChaos pic.twitter.com/gTgoGNNjGD

One thing you didn’t hear at the RNC tonight? A plan to control the coronavirus, support unemployed Americans, or help struggling businesses.

Trump and Republicans must have forgotten about the crisis, so we sent a reminder to the afterparty. #TrumpChaos pic.twitter.com/cJcPYnX42J

​As Republicans gather in person and online to endorse the president during the convention, Democrats have been hyping the #TrumpChaos Twitter hashtag. On Wednesday, the DNC posted a video highlighting what it described as the "health care crisis", and accused Trump of "trying to take health care away from tens of millions of Americans".

We are in a health care crisis because Trump refused to listen to the experts, didn't take it seriously, and still doesn't have a plan.

If that wasn't bad enough, he is still trying to take health care away from tens of millions of Americans. #TrumpChaos pic.twitter.com/B2VCmb2EuF

​The Trump administration has long sought to repeal the Affordable Act, signed into law by former US President Barack Obama in 2010. According to reports, the ACA caused several US medical insurance companies to leave the US health market due to high financial losses.

As the United States has registered over 5.8 million coronavirus cases alongside almost 180,000 deaths in the pandemic - by far the highest figures of any nation - Trump praised his own handling of the health crisis, referring in particular to a massive testing campaign and his intention to "eradicate COVID".