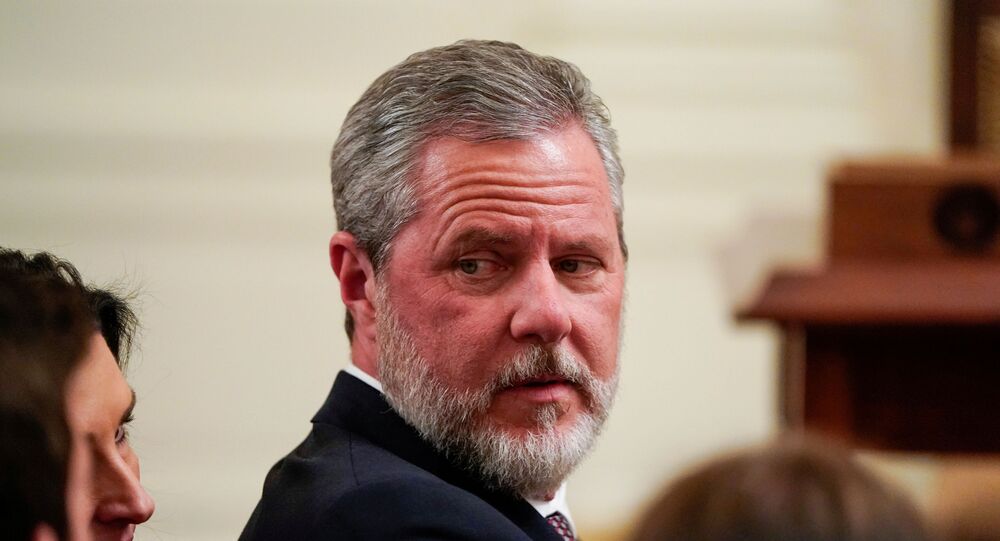 Jerry Falwell Jr. has acknowledged that his wife had an illicit affair with a Miami pool attendant-turned-business partner, but has denied having ever being involved in any active capacity.

Giancarlo Granda, the man who had a years-long “intimate relationship” with Becki Falwell, claims that her husband, evangelical leader Jerry Falwell, watched the two have sex while wearing nothing but a pair of Speedos.

Granda first met the Falwells in March 2012, when he was a 20-year-old pool boy at the posh Fontainebleau Hotel in Miami.

Becki Falwell, then 45, approached the young man while he was “chatting with some girls [his] age” and suggested they both go to a hotel room, Granda said in an interview with Politico published on Tuesday.

“Becki said, ‘Those girls don’t know what they’re doing, you need someone with more experience,’” he recounted. “And then she goes, ‘But one thing.’ And I’m like, ‘Okay.’ And she’s like, ‘My husband likes to watch.’ And just then he comes out and he’s wearing a Speedo.”

Granda says his relationship with Becky spanned seven years, during which encounters took place at the Falwells’ farm in Virginia as well as at hotels in Miami and New York. Jerry Falwell, according to Granda, would watched them “in person and also remotely through video cameras”.

They apparently parted ways last year over a business dispute: Granda accused the Falwells of backtracking on a promise to buy out his 24.9-percent stake in a cut-rate Miami youth hostel. The Falwells bought the hostel in 2013 and put Granda in charge as a manager, apart from awarding him the stake.

© REUTERS / Jonathan Ernst
Giancarlo Granda, who was befriended by Liberty University President Jerry Falwell Jr and his wife Rebecca while he was working as a pool attendant at a luxury Miami Beach hotel and was later backed by them in a business venture involving a youth hostel, poses for a portrait in Washington, U.S., August 10, 2020.

The couple, who have been married since 1987, have acknowledged the extramarital affair but denied that Jeremy was ever involved (although he did say he knew about it).

“I wish Christians and people would be as forgiving as Christ was,” Becki said in an interview with The Washington Post on Tuesday.

Her husband said in a statement: “Becki had an inappropriate personal relationship with this person, something in which I was not involved — it was nonetheless very upsetting to learn about.”

Jeremy also accused Granda of blackmailing them with threats to disclose his affair with Becki – a charge the former pool attendant denies.

Falwell on Tuesday left his position as President of Liberty University, which maintains very strict morality rules and forbids sexual relations “outside of a biblically ordained marriage between a natural-born man and a natural-born woman”. He has already been on an indefinite leave of absence after a scandal set off by a bizarre photo he shared on social media.

The evangelical leader – one of Donald Trump’s earliest backers from the religious right – posted and then quickly deleted a picture of him in unzipped pants and arm around a woman in unbuttoned shorts. He later apologised and insisted the photo was meant as a good-natured joke.

In 2019, Falwell settled a lawsuit with another young pool attendant, Gordon Bello, who alleged he had a “personal relationship” with Becki.

Bello claimed that he gave the Falwells the idea to buy the Miami hostel for $4.7 million in 2013 and was entitled to a stake in it. This was the same hostel where Giancarlo Granda – his high school friend – got a stake from the couple. The suit was settled privately in his favour for an undisclosed sum.